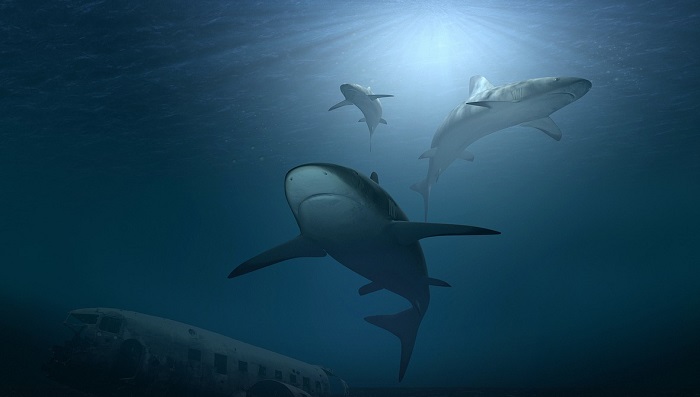 These sharks were often giant in size, like the megalodon shark, which was around 20 meters long. Sharks were called “sea dogs” by the ancient mariners.

More than 500 species of sharks with different size range exist, from the dwarf shark, which is only 17 cm long to the whale shark, the largest known fish, with the length of around 12 meters.

Sharks are mostly salt water creatures but some species can survive in fresh water as well. They are also known for their replaceable teeth.

Sharks have teeth which are replaced constantly throughout their lives. They have multiple rows of replacement teeth growing on the inside of their jaws. There are sharks which change over 30.000 teeth during their life time. The replacement happens from once 8-10 days, to once in several months.

They usually change one tooth at a time, but some species change entire rows of teeth at once. The shape of their teeth differs, depending on the food they eat.

Sharks have flexible skeletons and their jaws are not attached to their skulls. They use their tails to provide thrust and accelerate their movements.

They extract the oxygen they breathe from the seawater which passes over their gills, just like other fish do. But, unlike other fish, their gills are not covered. Instead, they are lined in a row behind their heads.

Sharks are usually cold – blooded creatures, or precisely, their body temperature is equal to the temperature of their environment.

Their digestion process takes a long time. Sharks vomit unwanted items or food, or they turn their stomachs inside out and eject such items from their mouth.

Their sense of smell is perfect and they are able to determine with precision the direction it comes from. They have eyesight adapted to the life conditions under water. It is considered that they have a good sense of hearing as well. They could sense frequencies in the 25 – 50 Hz range.

Sharks live around 20 to 30 years. Some species could live up to 100 years. The exception is the Greenland shark, with an estimated life span of 300 – 500 years, which is considered the longest life span of all vertebrate species. 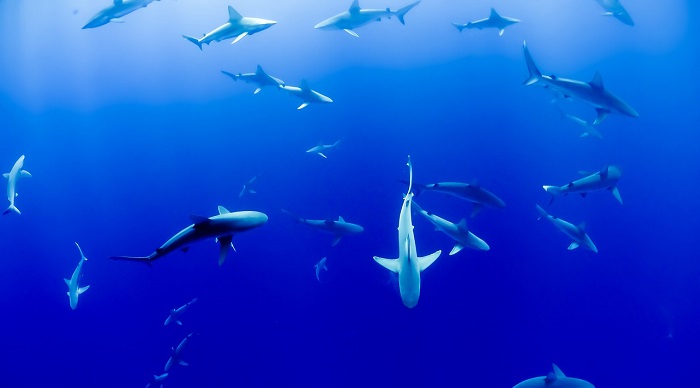 Depending on the species, female sharks can reproduce in three ways. Some give birth to live sharks, some lay eggs in the water, and some develop the eggs in their body. Sharks have a long maturing period.

Their courtship might sometimes be aggressive, with the male biting the female to show his attraction and get her attention. Some species show cases of asexual reproduction.

Some shark species are solitary types, but many prefer living in groups.

These fish are very fast swimmers. When they are attacking or feeding, they could reach the speed of around 19kph. The fastest known shark in the world, the mako shark, could speed up to 50kph. The great white shark is also fast. Sharks can cross great distances during a day (70-80 km).

Sharks have their eyes open while resting and are not truly asleep. The species which need to swim without stopping to be able to breathe, have a period of sleep swimming during which the shark is unconscious.

Sharks are mostly carnivorous, although some species feed on plankton as well. Some sharks use camouflaging technics to stalk their prey and suddenly attack. Some sharks hunt in pack of other sharks and share their prey. These are usually migratory types of sharks, which cross huge distances in search for food.

Not all sharks pose a threat to humans, and the ones that are a threat are: the tiger shark, bull shark, the great white shark and the oceanic whitetip shark.

Sharks are becoming an endangered species due to their excessive hunt, for commercial and recreational purposes. They are a common sea food in many countries. In many countries sharks are legally protected species.

What does the Shark Symbolize?

The shark has a strong and powerful symbolism.

The Meanings of Shark as a Spirit Animal

The Shark as a spirit animal can have many different meanings. Here are some of them:

Decisiveness. Not many things can avert the shark from its track when it has set her mind into a direction. If this is your totem animal, you most likely exhibit such traits. You are a determined person and don’t stop until you reach your goals. When you make up your mind about something, there’s hardly anything that could make you change your mind, or make you give up on pursuing your desire.

Personal power. The shark is one of the most dangerous animals on the planet. They are also very powerful animals. This totem animal teaches you to use your power wisely. Don’t waste it and only use it when necessary.

Fearlessness and courage. Sharks are considered fearless animals. Not many things could frighten them. This totem animal teaches you to have no fear and be courageous, regardless of the circumstances. Have faith in your ability and strength to overcome anything and anyone you encounter.

Isolation and sociability. Depending on the species, sharks can either be loners or very sociable creatures. As a totem animal, the shark teaches us about the good side of both behaviors, and you most likely embody both these traits if the shark is your totem animal.

The shark teaches us that is useful to isolate for a while and contemplate about ourselves and our lives, as well as about some actions and decisions we have made, but reminds us that it is also an essential part of our lives to be a part of a group and socialize with others.

Superiority. Sharks are considered superior predators. Some of their abilities have been developed to perfection, for example their perfect sense of smell with which they can determine almost untraceable traces of blood in the water. They also have an ability to replace their teeth and sometimes they do so in a matter of days.

Because of their many special abilities, the sharks are truly superior animals. If this is your totem animal you are most likely a superior human being, gifted with much more abilities than an average person.

Energy and movement. Sharks almost never stop moving and they are very energetic beings. The shark is encouraging you to take action and pursue your goals, and don’t let fears and doubts discourage you.

Competitiveness. The shark as your spirit animal teaches you of the need to have a competitive spirit. That helps you keep motivated and going towards your goals.

Journey and perseverance. Sharks often go on long migratory journeys across the ocean, usually searching for food. They cross great lengths to satisfy their basic needs. The shark totem animal teaches about the need to be persistent in pursuing your goals, and not allowing anything to discourage you on the quest to satisfy your desires and needs.

Moving forward. The shark never turns back at the past, but keeps moving forward, always focused on its goals. The shark spirit animal teaches you of the importance to leave the past behind and only focus on the now and the future. Focus on what will serve your highest good, not on the things and people who have long seized to do that.

Shark as Your Totem Animal

If the shark happens to be your totem animal, you can consider yourself a lucky person. It is a sure sign that you move towards your goals without fear and hesitation.

You are also very emotional and full of energy and drive. You are very enthusiastic and always on the move. You might be driven by adventures and travel to far away destinations where you can experience and learn new things.

You most likely have a developed intuition and you often rely upon it to receive valuable insights and answers from your inner being. You don’t hesitate to go after the things you desire.

You are a person who is probably in constant movement forward. You prefer a career which could enable you to keep moving, preferably with a lot of travel and action. You most likely enjoy facing challenges and you are actually in pursuit of them.

You are often a fearless person regarding your goals and nothing can stop you from accomplishing them.

The shark being your totem animal speaks about you as a determined person which almost nothing can stop when you set your mind into something.

What if the Shark Appears in Your Life?

When the shark appears in your life it calls you to forget about the fears and doubts and courageously go after what you want. It indicates the need to remove the obstacles which are holding you down.

The shark’s appearance might also indicate being protected from ruthless and dangerous people or situations. The shark reminds you of how strong and powerful you are.

This animal appearing in your life is reminding you to listen to your inner guidance and go after your desires without paying much attention to what others think or say.

The shark could also be a warning against people who could easily harm you or have the intention of doing so. The shark often appears to warn you of possible danger you might soon find yourself in.

This totem animal is a remider to openly seek for new opportunities. You need to knock on a door first so that it could be opened for you. The shark is calling you to take action; you only need to follow that call.

Sometimes the shark appears in your life to remind you that there are other things in life besides your goals. Don’t neglect yourself and your needs as well as the needs of those that are closest to you.

This totem animal sometimes appear in your life when you are going through some major emotional disturbances, to help you get through them.

In some cases, the shark will appear to warn you of someone possibly trying to take something away from you, most likely related to your job, such as your position, or take some credit for the job you have done.

If that is the case, the shark wants you to be prepared and prevent the imposter from succeeding in its plans.

When to call on Shark?

You should call on Shark as your spirit animal when:

Dreams about Sharks – Interpretation and Meaning

Dreams about sharks could be a warning about your own current aggressiveness and violent emotions. Sometimes they could symbolize someone from your surroundings having such emotions.

It might also symbolize someone who is greedy, unaware of other people’s emotions and feelings and possibly hurting others, while accomplishing its goals.

This description could refer to your traits and personality.

These dreams could also indicate feeling hostile and ferocious. Maybe you are having difficulties in your life and you are emotionally unwell. You might have some relationship problems, possibly related to the issues of personal freedom and independence.

If you dreamed of a shark circling around something, that dream could indicate having some opportunities and needing to make the most of them.

If there were a lot of sharks circling around something, maybe your dream indicates being emotionally overwhelmed and needing to release these emotions before you reach a bursting point.