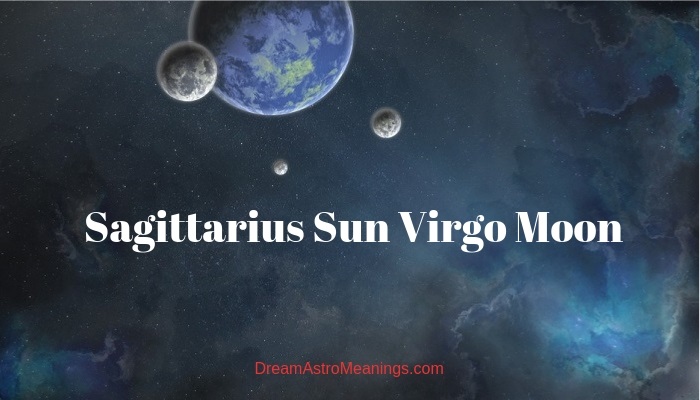 Our horoscope sun sign reveals our conscious side of personality and reactions, while the moon sign describes our subconscious reactions.

While we usually share our sun sign traits with the people from our surroundings, we tend to hide our moon sign traits or we share them only with our closest friends and loved ones.

People with Sagittarius sun and moon in Virgo have a character which is a mixture of fire and earth element.

Both Sagittarius and Virgo are mutable signs, and that gives these people a tendency to make a lot of changes in their lives.

These people are eager to explore new things and travel to distant countries. They enjoy making plans for their next trip and they usually don’t miss any detail.

Their adventurous spirit is combined with a responsible and organized nature, which rarely puts them into unpredictable circumstances and events they don’t know how to get out.

They love to read and expand their knowledge of different subjects. They are systematic in their approach to everything and learning is another area where they know where they are headed.

They usually learn things for practical reasons and they try to organize themselves best possible so they won’t waste time on things that don’t matter.

Organization is not the most prominent skill with Sagittarius people, but with this moon placement, these people are excellent at making an order and organizing things.

They are usually very independent and love to do things their way. That is why these people usually find it difficult to take orders from their superiors, but they also have issues when they live with someone.

They cannot easily adapt to other people’s habits and usually have the need to tell them how to act around them.

That attitude is usually difficult to accept by most people, which is why they prefer living on their own and making their own rules.

These people are usually very tidy, and make sure everything is in perfect order. There are cases of the opposite, where they can be prone to extreme messiness and sloppiness. These cases are fortunately rare.

They are very concerned about their wellbeing and take care of their health and general wellbeing. They are usually active sportsmen who do different kind of sports activities, usually in individual sports.

These people also pay a lot of attention to their diet, and try to be moderate about their daily intake of food. They try to eat a lot of vegetables, and many of them are vegetarians or vegans.

These people are very intelligent, and they usually have an excellent concentration, unlike typical Sagittarius which usually lack focus and are absentminded.

They can choose a profession in writing and become successful writers, critics, editors, etc. They could also choose a job in the film industry like screenplay writers.

They are usually very good at handling money and make wise financial decisions.

Unlike typical Sagittarius people who are often prone to recklessly spending money without thinking about tomorrow, these people are usually prone to saving it and investing it in their future. They are very practical and avoid wasting money on useless things.

Even though they are usually thoughtful and consider all the details before making their decisions, these people might be prone to taking risks in some areas of their lives, relying on their good fortune to grant them the success of their actions.

They often rely on their luck in their financial endeavors and investments.

Because they are usually optimistic (although there are some who are severe pessimists), these people usually manage to succeed in their endeavors and get what they want.

They are usually financially well-off, mostly due to their savvy attitude towards spending, but also because of their good luck with financial matters.

These people are not very ambitious, but they often manage to reach high due to their fortunate nature.

These people are both sociable and loners. They carefully choose their company and prefer having time alone. They can be prone to criticism and telling people what to do.

Although they might give themselves the right to comment on other people’s behavior and actions, they usually aren’t tolerant towards people who try to do the same to them.

The good traits of Sun in Sagittarius and Moon in Virgo:

The good traits of Sun in Sagittarius and Moon in Virgo:

– intolerant, prone to criticizing, prone to nagging, not commitment types, prone to telling people what to do, loners, pessimists, negative, etc.

People with Sun in Sagittarius and Moon in Virgo are usually easy-going and open to meet new people.

They don’t rush into relationships and like to take their time before getting to know the person before deciding whether to continue further with the relationship.

Of course, there are people with this sun/moon placement who are prone to being promiscuous and multiple dating.

These people often have a hard time settling down because of their extreme love for freedom and independence. They don’t find it easy to get along with someone and make compromises.

These people are often so used to being alone in their apartment that they cannot imagine someone else living there with them.

In some cases, they choose to live separate from their partners.

Marriage is another union which they often find unappealing for a variety of reasons. The main is the loss of freedom and independence and another, also important, is the need to adapt to their spouse and meet them in the middle.

They often find that impossible to do and are prone to criticizing their partners for their behavior and not doing things their way.

They are passionate people, but also need intellectual stimulation from their partners. Their partner should be someone who is smart and knows how to intrigue them with their story.

Their ideal partner should be someone they have excellent communication with.

In some cases, these people later in life change and begin making compromises because they realize that they need to respect other people’s freedom of choice as well.

They are often prone to criticizing their partners and telling them what to do, making fun at them or getting angry if they don’t do as they are told.

The fun thing is, is that these people are often unaware of the way they treat people, especially their loved ones.

They are prone to constant nagging and finding errors in other people’s behavior which usually bothers these people (especially their partners and spouses) very much.

Their attitude attracts conflicts which in turn bother them as well because they are not conflicting personalities.

These people need to learn to become more tolerant of other people’s differences and also begin accepting their own mistakes and imperfections.

They are excellent organizers and especially good when it comes to organizing the fun trips and adventures for them and their partners and spouses. They enjoy planning their activities together, and they often the best available offers for more than reasonable prices.

They usually watch over the house budget and make the final decisions on where they and their partner or spouse will spend their money and invest. Their partners can usually fully rely on their abilities.

These people don’t choose marriage easily, but when they do get married they usually are loyal and devoted partners. They fulfill their marriage obligations and enjoy spending time with their spouse and children.

These people are demanding parents because they want their children to have a good education and manners, but they also manage to give enough freedom to their children to develop their uniqueness and special talents they possess.

The best match for a Sagittarius sun and Virgo moon is Gemini or Pisces with fire and earth influence.

They need someone who will understand their need for change, and these people are the ones to do that.

They can get along well with other signs as well, but that will require a lot of compromises and adaptation on both sides.

People with sun in Sagittarius and moon in Virgo are interesting, open-minded, knowledgeable, organized, practical, and detailed. They are prone to making changes, and love to explore new places, cultures and people.

They don’t embark on their adventures without making thorough plans and considering all the details.

These people tend to be very organized and make sure they prevent any possible surprises.

They love their freedom and independence, and have a hard time giving up on them. That is what prevents most of them to settle down and establish their family.

They are also very difficult to get along with when living together because they usually have their own set of rules they make others follow, and that is often nerve-wrecking.

Their tendency to criticize other people’s behavior, especially the behavior of their partners and spouses is often the reason for conflicts these people experience because of their character.

On the other hand, they don’t accept criticism on their behalf and don’t allow anyone commenting on their behavior. Their reactions in such situations are getting angry, distancing themselves, sulking, accusing, etc.

They need to become tolerant of other people’s behavior because they risk ruining all their relationships because of it.

They often opt for not getting married, but when they do, they perform all their marriage duties well.

They make good parents who inspire their children’s growth and development of their talents, but also require them to be educated and well-mannered.