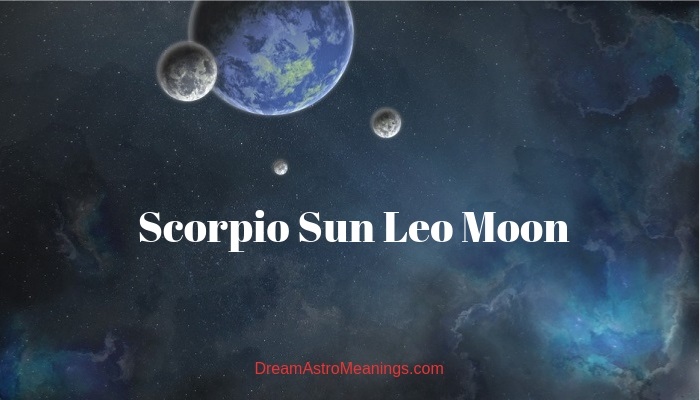 We usually openly show our sun sign side of personality while we tend to keep the moon sign side private or share it only with people we trust.

People with sun in Scorpio and moon in Leo are very confident and have strong personalities.

They know what they want and usually don’t give up until they accomplish that. These people are often considered vain and self-centered by people from their surroundings, and in some cases that is absolutely true.

They are aware of their qualities but can often exaggerate in showing off to others.

They love to be in the center of attention and enjoy being admired by others. The fact is that these people usually deserve to be admired because they have a variety of different qualities, but their desire is motivated by the need to satisfy their ego.

They can be very egotistic and desire everyone to comply with their desires. They are often not very tolerant of other people’s needs and are focused on themselves first.

These people have strong energy and it is not easy to discourage them. They are very enduring and pursue their goals with determination and persistence.

They can be considered overwhelming by many people due to their tendency to only speak about themselves and focusing on their needs first.

These people are often selfish and always watch for their interests.

They can also have a superiority complex which makes them believe that they are better than other people and they deserve better things than others. They have a very high opinion about themselves and their qualities.

Their need to always talk about themselves and be best in every situation can be irritating to the people who know them, and they might start avoiding their presence.

Not all people with this sun/moon position are like this, but a combination of these two signs gives a people great focus on themselves which in turn provokes all other issues with people.

They are very ambitious and believe that they deserve to be on the top. They usually end up there and are very successful.

Another thing about these people is that they make excellent leaders, although self-consumed and often demanding.

Their energy and drive have an almost magnetic influence on people, who instinctively feel they need to follow them.

They are often magnetically attractive and charming, and people are drawn to their magnetism. They make excellent leaders for the masses.

In many cases these people end up in managerial positions or as business owners, where they can make the most of their managing skills.

They know how to organize people but can sometimes be very strict towards their subordinates.

They often have a strong intuition and are able to almost read people’s minds. They instinctively know people’s intentions which often helps them protect their interests, but also use this information against these people.

They despise lying and cannot have any kind of relationship with people they don’t trust. It is not easy for people to lie to them because of their ability to see through people’s intentions with ease.

When someone is lying to them or trying to deceive them, they consider such behavior an act of great disrespect and underestimation of their intelligence which they cannot tolerate.

These people are honest and dignified and, in most cases, respectful of people’s rights. In some cases, these people might be prone to mentally manipulate others, or even blackmail them with the facts they know about them.

These people are excellent at finding facts about others without revealing anything about themselves.

These people are often interested in all kinds of secretive matters and secret knowledge.

They often have supernatural abilities, such as ability to see into the future, healing powers, etc. They are often interested in the occult sciences and many of them practice these sciences.

They love the pleasures and benefits money can provide them and that is what motivates them to earn it and have a stable income.

They often find themselves in positions which are well-paid, but they find ways to increase their income from other sources as well.

They could be prone to gambling or spending money recklessly. Some of these people might be prone to buying luxury items to show off and jeopardizing their financial stability.

The good traits of Sun in Scorpio and Moon in Leo:

The bad traits of Sun in Scorpio and Moon in Leo:

People with Scorpio Sun and Leo Moon are usually very charming and magnetically attractive, which provides them with many potential suitors they can choose from.

Their self-absorbed personality can appear appealing to some people, while others might find it repulsive.

Their strength of personality obviously appears very attractive to most people, and that is what attracts their partners the most.

Because they have such strong characters and powerful will, they usually manage to get whatever they want and that includes people.

If they set their intention to being with someone, they usually manage to achieve that.

They can be a bit overwhelming for their partners and spouses because they want everything done their way, and not many people are prepared to tolerate such behavior.

They are often intolerant towards their partner’s needs and that often irritates their partners and spouses because it represents lack of respect.

These people can be disrespectful towards other people usually because of their need to be in the center of attention and everyone listening to them.

They need to learn to be more respectful towards other people (especially the ones they care about) as well as to make compromises and be tolerant towards their opinions and not just insisting on imposing their will to others.

They are emotional and often seek a deep emotional bond with their partners.

These people are usually very passionate and have a lot of opportunities to satisfy their physical urges because many people find them attractive.

In general, these people are not promiscuous, but can be prone to changing partners until they find the right match for them.

When that happens, they usually don’t have the need to look any further and become loyal and devoted to their partners.

Their partners should have a calm and tolerant nature to be able to accept their sometimes “hard to swallow” behavior.

They should be confident and reliable like these people are. In time, they might learn to be more tolerant of their partners and spouses and more appreciative of their opinions.

Some of these people never learn to behave in such a manner. They usually end up with partners who have much weaker personalities than theirs, and don’t mind being told what to do or being organized by others.

If they end up with a partner who has a need to express their desires and make a compromise in a situation which concerns both partners, it is likely that their relationship or marriage won’t last long if both sides don’t find a mutual agreement.

Their partner should be a passionate person like they are so they could satisfy their strong physical urges.

They often desire someone to admire them and their abilities, and if the potential partner is someone who doesn’t understand that, possibly that the relationship won’t even begin or will somehow be filled with conflicts.

These people need to be admired and they are not interested in people who aren’t able to fulfil that role.

They make good long-term partners and spouses and are usually responsible regarding their relationship or marriage roles.

They usually love children very much and desire to have a family of their own as soon as possible.

They make tender and caring parents and they want their children to have the best possible.

They often try to send them to the best schools and provide them with the best education money can buy. Their behavior is partially motivated by their desire to show off.

The best match for a Scorpio sun and Leo moon is another water or fire sign.

A fire sign should also have some water element, preferably Scorpio influence in their natal chart.

Earth signs with water or fire element are also a good choice.

Air signs are not a good match, unless they have some water in their chart (preferably Scorpio).

People with sun in Scorpio and moon in Leo have strong and confident personalities.

They know what they want and know how to get there. They are not afraid of hard work and are motivated by success.

Many of them are self-centered and focused on themselves.

They are egotistic and often have a superiority complex which makes them have a very high opinion of themselves and their abilities and think that they are better than others. They love success and aim to succeed in their goals.

They are often in managerial positions and often become directors of their own businesses. They have prominent leadership skills and personal magnetism which makes people follow them.

They are also magnetically attractive and charming and have a lot of potential suitors. They are prone to changing partners until they find the right match for them.

Their character is not easy to deal with, and their partner needs to be very tolerant.

They are prone to imposing their opinions onto others, which is why they have problems in their relationships and marriages.

They love the security and benefits money provide and that is why they manage to establish financial security and stable incomes.

They are protective and caring partners who provide the best for their children. They are emotional and very passionate.