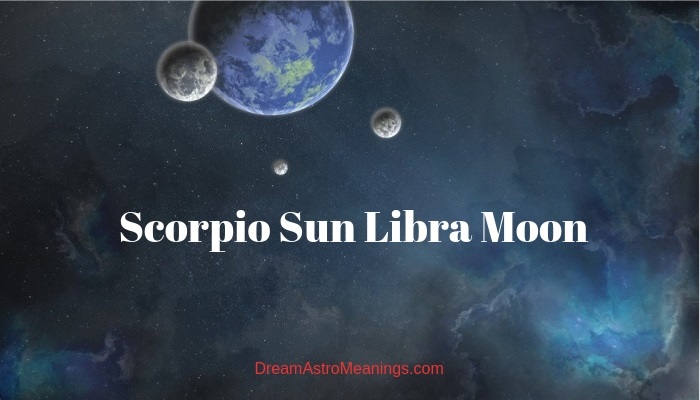 To the people from our surroundings, we usually present our sun side, while we usually keep our moon side private, or we only share it with our intimate friends and people we trust.

People with their sun in Scorpio and moon in Libra have a personality which is a mix of water and air element. These signs are ruled by Mars and Venus, the god of war and the goddess of beauty and love.

People with this influence have a mix of traits of both signs. These people are confident and self-aware, but they are also kind and thoughtful about other people’s feelings and needs.

These people are firm and flexible at the same time. They don’t change their minds easily, but are ready for compromises and accept other people’s opinions and arguments when they realize they are right.

They usually have a harmonious and balanced nature, but can also be prone to aggressive outbursts and conflicts when provoked. These people can sometimes appear like Scorpios and sometimes like Libras.

Their nature is predominately mild and they have a calm and friendly approach towards all people.

That is one of the reasons many people don’t realize the strength of their personality.

People with bad intentions might perceive them as weak and easy to manipulate and use.

That is when Scorpio enters the scene. These people have a powerful intuition and ability to discern people’s intentions.

They are almost impossible to be lied to because they see through people’s motives and know their thoughts. They are excellent connoisseurs of human nature, and they immediately realize whether a person is predominately bad or good.

They are also good at recognizing people’s energy and spot negative people from a distance.

They easily receive energy from other people, both good and bad, and that is why they should be careful not to become overwhelmed with other people’s negativity.

They instinctively feel when someone is going through a difficult period and their reaction is to offer help to these people because they are highly empathetic and intuitively know what to say and do to ease their pain.

During that process they often receive some of most of these people’s negative energy which then becomes their problem and they need to release it.

They need to learn to protect themselves from other people’s negativity and not to expose themselves to them.

They also need to learn to take care of their needs first and then offer help to others because they often end up exhausted and overwhelmed with other people’s problems and don’t have enough strength to deal with theirs.

They need to recharge their energy and be with people who give them energy and not just take it away from them. That is very important for their mental and physical stability.

These people need balance and stability and they easily become overwhelmed with other people’s situations, especially if these people are someone close which makes it essential to remove themselves from any toxicity as soon as possible.

They are kind and gentle souls who are always ready to help anyone.

These people are often taken for granted and suffer from lack of appreciation because they offer their help without being asked and they attend to other people’s needs before their own.

Because they don’t value and appreciate themselves and their time, other people don’t consider it as something valuable and special and they begin taking it for granted, which hurts these people a lot because they would like to be appreciated for all the sacrifice they are willingly making for others.

At one point, these people realize that they need to focus on themselves first and appreciate themselves more and that attitude will change how others perceive them.

What usually happens is that when they begin focusing on themselves and restricting the services they once selflessly offered to everyone, people begin appreciating them and their time and help more.

These people are usually ambitious, but often rely on their luck when it comes to success and financial rewards for their work efforts. They often manage to succeed with the help of some fortunate circumstances.

They are direct and openly speak their mind, but try to avoid directly offending others.

These people are not as brutal and honest as some Scorpios can be because they want to try as much as possible not to hurt someone’s feelings.

In some cases, they might exaggerate in their respect for others even though other people don’t deserve such treatment from them.

These people don’t have weak characters and they don’t behave in such a manner to please people; they simply care about people’s feelings and they don’t want to hurt anyone even unintentionally.

They are also very concerned about other people’s opinions about them.

These people love beauty and often have artistic skills.

They also have a good personal style and taste on which many people envy them. In some cases, they might be prone to indecisiveness and taking too long to make up their mind about matters (regardless of their importance).

The good traits of sun in Scorpio and moon in Libra:

The bad traits of sun in Scorpio and moon in Libra:

– indecisive, worrying too much what other people think, etc.

People with a combination of sun in Scorpio and moon in Libra are both romantic and passionate.

These people desire partners who are good looking but also fiery passionate.

They are emotional and seek deep emotional fulfillment in their relationship, but that includes a passionate relationship with that partner.

They have strong physical urges and need to fulfill them; otherwise, they won’t be satisfied in a relationship with a partner who isn’t passionate and cannot adequately respond to their initiative.

These people are often good looking and attractive. They usually have a lot of potential suitors and opportunities to choose from.

These people are commitment types and seek for long-term partnership or marriage.

They might be prone to changing partners while they are looking for the right person, but they are eager to settle down.

When they find the right one, they become a loyal and devoted partner or spouse.

Their ideal partner should be someone who has a strong personality and is very confident.

That person should also have a harmonious and balanced nature and be prone to making compromises. They want equality in all their relationships, especially their romantic ones and marriages.

These people have the need to come to an agreement about all matters regarding their partnerships and don’t like to be told what to do.

They can sometimes be prone to imposing their opinions on their partners, but they prefer making an agreement with them about every issue they have.

In some cases, these people might be prone to indecisiveness and taking too long to make up their mind about things; that is why they need a tolerant and patient partner who won’t have a problem supporting them and helping them in the process of decision making, without trying to impose an opinion.

These people love the idea of partnership and often put their partners and spouses before their children.

It might sound surprising to many people, but these people consider very important to nurture their relationship with their partners and spouses, which in turn helps their mutual care for their children.

As parents these people are liberal, but maintain control over their children’s actions and behavior.

They are diligent and make sure their family has all its necessities. They are good providers.

The best match for a sun in Scorpio and moon in Libra is another Scorpio with air element.

These people could get along with any sign, providing their partners have some additional S Scorpio and air influence in their natal charts.

These people need someone who has a strong personality, but is also tolerant and understanding.

People with sun in Scorpio and moon in Libra are confident and usually have a balanced nature.

They prefer harmonious relationships with people, although at times they could be prone to aggression and conflicting behavior.

These people are usually good looking and prefer partners who are attractive and good looking.

They are also passionate and prefer their partners to have similar preferences.

These people are helpful beings and enjoy helping people even without being asked to.

They often have empathic abilities and can sense what others feel, which is why they instinctively know what to do, to ease their pain.

They are often treated with lack of respect because they don’t know how to value their time and services and put others before themselves.

If they often experience similar situations, they should begin focusing on themselves for a change; when they begin doing that, others will begin appreciating them more and valuing their deeds.

They are passionate beings and very energetic. They are ambitious, but often rely on their luck to succeed. They are usually art lovers and often have artistic abilities.

They also have a great personal style which others admire. They are usually very intuitive and able to read people’s minds.

They are also able to sense other people’s energy and feel when people have good or bad intentions.

They are prone to receiving people’s energy and often become overwhelmed with the negativity of other people’s problems.

That is why they need to learn how to protect themselves from the negativity of other people.

They can be indecisive and need a lot of time to make their decisions at times.