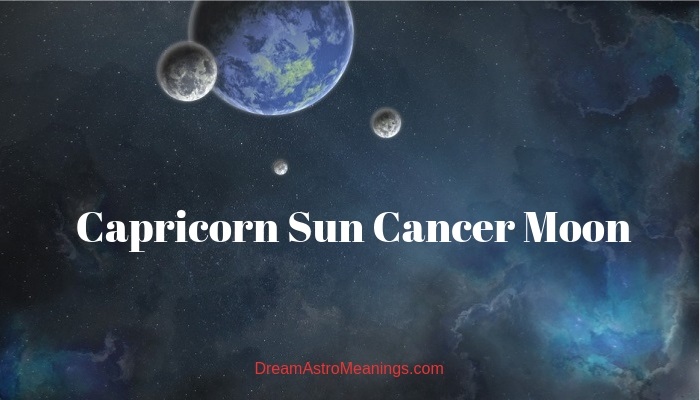 The position of our sun in a certain sign of the Zodiac describes our outer personality and our rational side of character. This side is usually visible to the people from our surroundings.

Our moon sign describes our inner being and our emotions. The moon shows the side of our personality that we usually choose to keep hidden from others or we share it with the people we love and trust.

People with their sun in Capricorn and moon in Cancer are a combination of earth and water sign.

These people are usually very emotional but are very closed off and distant. They almost have a wall which serves as a barrier to protect them from being hurt by other people.

These people often carry some wound from the past which prevents them from being open to people.

The sign of Capricorn adds rigidity to their personality and they often appear unapproachable.

Many people perceive them as arrogant which they often are; in many cases, it is just their mask which they use to scare people off, or keep them on a safe distance.

It is hard for these people to relax and they need a lot of time to get to know someone before they are able to do that. They are very emotional, but don’t allow that to be seen.

People could often have the impression of them being closed off, cold, distant, and not at all emotional, but in reality, the situation is quite the opposite; usually their feeling of unfitness causes them to feel and act in such a manner.

They seek financial stability and it is very important for them to have some money set aside just in case. They are prone to saving money rather than spend it.

These people don’t like wasting money on useless items. They prefer investing it into things which will in turn bring them more income.

They have a talent for making wise financial decisions and they usually manage to become very successful and financially well-off during their life.

These people are ambitious and they don’t mind putting in efforts to achieve what they desire.

They have many goals and they strive to acquire a higher position in life than the one they have.

Sometimes, these people might be prone to focus on themselves and disregard other people’s needs.

They are emotional and afraid of being hurt, but they often aren’t sensitive enough to mind how other people feel. They could easily hurt other people’s feelings with being overly consumed with their needs and desires.

Some of them are prone to talking about their problems and issues and bothering everyone around, but they are not at all interested in hearing the same from other people.

They are not aware of the hurt they might be causing them and don’t accept being criticized for their behavior.

These people are also prone to mood swings and can suddenly become distant and silent without explanation. These mood swings usually happen during moon phases.

Moon influences these people more than others because it is placed in Cancer, the sign which the Moon rules.

These people can also be prone to nagging, sulking, accusing others, and similar behavior.

They are not very sociable and often have a problem making contacts with people because they are shy.

There are different examples of people who are completely opposite, but in general, these people tend to be surrounded only by the circle of their closest friends and family members.

These people are family types and love to spend time with their families.

They are also home types and prefer spending their free time at home. They do almost all their socializing at home, inviting friends over to their place.

These people are usually very welcoming and have a nurturing and caring nature.

They desire to do everything possible to make their guests happy. Only special people can be invited to their home and that is why they have such treatment.

These people are also good cooks and enjoy preparing delicious meals for their guests.

They are very responsible and take care of their duties. They can often appear boring and overly organized, but some people with this sun/moon placement who are completely opposite, and can be reckless towards their obligations.

The good traits of Sun in Capricorn and Moon in Cancer:

The good traits of Sun in Capricorn and Moon in Cancer:

People with sun in Capricorn and moon in Cancer usually have a shy nature and they appear distant and closed off.

It is usually not easy for these people to relax and make the first move to approach the person they like.

They are also not easily approachable and it takes a lot of courage and confidence for people who are interested in them romantically to approach them.

They often have some past hurt/s which causes their distrust people’s intentions and lack of confidence when it comes to romantic involvements. They are commitment types usually, and prefer being in a long-term relationship and marriage.

These people usually experience two extremes: they either end up getting married early in life, or they wait until their older years, long after all their friends have married.

In general, these people are faithful and devoted to their partners. They don’t tolerate lies and betrayal and their usual reaction to such situations is ending the relationship or divorcing the marriage.

These people need to have full confidence in their partner, or otherwise they aren’t able to remain in the relationship.

These people are usually good at doing the organizing part in the relationships.

They are usually the ones who are making all the plans and organizing their joint activities. They prefer being at home and spending their leisure hours there, and that is why they seek a partner who will have the same preferences.

These people usually don’t have an adventurous spirit and they feel safest and best when they are in the comfort of their home.

That is why they enjoy making plans for joint activities with their partners and spouses there, as well as inviting their mutual friends and acquaintances.

Although they might appear stiff and rigid to the people who don’t know them well, for their loved ones they can be the epitome of tenderness, good laugh, and interesting conversations.

The reason is their need for time to relax and begin showing their true personality.

Their partners should be emotional and tender. They should also be patient and have the understanding and acceptance of their tendency to behave moody and unpredictable at times.

Their partners should also be tolerant of their need to sometimes behave bossy and impose their opinion on their partners or spouses.

In general, these people make good partners because they are willing to work on the partnership and maintaining its stability and longevity. They are putting in effort for long term results, which are stable and lasting relationships and marriages.

They are family types and have great respect for their families and usually their partner’s or spouse’s family. They are traditional and conservative and respect their family traditions.

These people love children and desire to have their own family. Many of them establish their families at a young age.

They are caring and tender parents who show a lot of emotions to their children, but can often be strict when it comes to their upbringing.

They desire their children to be well-mannered and educated, and they try their best not to spoil them.

They try to teach their children the true values in the world and make them appreciative of the things and opportunities they have.

People with sun in Capricorn and moon in Cancer are emotionally demanding and they need a partner who will be tolerant and patient enough to wait for them to open up and put up with some other behavior regarding their emotions.

The best match for a Capricorn sun and Cancer moon is another earth sign with water element in their charts.

Air and fire signs are not a good idea for these people, unless they have some prominent earth and water elements in their chart.

These people are very emotional, but are often shy and unfit, which prevents them to openly express themselves in the presence of others.

They can also be afraid of people hurting them in some way due to some past bad experiences which also prevents them from opening up to people.

It takes time and patience to approach them because they might appear closed off, cold and distant at first.

They want lasting things and are not hesitant to put in the necessary effort for their relationships and marriages to be stable and lasting.

They are tender and gentle towards their partners and children, and are very protective of their family members in general.

They are usually good providers and make sure their loved ones are taken care of.

They can be prone to moodiness and frequent change of mood and behavior which is something people from their surroundings should get used to.