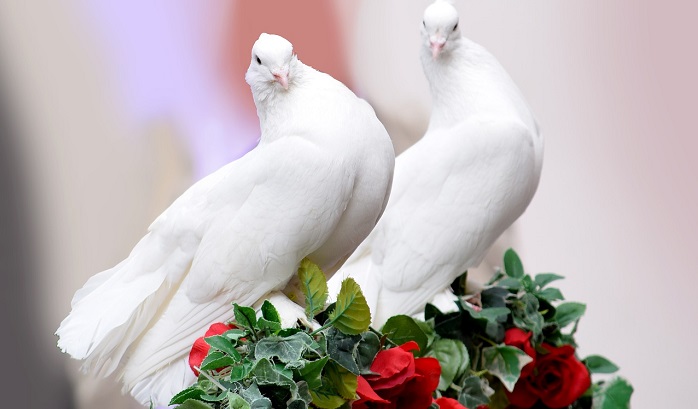 Doves are beautiful birds with significant symbolism. These birds form partnerships which last a lifetime and are devoted partners and parents. Since ancient times, they have been considered a symbol of eternal love and fidelity.

Doves have special courting rituals. They consist of bowing, fanning their tails, puffing their necks and flying in unique patterns. They also produce a special cooing sound during courting. They have developed an art of seducing their mates.

After coupling, these birds are never too far apart. And if another bird tries to interfere, they quickly find a way to inform the outsider that it’s not welcomed. Their fidelity and loyalty is a real example for us humans as well.

Doves are also good at parenting, and they do this role together as well. The partners build their nests with joined forces. The males also help the females incubate their eggs.

Dove females have a unique ability among birds to produce special secretion-milk to feed their chicks. They are devoted mothers before and after the chicks are hatched.

Doves are symbols of love, hope, and peace. They are also considered God’s messengers, and that is a widely spread symbolism in many world religions. They were often considered symbols of the souls of the departed.

A dove appearing in a person’s life is often considered someone close, who is no longer alive, appearing to this person as a sign of support and protection during difficult times.

The dove was considered a symbol of the Greek goddess Aphrodite and the Roman goddess Venus, which were the goddesses of love.

Dove is often considered a symbol of the soul departing the human body after death. 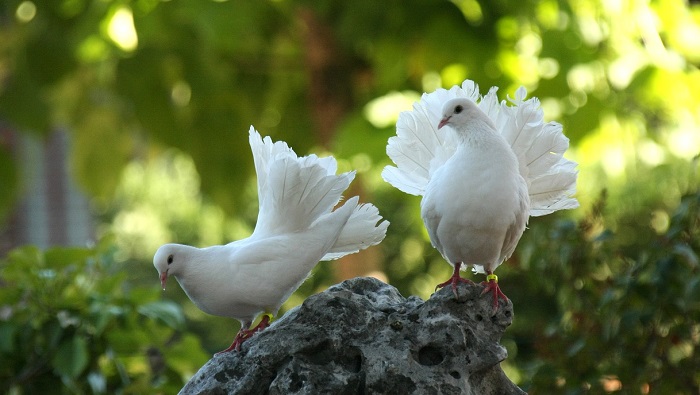 A white dove is a symbol of kindness and gentleness. Pigeons also symbolize prosperity, new beginnings, faithfulness, and loyalty. Doves are also a symbol of motherhood and protection.

As a totem animal, doves symbolize the link between the conscious and the unconscious mind.

They symbolize using intuitive insights to help us deal with some everyday issues. They represent the harmony between thought and matter, i.e., earth and air, which are both elements where the doves feel at home.

As your totem animal, the dove teaches you to connect to the insights of your inner being and apply them to your everyday issues.

They call us to release all worries and negativity and establish peace in our minds. They teach us that peace is the most important state that we need to establish.

All good things begin manifesting into reality once we establish peace in our mind, our body and our soul.

The dove totem animal is also a symbol of love and fidelity. It this bird is your totem, you are most likely a very loyal and devoted partner who knows to appreciate their love and relationship.

The dove spirit animal teaches you this gift and reminds you of the importance of having a committed relationship in your life and a partner you can rely on.

The dove totem will teach you to rely on your intuition and inner guidance, especially in the crucial moments of your life, when some major life-changing decisions and actions need to be made.

When the dove appears in your life, it is an excellent sign. It often represents and encouragement to keep your hopes about your future and trust that it will unfold as you have imagined.

The dove’s presence in your life often indicates angelic and other help from the spirit realms.

A dove can often be your departed loved one who is appearing in the form of a dove to give you support and encouragement in some difficult moments. A dove is usually a sign that things will work out fine so you don’t need to be worried.

Dreams about doves and pairs of doves

When doves appear in our dreams, that fact is usually a good sign. It symbolizes love, peace, harmony, and a tranquil period of your life approaching. It could also be a sign of new beginnings and releasing the old from your life.

The dove in your dream could be a reminder from your subconscious mind to listen to your intuition because it has some important messages for you.

Sometimes doves appearing in our dreams can be messengers from the spirit realms and from God. These dreams often represent a reminder to release all negativity from our lives and find peace and balance. The most important thing you need to establish is a state of being at peace with yourself.

These birds in our dreams are often a sign of new beginnings. They can announce the start of a new romantic relationship or encountering someone who can become a good friend to you.

A dream of a pair of doves building their nest, or with chicks in their nest is a very good sign and often symbolizes happiness and stability in your home. It could also indicate starting your own home and family. Doves are often a symbol of protection, security, stability, and harmony.

A pair of doves symbolism

A pair of doves symbolizes love and fidelity. Sometimes after the wedding ceremony, a pair of doves is released, symbolizing their love and commitment.

A pair of doves is often a symbol for harmonious family life and committed partnership and teamwork between partners.

Seeing a pair of doves, especially if they happen to appear somewhere near your home or work, or in some place, you tend to come often, represents a very good sign. If you are single, this pair of doves can represent a sign from the Universe that your emotional status might soon change.

Their appearance in your life could indicate the beginning of a new romantic relationship, which can lead you to marriage.

For people who are in relationships, the appearance of a dove pair in their lives often indicates moving to a deeper level of commitment, which is getting engaged, married, or even starting a family.

When you see a pair of doves, observe the way they behave. Notice how caring and thoughtful they are, how they caress and cuddle one another. They can teach you a lesson of respect, appreciation, and faithfulness.

Maybe this pair appeared in your life to remind you to return to the right path. Maybe you have stopped appreciating what you have and begun wandering around in search for someone better than your current romantic partner.

This vision is asking you to stop and reconsider what you have to lose if you continue following that path. Are you certain that is what you want?

One thing is certain. The lack of appreciation causes a lack of things to appreciate. That is the Law of the Universe.

Try not to lose that fact from your mind. And if you do forget about it, a pair of doves will always appear before you to remind you to.

It is up to you to make a decision whether you will follow their guidance or not.