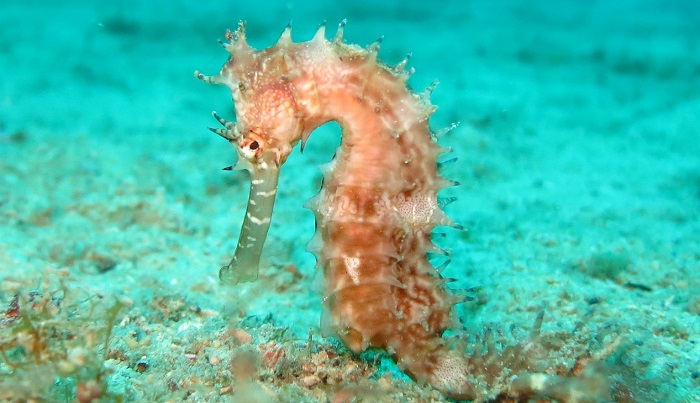 Seahorses are adorable little creatures commonly found as motif is art and design.

Even those who know nothing of their powerful symbolism and spiritual energy cannot resist their charming looks. Seahorses are a bit strange animals, with characteristic and remarkable appearance.

In addition, they are biologically quite fascinating. Mother Nature has made seahorses magical, as seen as by our eyes.

These cuties live in seawaters, just as their name says. They look like a chess figurine of a knight; they do resemble the tiniest, armored horse you could ever imagine.

Seahorses are, in fact, closely related to fish. They fall under the Hippocampus order, family of Osteichthyes, better known as bony fish, whose skeleton is mainly consisted of bones, not the cartilage.

Lovely seahorses inhabit warmer seawaters and they can be seen always swimming upright.

They appear as they are floating in waters, rather than as swimming. There are fifty-four species of these lovely aquatic animals; they similar, but vary in size. The smallest one is only about less than three centimeters long, while the largest exemplar is twenty-five centimeters long Malaysian seahorse.

Seahorses usually move pretty bellow sea surface, near to bottoms covered with sea grass and other marine flora. They usually live in shallow waters; some seahorses prefer corals, mangrove roots and such, while others like sandy or muddy areas.

However, all seahorses are commonly found near sea currents, which are areas rich in their favorite food, planktons.

Seahorses have their ways to save themselves from strong currents. They are lightweight and tiny, easily taken by the power of waters. At least, it would be that way, if they have not been equipped with especially designed curled tails.

They use tails as a rope and tightly curl them around a nearby plant or a root, in order not to be taken away by water. 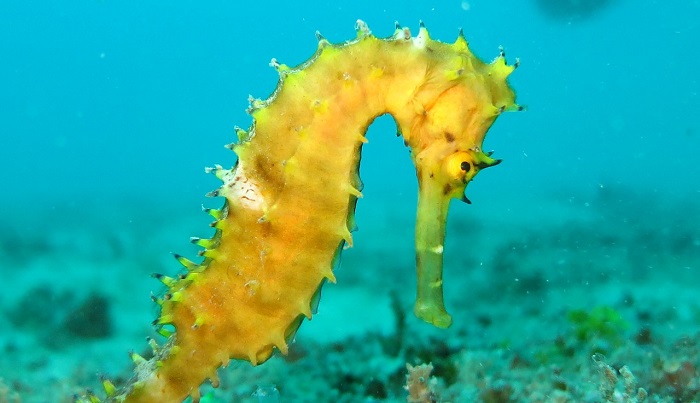 Most people around the world have an idea on how a seahorse looks like, even majority of those who have never seen these lovely quiet creatures in reality.

Seahorse motifs have been popular since ancient times, in various types of designs, from beautiful pool or wall decorations and paintings to contemporary accessories, clothes etc.

Today, seahorse motifs are commonly found in fancy summer wear and else.

However, they also have amazing spiritual and symbolic meanings, in deeper sense. In coastal areas, seahorses are a common motif of sailors’ folktales, beliefs and superstitions related to marine creatures.

Seahorses are indeed strange looking little ones. In fact, their original name, Hippocampus, actually means ‘a horse-looking monster’. It is a name of a Greek origin, built from terms hippo, meaning ‘a horse’ and campus, meaning ‘a monster’ or ‘a creature’.

Well, they are irresistible and adorable monsters, anyone would agree.

Although no one would agree seahorses are dreadful sea monsters, their specific physiology does make them appear a little bit ‘monstrous’. Seahorses have a remarkable spiky bony armor, which make them look like little dragons.

In addition, their bodies are shaped in specific manner, so they do look as little horses as well. We could agree on them looking like little aquatic horse dragons.

Seahorses indeed look magical and so intriguing to people. Moreover, there are numerous interesting biological facts about them that make them so unique amongst all animals’ world.

Besides their amazing curly tails, seahorses eyeball are also quite unusual. They can move independently of one another, so seahorses could see well on both sides.

Did you know that a part of human brain is actually named hippocampus? This partially explains the connection between seahorses and ideas of wisdom, intelligence, imagination and incredible creativity.

Seahorses represent many amazing things we will discuss a bit later.

Before we move on, let us tell you about some popular seahorse myths, legends and beliefs from different historical times and all sides of the world.

Seahorses are present in mythology of Ancient Greece. According to Greek mythology, mighty Poseidon, king of the sea and of all waters, travels the world carried by seahorses.

Seahorses are also a popular motif in Celtic and old Irish folktales and legends. In these traditions, it is believed a seahorse bring luck and fortune to sailors. They are associated with courage, hope, bravery, safe travel and fortune.

Most of positive and divine aquatic spirits and deities are associated with lovely seahorses.

For example, it is believed nymphs ride seahorses and help sailors lost at sea. Seahorses have always been considered a lucky and positive omen for everything related to maritime world.

Banners and standards of great naval forces would often feature a motif of a seahorse, to ensure safe voyage and safe return.

Seahorses are not avoided in Chinese tradition, the one with perhaps the deepest understanding of connection between human world, spiritual world and the world of nature.

Chinese see seahorses as little fortunate dragons. They believe these animals are positive spirits and fortune bringing ones. In various traditions around the world it has always been believed seahorses bring positive energy, healing and hope.

Speaking about seahorse symbolism, we have mentioned how these lovely little animals are perceived by various traditions and cultures. Their overall symbolical and spiritual meaning is probably unanimously positive.

Ancient Chinese believed seahorses specifically symbolize masculine energy and power. They would make a special healing potion out of poor seahorses in order to treat impotence and such.

It even made seahorses an endangered and very pricey species. Seahorses also represent watchfulness, awareness and creativity. They see the world in a specific way, having in mind their natural ability to see in two independent directions.

Seahorses symbolize art and uniqueness. They resemble imaginary beings, such as sirens and water dragons, for example.

We associate seahorses with everything that is mystical, magical and enchanting, in the most positive way.

There is an interesting historical notion to mention; Charles Darwin, while analyzing the incredible versatility of all living forms on this planet, claimed seahorses represent the most beautiful creatures ever to exist!

They float in the water, with no rush. They appear happy and tranquil, all the time. However, these little fellows are skillful when it comes to catching some food. They move quite slow in general, but have no problem with multiplying their speed if needed.

Seahorses represent love, care, parenthood and protection. They are specifically associated with the idea of fatherhood. In terms of reproduction, seahorses are known as truly unique and remarkable specie.

Females lay eggs into bellies of male one that carry the eggs for several weeks. These beautiful water dragons are ultimate symbol of gentleness, kindness, love and devotion.

When it comes to Seahorse totem, we have only positive things to say. Seahorse people are caring, loving, supportive and understanding. They are positive and their spread their optimism around.

However, they never impose their opinion or seek much attention. However, others respect and love them for their good hearts.

These individuals are sensible, sensitive and imaginative. They are creative and commonly very artistic.

Seahorse people are honest and loyal friends. They would never lie or cheat on you. They prefer to keep their relations direct and simple. Seahorse people do not let others manipulate and control them; they have excellent intuition.

They are not aggressive and they know when the time is to step away. They rarely seek conflict or an argument.

Seahorse people are maybe calm, peaceful and pretty quiet, but they always stand their ground and stay truthful to their causes. Seahorse individuals are patient, compassionate, caring and full of understanding.

They are open to new ideas and others’ advices; in addition, they are also good listeners and are supportive of others.

Seahorse people are guided both by their reason and by their emotions. They are affectionate and emotional ones, but they are also intelligent and reasonable. These people are joyful by nature and it is good to have them around.

They love to spend quality time with few friends and their family.

Family life means so much to them. Seahorse people are particularly devoted partners and parents.

They are supportive of their dear ones, but would never spoil them or worse, ruin their own dreams and plans. If the times hit them hard, Seahorse people are more likely to solve problems on their own.

They do not like to complain or bother other people with their worries. If they feel as if things have gone out of their power to settle them down, they would ask their closest ones for help and support.

They will always find an open door; Seahorse people maintain good relationships with other people, so others have much love for them and would always offer support.

Seahorse people are optimistic, modest and full of life energy.