Metals have long been an important element of human symbolical conceptions about the world. Our bonds with metals could be tracked far back into past.

In ancient times, people considered metals magical, since those are materials that come from the depths of the earth; symbolically, from another world, from the underworld.

Metals also come from an entirely different world, from the mysterious, outer space.

Meteoric iron, is, for example, a very interesting thing to observe. In any case, there is something so mysterious and amazing about metals.

As you probably know, metal is one of the five basic elements that constitute the world.

In Chinese tradition, for instance, they are always taken into consideration.

The Air, the Earth, the Water, the Fire and the Metal, all represent elements needed for harmony in this world.

Metals are often considered in fields of both alchemy and astrology.

These pseudoscientific disciplines are ancient and have always been in connection.

In both, metals are considered somehow spiritually ‘enriched’, to say so. 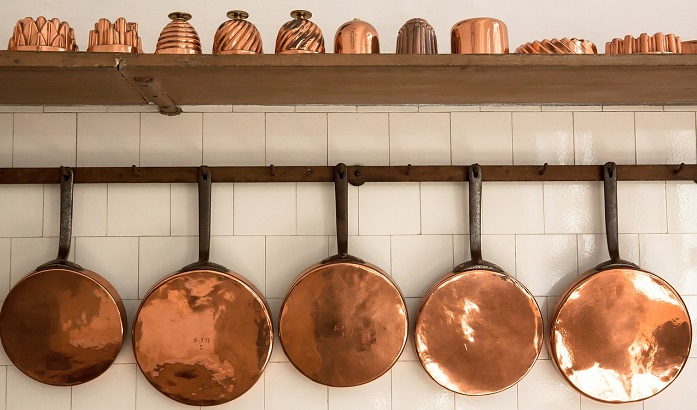 Copper is one of the earliest utilized metals. The remains of early copper metallurgy could be found in different parts of the world.

Asian, old European and Middle Eastern cultures, as well as Native American and South and Central American traditions all used copper. Here are some interesting information about the chemical element of copper.

Its name comes from the name of Cypress, since in ancient times, it was the known source of the metal. It was named aes cyprium, which literally translates to ‘Cypress ore’.

It was also called cyprium, in shortened form, and the Latin name cuprum originates from that one. In periodic system of elements, copper is marked as Cu.

Copper, gold, silver and tin were the first metals ever to be used by humans. Copper has been in use since prehistoric times; archeological evidence suggest some of our early ancestors used copper ten millennia ago.

The whole period in the history of civilization is named after copper. The period between the fifth and the third millennium before Christ is known as the Copper Age.

Tall Hujayrat Al-Ghuzlan is a notable archeological site in Jordan, telling a lot about early use of copper. In times as early as that of the fourth millennium BC, there were many advanced workshops for copper production.

The greatest pre-industrial producers of copper were Ancient Romans.

According t9o historical sources, they produced about fifteen thousand tons of copper annually.

The first mirrors were made of copper! In later ages, people started making alloys. An alloy was such a significant discovery that it made a name for another age.

It was beautiful bronze, an alloy made of copper, tin and lead. It marked the Bronze Age.

In early times, people did not differentiate lead and zinc, so the term ‘bronze’, from a modern day perspective, refers only to alloys of copper and tin, with great percentage of the copper itself.

The beautiful yellowish alloy known as brass is an alloy of copper and zinc. Brass was known in Ancient Greece. Romans also produced brass and made major changes in the way it was obtained.

In the old pre-Columbian tradition, people produced an interesting copper alloy called tumbaga. It was made from copper and gold. Tumbaga jewelry and ritual items are of exquisite beauty.

Copper ore is commonly found in places where there was marked volcanic activity and sulfur affinity.

One of the oldest and the most mysterious copper mines could be found in northern America.

These mines are as old as five millennia BC. The locality is huge by all means and there are thousands of mining pits in Isle Royal at lake Superior.

The ancient miners remain mysterious to researchers and scientists.

In alchemy, copper is associated with the planet Venus and its symbolism.

The isle of Cypress, one of places where copper comes from and was known as a source of this material in ancient times is also associated with the goddess Venus or Aphrodite, in Greek tradition.

Goddesses Ishtar and Astarte are the same feminine deity seen in other cultures.

The beautiful Venus, goddess of femininity, love, fertility and beauty was born from sea foam and is depicted as a woman of incredible, divine beauty, with her astounding, long reddish golden, copper shaded hair.

You are probably familiar with the most famous painting depiction of the birth of Venus, the masterpiece of one of the greatest Italian painters, Botticelli.

Cypress is considered a probable place where Venus was born and it is the place where copper was extensively mined since antique times.

Venus, as a planet, is associated with the goddess and is also regarded as the Morning or the Evening star.

In addition, Venus star is the brightest after the sun and the Moon, as observed from our earth. It shines with the golden reddish, copper like light upon setting and rising.

Alchemy is definitely one of the most interesting and controversial ancient views on life and the world. It is described as a science of energetic transformation.

We usually connect alchemy with the mysterious concept of the Philosophers’ stone and ideas about transmutation of metals and other elements.

However, alchemy also has symbolical meaning and it also deals with symbolical, spiritual transformation, not only material.

The lore and the science of Alchemy are complex and full of allegories. For the purpose of understanding the symbolical meaning of copper, we would try to simplify it.

They are represented by seven planets we could see with our naked eye, beginning with the Sun and the Moon.

Although the first two are technically not planets, they are seen as such, just as they are in astrology.

Each planet is associated with certain metal, with predominating qualities of the Sun and the Moon.

If you look at planetary symbols, found in both alchemy and astrology, you could see that they are designed by combining simplified depictions of the Sun, the moon and that of four elements of Earth, Water, Fire and air. These are also symbols of associated metals.

We finally come to copper. Copper is represented by the symbol that also stands for Venus. It is a circle with a cross below. The circle represents the Sun predominant quality.

This symbol illustrates the alchemic idea of infusion of solar power.

This symbol represents the aspiration of rising above the physical earthly desires. It is the idea of rising sun that is not yet perfected.

Copper cauldron is a very old symbol of femininity, birth, fertility and all that is associated with Venus. It is interesting to note how similar it is to Ancient Egyptian ankh. Ankh represents universal energy of life. Its rounded top symbolically represents the womb.

It is very similar to the idea of copper-Venus concept in alchemy.

This alchemic meaning might sound complicated, but the very essence of its symbolism correlates with that of Venus.

Considering all connections between the metal copper and the goddess Venus and all ideas this beautifully feminine deity represents, let us summarize symbolism and spiritual meanings of the copper itself.

This metal embodies many aspects of femininity in its purest form, such as maternal love, nurture, caring, fertility, and beauty.

Copper also stands for concepts of love and lust, of youth and creativity, affection and romance.

Copper is believed to be a metal that heals and is associated with ideas of universal life. Symbolically ruled by the planet Venus, copper stands for everything Venus stands for in astrology.

It inspires creativity and capability of enjoying life. It inspires kindness, caring for others and motherly, protective spirit. Venus and copper suggest love is stronger than anything else is.

The symbol of both of these illustrates the connection between the spiritual and material.

Venus is often associated with concepts of balance and harmony. In fact, its ‘purpose’ is to find a way of introducing spiritual into material world. Copper metal, associated with Venus, is probably the one of the most feminine energy.

Venus and so the copper as well stands for abundance and richness, peace and love and everything that is sweet and good.

According to experts in spiritual properties of metals and minerals, gemstones and else, copper provides good energy flow and flexibility.

It can improve communication skills in those who lack it, it helps in maintaining long distance relationships, it helps love flourish, it makes one charming and lovable, supporting the natural qualities of one owning a copper item (wearing it or so).