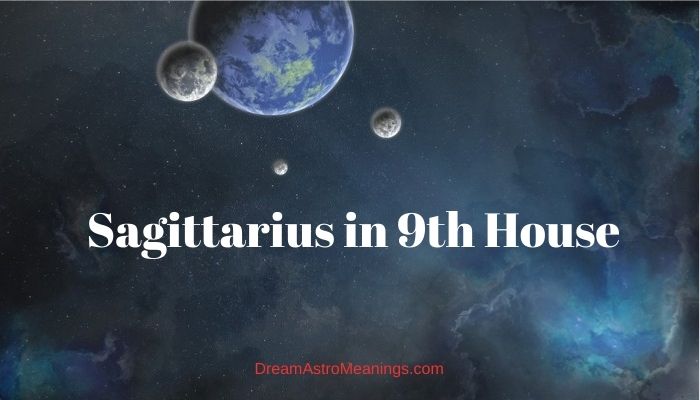 It is a great honor to be absolutely wonderful: energetic, strong, brave, inspired, noble, intelligent, versatile, all-knowing and able. He doesn’t like bores, boggles and crybabies, and he doesn’t tolerate these qualities in himself.

The ideal “I” is energetic, but somewhat abstract and not always applicable to human reality, and imprecise, albeit inspired Sagittarius ideas, flying out of his fiery bow with sharp arrows, turn into cobblestones in flight and instead of a target fall into an abandoned swamp, descending on bottom with a deep gurgling sound.

This position of the house contains the danger of the variety of demands of the ideal “I” on a person, which quickly replace one another; but in reality nothing is being done, and as a result, a general regression can occur, which can give a person extreme dishonesty.

In this case, the ideal needs to be carefully worked out in depth and to highlight really relevant features in it, making sure that they are embodied in life; in addition, you also need attentiveness, understanding and kindness, but not abstract, but based on these qualities.

Expansion of consciousness and restructuring of the picture of the world often occur superficially and more on enthusiasm than on deep understanding of what is happening, which in this case is absolutely necessary.

The attitude towards spiritual teachers is ardent, but there may be too many of them, and a person quickly cools down in spiritual training.

This person wants to see the whole world, and the very thought of distant countries and unfamiliar cultures causes him a surge of enthusiasm, but there is also a strong temptation to collect easily accessible energy tops, i.e. satisfy your superficial curiosity and limit yourself to it.

Here, elaboration can give an encyclopedic scientist, a great traveler, a polyglot, a person who owns many cultures and enriched them.

Spiritual tasks can be realized when comprehending and forming their religious and philosophical picture of the world.

Has the power of religious belief that makes her follow tradition. Shows interest in philosophy and higher education. He always tries to extend the period of study. She wants to be energetic, noble, intelligent and versatile, knowledgeable and capable. She does not like bores, bunglers, crybabies and she cannot stand these qualities in herself.

She is a realist and an idealist at the same time. Periodically, she finds a passion for changing places. She wants to see the whole world, but she is too superficial and catches only what lies on the surface. Shows adventurous travel.

Shows interest in other cultures, visits abroad. Expansion of consciousness and restructuring of the picture of the world occurs superficially and more on enthusiasm than on understanding what is happening. Prone to prophetic dreams and visions. He receives karmic tasks when comprehending and forming his picture of the world.

Even with the same move, we do not rate the 9th house as the main one, because the move is not the 9th house. Moving is still the 4th house. Yes, if we go far in search of new prospects, then in connection with the 9th.

If the move is forced or significantly reduces your social activity – then from the 12th. Well, for short distances, as you know, the 4th, together with the third.

House 9 appears to be moving abroad. In fact, it is rather a move to a different mentality, a different linguistic and legal environment, into a radically different way of life. You can move, for example, from Kazakhstan to Georgia – and this will be the 9th house (even under the Soviet Union). Or from Uzbekistan to the Baltics.

Or in modern Russia – from Krasnodar to Anadyr. This will all be a move around the 9th house (unless the 12th house intervenes, of course).

In addition, the 9th house is responsible for relocations associated with the expansion of opportunities, an increase in potency (from a village near Barnaul to Moscow – why not the 9th house?).

But, at the same time, despite the fact that according to the connection of the 9th house with the 4th in the natal chart, we assess the potential for moving, we do not focus on its condition in order to make a judgment about the advisability of moving to a specific area.

As for the 9th house in terms of foreign, everything is foreign here. If you have a completed 9th house, you may be interested in foreign cultures.

By the way, again, it is not at all necessary that it will be the culture of another country, it may just be a different culture that is not native to you.

For example, living in Kazakhstan, being Russian, Native can get carried away by Kazakh culture. Or a person from an Orthodox family finds himself in Islam, etc.

A person who was born when 9 is home in Streets is not able to withstand the prevailing public institutions. Its philosophy is based largely on common moral principles. Some of these people are all capable of studying philosophy and getting a higher education.

The society is strongly pressing on them, therefore, they suspect tend to open new horizons for themselves. Free time is preferable to spend on research and travel.

Also, trying to go beyond the common frame, they start to realize their own individuality.

9 home in Sagittarius is a person’s characteristics B the case of a man who was born, when 9 Home in Sagittarius, once they choose to do a great, wonderful work He likes to manage and give away the prizes. These people are avid travelers.

They are attracted to the unknown, they tend to reach mysteries and solve mysteries. Because of this, they can get into difficult situations.

However, they manage to get out of them quite easily.

For this, he develops his strength, the mind, tends to be merciful and courageous. One has a negative attitude towards people in whom it is noted that they are bored, melancholy or distressed. This is a rather difficult situation, leading to problems in terms of mutual benefit.

Working over his own weaknesses, he needs to learn to more easily respond to other people’s shortcomings. It is important to give the surroundings the opportunity to fix and change. And this happens due to the demonstration of real transformations on the basis of an example. Has a very energetic ideal “I”.

However, it is presented in a somewhat abstracted form, because of which it cannot always be manifested in the real world. From the suspicion of such a person, interesting thoughts often fly out, but as a rule, as a rule, they do not reach.

The problem lies in the fact that ideas change one another, because of what it is not possible to realize either one. Such a person should learn to be attentive, kind and understanding.

Otherwise, it is very likely that it never realizes until the end of any worthwhile idea.

Expansion of the consciousness of these people is easy, but quite perfect. When they make the decision to change, they overwhelm their enthusiasm, and it is precisely this that prevents them from thinking and deeply knowing all the aspects.

One if a person still finds strength and develops all of his potential, then from it you will get an excellent traveler, trainer or cultist.

As a result, it will be able to create a complete picture of the world. But it should be noted that such people are extremely susceptible to the influence of various ideologies.

Therefore, they are advised to critically interpret the information that comes to them from the outside.

However, in view of their uncertainty, they can change one group for another. The results are not very good – they do not speed up something to learn.

Such a person can strongly excite the thought of making a round trip and knowledge of the cultural characteristics of distant countries. However, even here they do not go deeper into the subject. Their knowledge of a foreign culture is limited to the study of “vershkov”.