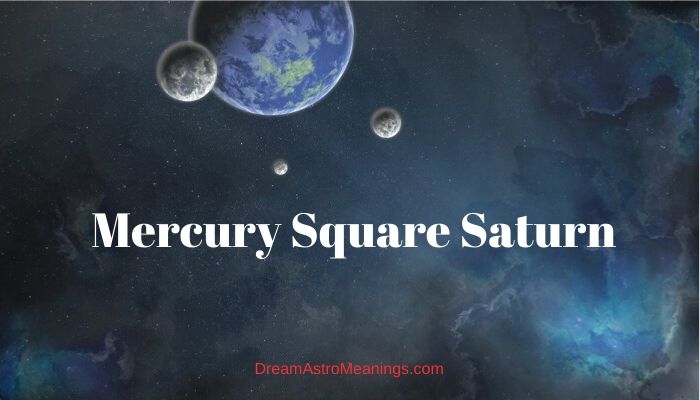 Astrology represents a practice of analyzing someone’s natal chart by using planetary meanings to determine that person’s character as well as to determine their destiny.

The natal chart is a chart of the planetary positions created in the moment of someone’s birth.

These positions and the aspects planets are forming in that moment will determine the person’s future life and their choices. The natal chart can describe someone’s personality in detail and with precision.

The aspects between the planets are especially important when they form an exact degree.

Aspects are formed when planets form certain angles. They are very important for the forming of person’s choices, traits, and their life events. Aspects are mainly divided in major and minor aspects, and they can have harmonious and inharmonious effect.

The major aspects are the conjunction, squares, sextiles, trines, and opposition. Minor aspects should not be neglected, especially when they are exact.

Squares fall into the group of major aspects with challenging nature. They create obstacles and prevent the planets from expressing their best nature.

They make people’s lives difficult and they are responsible for the bad events people experience along with other inharmonious aspects. The square is formed when two planets form an angle of 90 degrees.

Not all squares have the same nature, and some can be more difficult to deal with than others; that all depends upon the nature of the planets forming the square aspects.

The square aspect is not always detrimental. It inspires action and stimulates the person to go after their goals. It activates problems and inspires the person try to solve them.

Synastry is a technique which astrology uses to analyze relationships between people. This technique determines the potential of a relationship and draws conclusions whether the relationship is likely to last or be harmonious.

The houses where the planets are placed show the areas where the person is likely to influence their partner.

The aspects between the planets of two people can say a lot about their relationship.

Predominately beneficial aspects usually indicate a relationship that is stable, balanced, and easily flowing. The partners don’t experience any major issues and easily solve their problems as they arise.

On the other side, challenging aspects can cause a lot of problems in the relationship between two people. These aspects indicate lack of tolerance and will to resolve the issues they have.

When people have challenging aspects between their natal charts, the relationship often isn’t a lasting one. The issues could be caused by lack of basic compatibility or can be caused by outside circumstances.

The planet Mercury is now the smallest planet in the entire Solar system. Mercury was assigned that role after Pluto was degraded to a status of a dwarf planet due to lack of planetary characteristics.

The planet Mercury moves very fast, and only the Moon moves faster than Mercury. It is also closest to the Sun. It takes around 88 days to circle around the Sun.

The name Mercury derives from the name of the god of travel, trade, communication, deceit, good fortune, and trickery in ancient Rome. This god was also the god of messengers.

Mercury is the ruler of our intellect and the ability to communicate.

Mercury rules Virgo and Gemini. People influenced by Mercury are usually very curious, communicative, and always in search for news. They love being around people and learning things.

They also love to travel, and many of them are frequent travelers. They are quick witted and have fast reactions. In some cases, these people might be prone to manipulating and deceiving others.

They are usually not very emotional, but are rather rational. They learn fast and often choose professions related to communication and contacts with people.

The planet Saturn is large and only Jupiter is larger than this planet. It has a ring system composed of ice particles, rocks, and rocky debris. Saturn has at least 82 moons circling around Saturn.

Titan is its largest moon and it is larger than the planet Mercury. The composition of Saturn is mostly hydrogen and helium. Saturn doesn’t have a solid surface.

The name comes from the Roman god of agriculture. Saturn was an important deity in the Roman pantheon.

Saturn moves through one sign during a time span of around 2.5 years. That means that it takes Saturn around 29.5 years to circle around the Sun.

When Saturn returns to its natal position that period is called Saturn’s return, and marks the time of retrospection and contemplating about the achievements the person has accomplished so far in their life and the level of satisfaction the person feels regarding these accomplishments.

Saturn is the ruler of Capricorn and co-ruler of Aquarius. It is exalted in Libra.

In the natal chart, Saturn reveals the person’s responsibility and attitude towards their duties. It rules endurance, determination, stamina, and similar traits needed to achieve goals.

During important progressions and transits triggering this planet, usually some life changing events happen that cause the person to learn some significant life lessons.

A challenging aspect such as square between the Mercury of one person and Saturn of another is not an easy one to handle for both sides.

It is probably evident that the partners respect each other’s intelligence and even learn valuable lessons from each other, but with the square it is likely that they will have trouble in communication and possibly feel competitive where every partner tries to prove that they are smarter or more intellectually capable.

The Saturn person might appear very strict and serious to the Mercury person who is often frivolous and irresponsible. They are also not very practical and Saturn is often an epitome of practicality.

The Saturn person could consider communicating to the Mercury person irrelevant or a waste of time, especially when the subject of their talk is simple trivia.

Mercury can feel quite indisposed in Saturn’s company and they show it by being nervous and trying to continue the conversation further, while Saturn’s response is retreating and ignoring them further, giving them the silent treatment. This of course is not always the scenario.

In some cases the Saturn person will feel intimidated and insecure about their intelligence in the presence of their Mercury partner, who often makes them feel stupid and unadjusted.

If that is the case, they choose not to show how they feel, but intensify their silent treatment of the Mercury person.

This can often be a difficult relationship between romantic partners because it lacks the natural flow of communication between the partners, and is especially difficult for people who are supposed to work together because it is certain to cause a major rivalry between them.

Saturn often cannot tolerate Mercury’s childish and joyful nature. This can prove to be too much to handle for the serious and rigid Saturn. He might try to hide his awkwardness by silencing Mercury or criticizing them.

Since conversation is one of the most significant things for the Mercury person and this relationship doesn’t promise much of it, it is highly likely that, this will be one of the main issues that could cause its break-up.

Although secretly Saturn might admire Mercury, it is not likely that they will share this impression with the Mercury person.

On the other side, Mercury won’t have a problem admiring Saturn’s mature way of looking at things and their great experience. Saturn often has a problem accepting different ways of thinking or views on matters.

The Saturn person might try to repress Mercury’s need to look for other views of thinking and change their views on matters.

They often take the stand of someone who should be looked up to and they expect the Mercury person to follow their guidance and advice no matter what.

They can take on the role of Mercury’s teacher or tutor and they could be very offended if Mercury stops following their guidance or finds another tutor.

In this relationship, Saturn might behave possessively, trying to claim the exclusive right to give advice to Mercury even when they didn’t ask for their opinion. Such attitude might annoy Mercury and cause conflicts and disagreements that might seriously jeopardize their relationship.

After getting to know the Saturn person, Mercury might realize that their appearance is only a façade and they don’t have much to offer intellectually simply because they are so dogmatic and refuse to accept changes and change their beliefs and opinions accordingly.

Saturn might be considered a slow thinker in comparison to the quick-witted Mercury. They both get bored by each other in the end and this relationship usually fades away.

Because Mercury is not a violent type, this aspect rarely causes conflicts between them. Usually the Mercury person decides to leave after getting fed up of Saturn’s criticism and limiting beliefs.

Although this relationship often doesn’t end up being a lasting one, it carries important lessons for both partners.

Saturn might also learn to give a chance to other ways of thinking and not just stick to their own beliefs and ideas they’ve had for years.

The relationship between people with a square aspect between their Mercury and Saturn is a challenging one. Both sides need to make compromises to maintain this relationship, but this is usually not the case.

This aspect ruins the most important aspect of a relationship for the Mercury person, and that is communication. Needless to say that, communication between these two is not easy.

Saturn is to slow and Mercury is too fast. Their intellectual approach to things is completely different.

They are both intelligent, but tend to express their intelligence in a completely different way.

Saturn often takes on a role of a teacher which can be interesting to the Mercury person for some time. After a while, Mercury begins to feel bored by Saturn, realizing that they never change anything in the way they think and their attitude is too critical.

Mercury usually ends this relationship realizing that they are completely different.

If this is an aspect between colleagues it usually indicates lack of communication and collaboration between them, which often causes issues and quarrels between them.