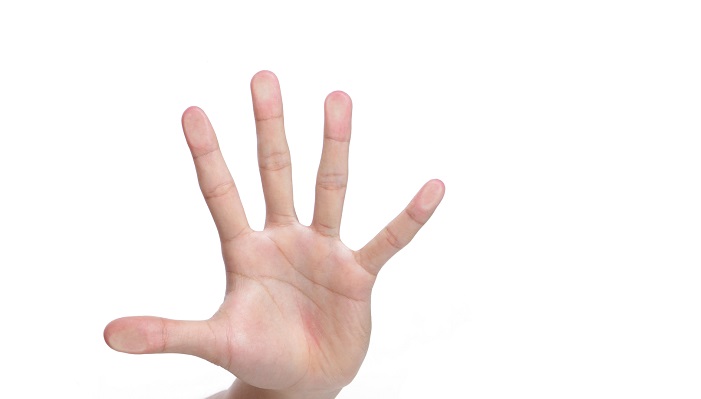 In modern times, most of people do not think witches or devils have anything to do with it, but are skeptical about its accuracy and actual application.

However, since the interest for ancient disciplines, holistic medicine and practices such as hand and foot reflexology came in focus, again, some are more likely to believe chiromancy is a real thing.

Let us back into past, for a little while. Chiromancy became popular in Europe during sixteenth and seventeenth century, thanks to ceasing of the pressure of the church against mystical knowledge, the occult and esoteric.

In fact, some of the first books on chiromancy were written at the time. Over the course of nineteenth century, palmistry became very popular. Many works had been written about it at the time.

Palmistry or chiromancy is actually much older than that. It is an ancient practice, originating from India. Ancient Egyptians and Persians, as well as Mesopotamian cultures have all practiced palmistry. China and Tibet are also known for it. In Europe, palmistry was introduced during Greek and roman era.

This old form of divination is based upon belief that a person’s destiny is written in lines on their palms.

However, it is more than palm lines, although we will focus on lines and on one of them in particular.

Before we do so, let us tell something more about basic observations related to palm reading. All characteristics of hands are important, not only those found on palms, lines in particular.

The shape of hands, nails and fingers matter a lot. The overall appearance of hands and skin are also important. If you wonder which hand to look at, most palm readers would agree left hand represents what you were born with.

The right hand is what you have acquired through life experience. Sometimes, this rule applies according to which one is your passive and which one the active hand. 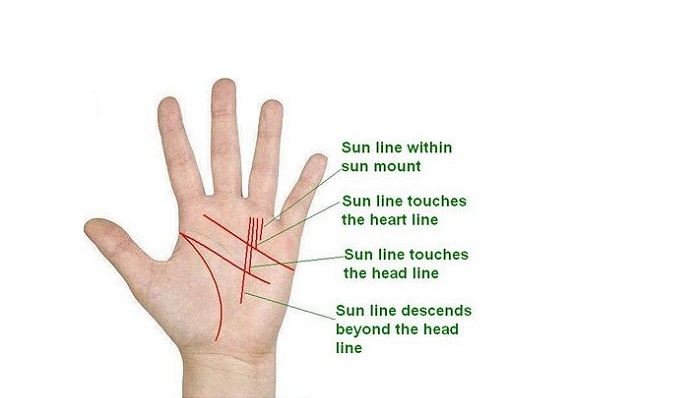 The passive is what we here described as left; of course, if you are left handed, it is your active one.

Alternative approach tells that left hand is the hand of what you have inherited and what you were born with for women and vice versa, for men. Regardless of the approach, either way you should observe both hands.

Let us say reading the left or the passive palm would be the most common option.  However, the opposite hand is sometimes considered a deciding factor in terms that it can show possible changes.

You were born with certain given characteristics, even with a determined destiny. However, the other, reflective hand shows possible alterations.

There are several classifications of the hand types in chiromancy, but we will here focus on the two most popular ones. The first is based upon the observation of the vary shape and overall appearance of hands and the other one is four-element classification scheme.

According to the first one, there are seven types of hands. Let us see what this means.

The first is elementary shape. This hand is characterized by rough, thick and short features.

Palms are typically short and square and the fingers are also short. Usually, lines are not many and are deep, easily noticeable. This type of hands tells about a practical person, usually engaged with some physical work. Square shaped hand is the second type.

These hands are usually of palms that are long and wide, with straight fingers.

Nails on square hands are also square shaped. Engineer profile often corresponds with these hands; those people are efficient in what they do, pragmatic and organized. Next ones are psychic hands that are long, conic with pointy fingers.

People with such hands are usually interested in spirituality and could even possess psychic abilities. Another conic type is literally conic hands and it is usually seen in women.

Conic hands correspond with a sophisticated, creative and artistic personality. Hands that remind of spatula are of rectangular palms with rounded fingers. People who have them are full of life and energy, adventurous and imaginative. They could be very creative.

Philosophical hands are found in people prone to self-analyses and debating. Those are bony, skinny, with visible finger joints.

The last, but not the least important are hands that represent mixed types and those are, in fact, found in the most of people. The next common classification is based on the four essential elements, so we have earth hands, fire hands, water hands and air hands.

Let us see what each type represents. The description of earth hands greatly resembles the elementary type.

Those hands are square shaped, thick and rough, with distinctive few lines on palms. They tell about a simple, practical, but suspicious and very stubborn personality. Fire hands are of rectangular palms, with short fingers.

Just as the element of fire, they are fiery, impulsive and temperamental. Usually energetic, ambitious and generally fitting well, but not particularly reliable.

Water element hands are found in intellectuals and sensitive people, who have tendency towards introverted lifestyle. They have amazing imagination and could be very daydreaming.

Now when you are familiar with the type of hand you have, let us analyze your hand lines.

There are several important ones and today we talk about the sun line. Other important lines mentioned here are head, heart, life, fate and love line. Hand mounts are also an important feature. Here we mention Mars, Venus, Mercury, Moon, Apollo mount.

Sun line is also called the Apollo line and it is one of the important lines in palmistry.

People also call it the line of happiness, since it is what the is line mostly tells about. It is called sun line, because this one is located between the Moon mount and spreads up to the Sun mount.

Sun mount is bellow the ring or Apollo finger. However, the line might be shorter and in that case, it usually begins from a higher point.

The Sun always represents success, personal potential and capacities for it. Sun is related to glory, courage, royalty, nobility and many other similar concepts, in almost all of traditions, religions, mythologies and else.

The sun is related to life and creation, as well. In chiromancy, the sun line is also the line of success. People often call it s sister to fate line.

These two lines are in tight connection. It happens that a person, for example, has a very well settled, clear and full fate line, but the line of Apollo is weak.

In this case, this person struggles hard to achieve acknowledgment for what they do.

On the other side, a weak fate line, but strong success line, means a person still has great chance to achieve recognition and success. Apollo line supports the fate line.

Some people have very short sun line or they do not have it at all. The short line is not a bad omen, as you might think first.

It actually means you are a modest person and you find satisfaction in ordinary life, you need no glory or public recognition in order to feel good.

If it was extremely short, it indicates some kind of success and recognition, but in your older age. If the line was missing, it means you have poor chances to achieve any recognition and succeed, regardless of your efforts.

If Apollo line is clear, it is a good sign and it indicates an exquisite taste in artistic field. You probably know that the sun god Apollo was also a deity of music, a patron of arts.

Therefore, if you have a clear sun line, you are very likely an artistic type. It could be the field of your success. If your sun line is narrow, it is not a good sign and it is related to frustration in life.

Narrow line indicates absence of any significant success in early years, but you could achieve something extraordinary later in life.

If your sun line begins at the root of the palm and spreads up to the top, bellow middle finger, it is a positive omen. It is an auspicious sign for marriage as well as for money matters.

If it begins at the same pace, but ends up around the central point of the palm, it indicates great chances for success at young age.

However, it also indicates very likely a decline later in life. It does not have to be dramatic, just your golden years are earlier in life.

If the sun line is intercepted by the head line, it is also a good sign for an early on success.

People who have this type of sun line are commonly very successful before their mid thirties. Those people have luck, but are also talented and capable of using it well.

If the sun line starts from the head line and then goes up, extending to the mount of the Moon, it tells about a personality who is witty and quick minded. These people usually have excellent social skills and achieve some kind of socially recognized success.

The longer is the little finger and the stronger was the head line, there are even better chances for success.

If the sun lines tarts from the center of the palm, it indicates success that comes later in life.

Maybe you will lack ideas or motivation or anything else early in life but it would not prevent you from succeeding later. This is related to gradual success that comes from effort and persistence.

People with this type of Apollo line usually face many difficulties earlier in life, but they eventually succeed, thanks to their own doing. If your sun line starts from the heart line and spreads to the root of the ring finger it is related to skills in artistic field.

This indicates a good luck in general, but it is most likely you will achieve fame starting from your forties and possibly get rich.

If the sun line begins at the Venus mount and spreads to the root of your index finger, it indicates wealth and fortune gained with the family support. It means you could count on your loved ones in these matters.

If your sun line starts at the Upper mars mount, which is between heart and head line, ending just below the ring finger, it is a sign of success related to very rational and practical approach to work.

In addition, it tells about a person that is down to earth, collected and focused. When the sun line begins from the line of fate, it is an especially good omen in terms of success and achievements.

This sign tells about great admiration and respect you will gain from other people, thanks to your hard work and great efforts invested. Sun line starting at the Moon mount tells about popularity and success achieved through others’ support.

The appearance of the line

If the Apollo line was broken, it indicates frustrations related to career.

If two parts are broken and not in line, but parallel, it is a sign of possible success later, after past experiences, even bad ones. If it was intermittent, with intersections and breaks, it means you will have trouble in achieving success and enjoying the life.

There would likely be no major successes in career terms, but it also does not mean you will be unlucky.

If your Apollo line was wavy, it is not a particularly good thing, because it tells about your insecurity.

People with wavy sun line are not ready to risk and take challenges. This insecurity would lead to unsteady success and many difficulties.

Some people have two or more sun lines. If you have double sun line, it means you are a versatile personality ad that you could actually be successful in different fields.

People with double sun line usually have hobbies that matter a lot to them. Multiple lines, three or more are not a good thing in terms of financial status.

This means you cannot organize your spending and earning very well.