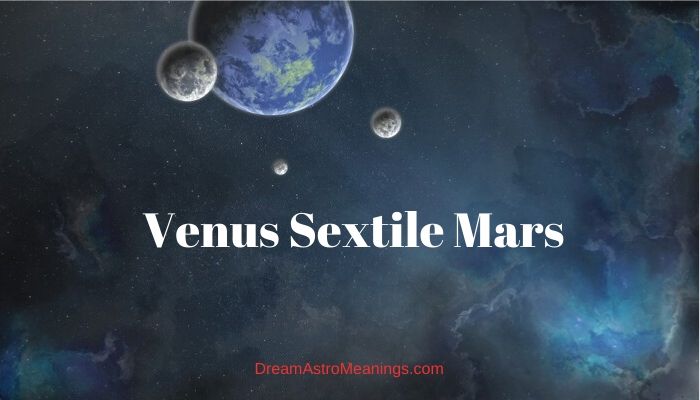 Venus sextile Mars is an interesting aspect we are going to talk about today. Aspects are one of the important elements in interpretations of natal charts.

They tell much about specific personality traits and characteristics of an individual, his or hers attitude towards life and the world.

Aspects can tell much about how a person deals with different situations in life, what qualities and talents the individual possesses, what are his or hers interests and passions.

There are several major aspects in astrology. They are conjunction, sextile (which is also considered an intermediate or a minor aspect), square, trine and the opposition.

There are also minor aspects, which include quincunx or the inconjunct (also an intermediate or a minor aspect), semi-sextile, septile, semi-square and novile. These represent angels that planets make between one another in a horoscope.

The angles are not always precise, of course, but the more the aspect (the angle) is close to the original value, the more dominant and strong is the energy it produces.

Some of these aspects are troublesome and energy blocking, while others are very favorable.

The sextile is a favorable aspect. Now we are going to see how it affects the relation between planets Venus and Mars in a natal chart.

Venus, the goddess of love and Mars, the god of war represent two powerful forces that make our world go round. We all have something of both, of course.

However, the aspects would determine on how they present their energy in a specific case.

Venus in Mythology and Astrology

Before we analyze the aspect between these planets, let us introduce you to the beautiful planet Venus, its symbolism and meaning in astrology.

The planet Venus is also known as the Morning or the Evening star. This star could be seen in the sky just before dawn or just after the sundown.

Besides Roman Venus and Greek Aphrodite, it is also associated with Ishtar and Astarte. It is interesting that it could also be connected with the ancient deity called Phosphorus. All these are the other names for the Morning star or Venus.

Phosphorus is translated as ‘dawn-bringer’. What is very curious about it is that this is the term translated as Lucifer in the Latin Bible; hence the association with the fallen angel, or ‘light-bringer’.

Well, if we return to the meaning of Venus as associated with lust and passion, it could make some sense. However, let us return to astrology. What does this planet tell about us, in a natal chart?

It represents everything we love, desire, what we are passionate about. It is associated with art, with amorousness, with beauty, aesthetics, harmony, pleasure.

It represents simple pleasures we enjoy in life (e.g., the sweetness of a chocolate cake; yes, as simple as that, exactly). The position of Venus in one’s birth chart could tell about a person’s love life, marriages, partners, lovers.

Since it is the planet of beauty and aesthetics, Venus beautifies the body part associated with the planets position in a birth chart.

In a man’s horoscope, it represents his girlfriends, lovers (if he was a married man!). In female horoscopes, it represents a woman’s seductive side, her attractiveness and her skills in love.

The planet mars is associated with deities of war, Roman mars or Greek Ares. This planet is a powerful one.

This planet could be as fortunate, just as it could be troublesome. It greatly depends on its position in a natal chart.

If Mars was in favorable aspects, its incredible energy could be channeled in a very well and a productive way. This is a planet of strength and bravery, but also anger and conflict. Mars tells about one’s way of going through life and dealing with different situations actively.

It represents the activity and energy we use straight to achieve something. Mars is associated with sports, physical fitness, health.

Although it brings troubles, battle and injuries, Mars strengthens the body part it is associated with in one’s natal chart. People who have strongly positioned mars in their natal chart are usually athletic, active.

Mars has much to do with male potency, with men reproductive potential and overall strength. In female horoscopes, it stands for her partners.

Mars stands for masculinity, for prime male strength. It represents our strength and courage. The way mars’ energy is going to manifest in reality depends on the aspects it creates with other planets.

Since this energy is very tricky and could be productive as it could present destructive, it is of essential importance to learn about the aspects and the relations it has with other planets in a birth chart.

The sextile is one of the most important aspects in the analysis of personal horoscope, although also classified as an intermediate or minor aspect. It is usually interpreted alongside the trine.

Compared to trine, the sextile is a bit heavier. It requires more effort involved into realizing its positive qualities. The sextile is indeed a positive aspect.

This one is associated with balance, harmony, compatibility, free and good flow of energy. The aspect of sextile forms a 60 degrees angle between two planets. It allows for peaceful and compatible relationship between them.

It helps one express his or hers qualities and talents within the field of personal interest. This aspect unblocks the ways of positive energy. The sextile is associated with overcoming limitations and with seizing good opportunities.

When two planets are in this aspect, it means that their energies would be compatible, used in the best way possible.

It requires your effort, of course. However, the sextile makes one recognize exactly the best elements of the energy those planets emit. The sextile supports the positive side of planetary symbolism and energy.

This aspect stimulates the energy flow and supports the positive energy.

The sextile helps in development of one’s talents and it opens up channels for using such talents. With the sextile, there are no blockages, but the road is free, open.

The sextile is not a forceful aspect; it is a balancing aspect that helps one use the best out of energies the planets in a natal chart possess.

Venus sextile Mars is a very positive aspect to be found in an individual. People with Venus sextile mars are naturally charming, charismatic and attractive. They are vital, energetic and full of enthusiasm, though not forceful. They easily win others’ hearts.

People appreciate their enthusiasm and liveliness. What is extremely interesting and good to know about those people is that they fully accept themselves as they are.

They are self-confident enough not to hide their flaws; they love themselves, but are not arrogant or too proud. They are very open, approachable and, overall, straightforward.

Their attitude towards other people is relaxed and natural, so they perfectly get along with everyone. These individuals usually possess creative skills and talents.

However, it often happens that one with Venus sextile Mars simply overlooks his or hers own talent. They see things as normal and natural to the point of taking certain gifts for granted.

Venus sextile Mars people would need some additional stimulant in order actually to use their own talents and make something out of it. It is not of the essential importance, but if you feel as if there is something you have to express, do consider focusing on it and not underestimating it.

They are often surprised when other people praise their skills or talents. They think it is just a regular thing. It is the same with other aspects of their being.

For instance, they could be very athletic and physical fit. To them, it would be just a normal thing, as everyone was capable of the same. Well, it is not!

The thing with Venus sextile Mars people is not that they do not appreciate their talents (we have seen already they are relaxed and self-content), but they do usually take them for granted. They need some stimulation from the outside.

However, it is not good to force them and insist on them actually to use their skills; worse, practically to use them. They are mostly satisfied with what they have chosen to do.

Having a relaxed approach to life, in which things go naturally, is their thing.

They would avoid of involving with the profitable side of their talents, for the sake of keeping them a genuine pleasure, for example. They love life and are passionate about it.

Venus sextile Mars is a positive aspect when it comes to love and romance. These naturally charming and lovable people would easily win the other’s heart.

They are passionate lovers, one of the best in terms of love pleasures. They need to have a close connection with their partner. Physical attraction is very important to them.

These are sensible people, who admire beauty. They are seductive, magnetic, and irresistible. They enjoy love games, but generally they are straightforward and they know what they desire for.

People with Venus sextile Mars are the type ready to fight for love, if needed. They could be very romantic and set on to win somebody over.

Their charms are hard to resist, but they are also ready to invest effort into winning over a person whom they are interested in.

They do not give up easily, if rejected, but they are not boring or forceful. They are capable of recognizing if there was another reason for someone to reject them, being interested in them anyway.

Both men and women with this aspect are perfect lovers, kind, gentle and passionate. They are warm personalities; there is no coldness in their approach. The reason for their warm-heartedness is that they are in love with themselves and with the life as it is. They are open, friendly, caring people.

They are also very protective of people they hold dear. They are natural born romantics.

What is also amazing about these people is that they are neither aggressive nor passive in romantics. They love to be in an active relationship, in which both partners are lively and imaginative.

They invest the whole of their being into a romantic relationship and they want the same from the other side.