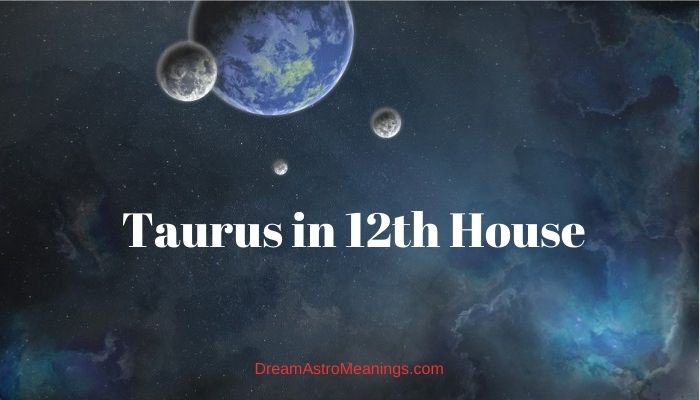 Taurus natives in the 12th house yearn for security. They like to have everything under control regarding their life and that there are no unforeseen events that alter their day to day.

When this does not happen, their emotional stability falters and they go through bad times.

This tendency towards an excessively sedentary life together with its excesses with food and drink can cause some digestive, circulatory or even related ailments with the kidneys, liver, uric acid or cholesterol.

People born in Taurus tend to feel comfortable in rural areas and nature. That is why the work of the land, whether in large areas or at the level of a small garden gives them great stability and makes them feel good.

In turn, Taurus also move like a fish in water in big cities, where they can find everything they want in terms of a rich social life, friendships and relationships.

As for business, it should be noted that they are not bad at all, since they are great negotiators, and thanks to their politically correct behavior and at their discretion they earn everyone’s trust.

In addition, with their perseverance and a good channeling of all their strength and energy, they can achieve great successes, knowing how to weather any storm and overcome the setbacks that come their way.

As for the management of their assets, the Taurus moves between two very different attitudes, on the one hand it can be of such generosity that it borders on waste and on the other it can behave in a hoarding and avaricious way under any circumstance.

Taurus may choose professions related to banking and investment, due to their tendency to accumulate.

Also, they may be attracted to professions related to commerce, crafts, fashion, construction, architecture, and especially music.

The Taurus man is romantic and sentimental by nature that is why love crises are usually a common denominator in them. They are usually charming, sensual and are attracted to beauty in all its manifestations: women, art, nature, etc.

Sex for this sign is vitally important and they integrate it into their customs as something as natural as life itself. Not for this reason, they are considered unstable or adventurous, since when they fall in love it is usually forever. Generally when they get married they remain faithful to the marriage and are patient and constant.

To seduce a Taurus it is enough to take him to a refined and well-equipped environment. He will surround you with his romanticism and loyalty, with his affection many times with a tendency to dominate.

On the other hand, he will expect you to conform to his wishes, demands, and ambitions.

Something important in the interpretation of the sun in the natal theme is that the Sun does not represent something that we already possess or are, but rather indicates the point of manifestation that we must reach.

It is a common mistake to fully identify with the Sun Sign, since we must first develop and learn all the characteristics of said sign before being able to achieve a full expression of the Natal Sun, which is usually achieved after reaching full maturity between 40 to 50 years old.

The Sun in the 12th house as a symbol of the masculine represents a confused or weak father figure.

Perhaps the father did not take an active part in the education of the person during his first years of life, or it is possible that the mother did not allow her active participation.

It is also possible that the father or mother (womb) felt physically weakened or confused before the arrival of the new being. It is also common that creativity in the first years of life has been repressed in some way.

The Sun represents the creative germ of the self in the life of each one of us, and this sun in the 12th house acts as a great treasure hidden under the rough waters of the unconscious. The person can be in a continuous search for a place and a doing where to shine with the maximum expression of it, without finding it.

It is a priority to understand that for the positive manifestation of this energy in the 12th house, the person must act in an environment that allows them to help others and avoid greedy and selfish actions and thoughts, and until this is not understood, success in life it can become elusive.

This Sun grants success in life to those who act for the common good, of course, avoiding at all costs positions in which they are at a disadvantage before others in the help that is provided, since becoming a victim is a frequent distortion with solar energy at home 12.

At the Karmic level it represents a past life where there has been a position of direction and power that could not be used in the proper way either due to abuse of it or due to non-use and now as a priority the lesson of use is learned of power for the common good. The native person of this solar position can have a Karmic encounter with another person of the Sign of Leo.

The Moon as is already known represents the maternal, protective and nurturing energy. The moon in the 12th house can tell us about a confused energy of the mother, evaded in her own reality.

It is probable that its influence on the life of the individual has not been very marked or if it is, it is idealized in some way.

It is also common that the mother of the native may have had to hide her true emotions as a way of protecting herself, a mechanism that the native of the letter also adopted.

In my experience this position of the moon is common in individuals whose mother had to do many of her activities in a hidden way in front of the person’s father, either for whatever reason, because he was too authoritarian or aggressive.

As unexpressed energy, it is essential that the individual manage to express their emotions and their feeling of security in life, since with the moon there they are repressed or blocked.

Karmic ally speaking, it can tell us about a past life where the job was to protect and feed a group of people, a family, it could even tell us about a life where it was not possible to express these feelings associated with the sign of cancer and now the need to develop this potential. There is a high probability of meeting an important person of the sign of Cancer by destination.

At the health level, because it is home to chronic diseases, there is the possibility of developing diseases associated with food and the stomach.

This will be potentiated if the moon is in bad aspect with planets like Saturn and Mars, for example Moon Square or opposition Saturn could be an indicator of anorexia or Moon square or Mars opposition of gastric ulcers.

The Celestial vault is the scene of all astrological science, it is the canvas where the great maker of the universe gave the brushstrokes, thus defining the potential of each soul that incarnates on earth to collaborate and participate in the great Work.

This great vault is divided into twelve sectors called houses, which represent every issue in the life of men on earth.

Among these twelve sectors, the houses of water that correspond to the signs of water: Cancer, Scorpio and Pisces (houses 4, 8 and 12 correspondingly) are also called unconscious houses, and the planets that are in them in the natal theme represent largely energies that do not manifest consciously in the individual.

However, of these three houses is the 12th house, which represents the most unknown and unconscious area of ​​the individual and where the interpretive theme becomes complex and confusing and this is the reason that will introduce us to the deep study of planetary energies in the mysterious house 12.

The unconscious nature of the 12th house leads us to different symbolisms and archetypes of manifestation, which must be taken into account when interpreting the energies located there.

This process is not carried out in reverse, so any change in behavior will not lead to a true change in consciousness, but to the repression of a latent energy.

Being the 12th house, the house of Pisces, as the representation of the great ocean where souls float at rest from earthly life, we find in it that small watery space where we float safely in prenatal time.

In this way, every planet housed in the 12th house will give us information on prenatal life and all emotions and experiences that the mother may have repressed during the gestation period.

On the other hand, if they achieve that desired security, they become tolerant, calm and willing to work hard for the proposed objectives. When it comes to others, Taurus natives in the 12th house are outwardly happy and confident.

However, hidden within him is the concern for money as well as for the loved ones who live with them?

And it is because of them they are willing to work hard so that we lack anything. That selfishness that they show for themselves has nothing to do with what they offer to others. A curious contradiction for the natives of Taurus in this house.

The past accompanies them in their present. Everything that happened long ago exerts a remarkable influence. So much so that sometimes they even fall ill due to concerns related to events that occurred long ago.

The problem is that they can lose their connection to the practical side of existence by focusing excessively on the events of the past.

Living attached to the past prevents them from being receptive to changes. They are afraid of everything that is new in their lives. They prefer to do things their own way, as they have always done, even though they keep failing over and over again.

The natives of Taurus in the 12th house manifest a great attraction for the spiritual life and the principles of the universe.

It is the awakening of your Cosmic Consciousness. In day-to-day affairs, their generosity is reduced as they only think about themselves and the acquisition of material goods.

To improve they must be at peace with the universe and learn to act appropriately with all the principles that are found.

On certain occasions the natives of Taurus in this house may feel inferior. It is just a psychological problem that makes it difficult to understand your purpose in life. They believe that they cannot control their subconscious and that the decisions they make are based solely on their emotions.

When they show this negative character, the best thing they can do is analyze their childhood to discover what are those memories that are influencing them to act like this.

In cases where the natives deny who they are, they generally have a fast pace of life that prevents them from stopping to contemplate the beauty.

Wanting to get everything you want right when you want it can make you less consistent. The stress caused by this situation alters their lives. What they really need is to take the time to relax.

They like solitude. They have no problem rejecting others who want to end the pleasure of such a moment. They find it difficult to show empathy or expressiveness in their conversations with others.