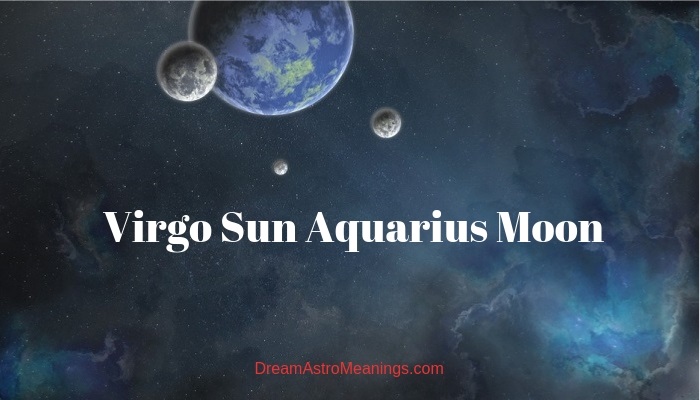 The first one is the side other people notice when interacting with us, while the other one is the side we tend to keep to ourselves or we share parts of it with the people we trust and care about.

People with sun in Virgo and moon in Aquarius are a combination of earth and air element.

The sign of Aquarius relaxes the rigidity of the sign of Virgo and gives these people a dose of eccentricity and unpredictability, which typical Virgo usually doesn’t have.

These people love a bit of adventure and although they usually love to know all the details in advance, love to do things out of the ordinary and even surprise everyone else from their surroundings that are used to their cautious and detailed approach to things.

These people are usually very intelligent and curious, and are excellent problem solvers.

The combination of their ruling planets, Mercury and Uranus, makes them often great innovators, capable of inventing things which other people will benefit from.

They have a practical approach towards things, although their way of thinking and making conclusions about matters could often not be easy to understand by others. They are very detailed and precise as well.

In some cases, they could be prone to a great rigidity of their beliefs and ideas, not allowing anyone to interfere and trying to convince everyone that their approach and way of thinking in a certain situation is the best.

They could also have a set of rules and certain criteria about life and work matters they tend to follow, but also try to make others follow, usually to their discontent.

These people can be very difficult to deal with and endure without them being unaware of that fact. Many people find their controlling behavior irritating and hard to accept.

They can be prone to criticizing and judging other people’s behavior, usually when it doesn’t fit their standards.

One of the main things these people need to learn is to stop trying to mold people into their criteria and standards and just let them be who they want to be.

By insisting on the fact that they are the smartest and always right, they only increase the possibility of creating conflicts and disagreements with others and worsening the relationships with them, which is not their intention.

These people don’t have bad intentions; it is their nature. They tend towards perfection and order (according to their standards) and they have a need to try to correct anyone and everything which doesn’t fit their picture of perfection.

It can be difficult for them to understand the need to change, but many of these people do change in years and become more tolerant of people’s differences.

They also become more adaptable and prone to compromises.

They are interested in everything new, especially new technologies. They often desire to have the latest existing technology and that is usually what they spend their money on.

They are not spendthrifts and usually don’t care much about clothes or other items. Their personal style is often eccentric.

Their attitude towards money can also be different than the attitude most people have. They usually don’t value it much, but they know that it is necessary to fulfill their needs and desires, and that is what makes them focused on earning it.

They are usually tidy and pay attention to their hygiene, but some of these people could be extremely messy and without concerning much whether they have showered or not. When they are focused on something they don’t waste their time on anything else.

These people could have some unusual attitude or beliefs which many people from their surroundings find strange or unacceptable. They usually don’t care at all about what other people think about them.

They are not very sociable and can be considered loners. These people are usually very independent and love their freedom.

These people usually don’t have leadership skills, and these roles are not interesting to them.

They are also not good for group works, and are best as individuals who have a goal they need to accomplish. They are not very ambitious, but can be very determined to fulfill the goal or idea they have.

The good traits of Sun in Virgo and Moon in Aquarius:

The bad traits of Sun in Virgo and Moon in Aquarius:

People with sun in Virgo and moon in Aquarius are not very emotional (unless they have a lot of water in their chart).

They are very independent and a bit eccentric and they often prefer not to commit and get married, but stay in an open type relationship.

The main reason is the fact that these people are very self-sufficient and don’t want to adjust or even give up on their needs to be in a commitment or marriage with someone.

They can be very selfish and self-centered when it comes to their time and their habits.

Another reason is that they usually lead a very organized life and have their priorities, which usually isn’t a relationship with someone. If they have some major goal or idea they are working on accomplishing, their partnerships will certainly not be a priority.

Not everyone with this sun/moon placement is like this, of course. When they do commit to a person, these people are usually loyal and devoted.

They are usually the ones who make sure everything is in order in their relationship and are in charge of the organizational part of the relationship, although in some cases they could be the disorganized side in the partnership.

Even the ones who decide to commit and get married will usually try to save some space and their privacy in this relationship, refusing to completely change their lives for their partners or spouses.

These people are not very emotional and they tend to have an impersonal relationship with their partners.

They are not prone to expressing their emotions and affection and are not a good match for someone who is very emotional and expects their partner to tell them that they love them every five minutes.

With these people this sentence might never be heard by their partners.

They tend to express their devotion through their actions and through the mere fact that they are in that relationship or marriage.

These people can be very creative when it comes to thinking ways of spending their time together. They love activities which engage their intellect, but they also love a bit of adventure.

That is why their partner needs to be someone who is very intelligent and inspiring, but also a person of action.

These people are often not very enthusiastic about parenting. The reason is again their love for freedom and independence and a child or children is another responsibility which is limiting their freedom.

As with other responsibilities, they handle parenting well, and try to develop their children’s intelligence and adventurous spirit.

They won’t be as strict towards their children as some Virgo people tend to be.

The best match for a person, who has Virgo sun and Aquarius moon is a combination of earth and air element.

They can also get along with water or fire elements, but their partners need to have some earth and/or air elements in their natal charts as well.

These people have the stability and groundedness of an earth sign, which is influenced by the eccentricity and unpredictability of the airy Aquarius.

That is why they need a combination of stable and relaxed energy in their partner to be able to understand them and make a compatible and lasting union with them.

People with sun in Virgo and moon in Aquarius have a unique personality. They are very independent and strong individuals.

They don’t change their opinion easily and usually try to convince others that theirs is the best.

These people are usually reliable and organized, although there are some with opposite traits.

Many of them are not fond of commitments because they jeopardize their independence and force them to adjust.

These people have a way of doing things and leading their lives and usually try to make others follow their rules. It is usually extremely difficult for them to get used to living with someone.

They are bothered if things around the house aren’t done the way they expect, or if their partners or spouses behave in a way which is not appropriate according to their standards.

These situations usually cause their judging and criticizing their partners’ behavior which in turn causes conflicts and disagreements with their partners.

Naturally, not many people accept being told what to do and being criticized because of simply being themselves.

These people should learn to control their tendency to mold people according to their standards and forcing them to change so that the relationship between them could work out.

These tendencies are usually the cause of many breakups in these people’s lives, and they need to accept that fact and their guilt.

If they don’t work on changing these tendencies and becoming more tolerant towards the behavior of other people, and not just their partners and spouses, they might end up alone and avoided by others.