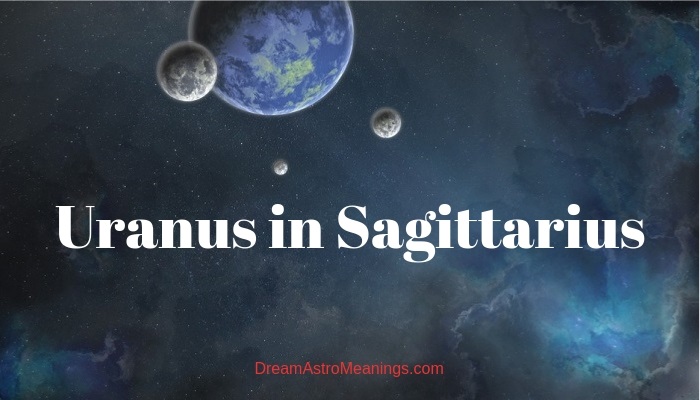 With the temperature of -224°C, the planet Uranus is the coldest planet in our Solar system. It is the fourth largest in mass, and the seventh planet distanced from the Sun. This planet is made mostly of ice and rocks.

This planet’s name derived from the name of the ancient Greek god of the skies, one of the oldest Greek deities. This god was the grandfather of the god Zeus. In the old myths of the ancient Greeks, Uranus and Mother Earth, Gaia, were the parents of the Cyclops and Titans.

In an astrological sense, Uranus is the ruler of massive global changes and transformations which unfold subconsciously or are visibly seen as catastrophes and mass destructions. This planet sets fire to sudden life-changing and awakening events which are often inevitable.

This planet is the ruler of geniality and geniuses. It rules original and unique solutions to problems and people who have a unique creativity and ability to invent and create things which will benefit others. This is the planet of discoveries, innovations, inventions, and all kinds of original thinking.

Uranus rules sports and sportsmen. It rules different sport activities, sports stadiums, clubs, sports events, etc. It also rules all extreme sports and people who do them. In general, people who are under the influence of the planet Uranus are prone to different kinds of extreme activities and love to be surrounded by people with similar preferences.

Uranus is the ruler of unexpected events and abrupt changes, unexpected behavior and reactions, and general unpredictability and abruptness. The events Uranus provokes are always sudden and abrupt and can either be positive or negative in nature, depending on the aspects causing these events.

Regardless of the nature of the events that occur, they always have a transforming role which ends the status quo and clears the space for new things to come. Uranus is the ruler of endings, but also new beginnings. It also rules accidents, sometimes with a deadly outcome.

This planet is the ruler of separation, sudden break-ups and divorces. It is the main culprit for the sudden endings of relationships where the cause is infidelity of one or both partners or where the reason is a desire for more freedom.

It rules all destruction, destructive activities, destroyers of things, dynamite, bombs, bomb explosions, bomb attacks and bombers. It also rules natural calamities such as volcano eruptions or earthquakes and other natural disasters.

It rules photography and photographers, post offices and postmen, radio, telephones, and television, as well as radio and television broadcasts. Radiology and radiologists are also ruled by Uranus.

Uranus is also the ruler of people of authority, tyrants, and all kinds of bossy people. It rules extreme actions and behavior. This planet triggers the transformation of societies and civilizational and cultural development. These changes can mostly be felt on a collective basis, and not so much from the individual point of view.

Because Uranus needs around seven years to go through one sign of the Zodiac, it influences the generation of people born during these seven years.

The collective influence of Uranus can be seen through major transformations of beliefs, consciousness, style, accepted behavior, morality, changes in perception, discoveries and inventions which benefit a lot of people, and sometimes the entire humanity. We sense these changes as part of society.

We usually sense its influence directly when this planet hits some sensitive spot in our natal chart through transits or progressions. That is when some life-changing events might occur and transform our lives as well as our beings. Uranus usually acts when there is a need for change to occur in our lives, and we have subconsciously or consciously been avoiding it.

To determine the influence of Uranus on an individual, besides the sign it is placed in, we should consider the house in the natal chart where Uranus is placed, as well as the aspects this planet is making with the other planets in the natal chart. Also, the current transits and progressions should be consulted as well.

Not all people react to Uranus’s transits and progressions. The most influenced are the ones who have Uranus as their ruler, Uranus in strong aspects with other planets, or Uranus placed in a prominent natal house.

With good aspects, Uranus usually brings sudden and abrupt changes and events with a beneficial outcome for the person, and when the aspects are bad, this planet usually brings unfortunate situations and events which in some cases cause disasters and severe changes in a person’s life, with sometimes irreparable consequences.

Whatever the overall influence of Uranus on our life is, it always brings powerful lessons we need to learn so we don’t make the same mistakes again.

In this text, we talk about Uranus’s traits when placed in the sign of Sagittarius.

Men with Uranus in Sagittarius are independent and freedom-loving.

They are philosophers, who love to make their own research and decide what they believe is the truth in different matters. They often choose the legal profession to be their occupation because they have a righteous personality and fight for equality and human rights.

These people are optimists and don’t let others discourage them from pursuing their goals which can sometimes be unrealistic.

They are helpful and tend to pursue humanitarian goals which could help humanity as a whole. They love travelling and meeting new people. They are easy going and relaxed and people enjoy being in their company.

They are often very adventurous and love experiencing new things.

Women with Uranus in Sagittarius are often very educated and in pursuit of knowledge.

These women are easy to get along with because they are very sociable and adaptable.

They love their freedom very much and make sure no one jeopardizes it. They love to travel and gain new experiences as well as meet new people.

They consider all people equal and always stand up to protect the weak. They are helpful and always come to the rescue of the ones in need.

They have an optimistic nature and always expect the best.

Some good traits of Uranus in Sagittarius are:

Some bad traits of Uranus in Sagittarius are:

It is the ruler of adventures and adventurers, exploring and explorers, traveling by plane, air transport, flight attendants, flight engineers, pilots, trade, both international and domestic, etc.

People who have Uranus in Sagittarius take actions towards the goals they have. They are often very spiritual and are often involved in pursuing a goal of spreading spirituality consciousness among people and raising their spiritual awareness.

These people have an adventurous spirit and are usually truth seekers. Uranus helps them in that quest with sudden and unexpected breakthroughs and insights about matters previously unknown.

They strive to gain more knowledge and are usually highly educated.

That is a lifelong quest for these people. They like to make their own conclusions about matters and not just accept someone else’s truth.

People with Uranus in Sagittarius consider all people as equal. They don’t make a difference between people based on their race, or other differences. They are easy going and get along well with everyone.

They tend to make acquaintances wherever they are and love to be around people. They don’t have a problem approaching people and getting to know them. These people are fighters for human rights and don’t tolerate injustice.

They have a philosophical view on life and tend to see things from a broader view. These people are deep thinkers able of significant philosophical insights about the Universe and human existence on this Earth.

Some of them have unique understanding of religion, although most of them are religious. These people often choose an occupation related to religious matters.

Uranus in Sagittarius brings these people unexpected travels, usually to distant places and by plane. These people usually don’t make plans to travel somewhere. Their decisions are sudden and unplanned and surprising to everyone, sometimes even to themselves.

They love to communicate with strangers and learn about foreign cultures. Their occupation is often related to traveling, which is something they enjoy most.

This placement makes these people freedom loving and very independent. They are born optimists who expect the best in all situations. In some situations they can have unpredictable and eccentric reactions.

These people often have a rebellious trait in their personality which often puts them into risky situations jeopardizing their safety, finances, and general wellbeing. Some of them can be prone to make unexpected actions to surprise people.

They love helping people and are usually generous. They are born humanitarians, often in pursuit of fulfilling some global humanitarian cause.

They are often in the legal profession and often responsible for major changes in the legal system. They can be successful judges and lawyers, as well as professors in Law Universities.

Uranus is one of the transpersonal planets, besides Pluto and Neptune. It spends around seven years in one sign, which is the reason why it has more influence on generations of people rather than on individuals.

To determine its influence on a person, we need to consider its placement in that natal chart of the person, especially the house it is placed in and the aspects it makes with the planets in the chart.

It is also important to consult the actual transits and progressions.

Uranus in Sagittarius people are truth seekers and love to discover their own truth about matters.

They have unique religious beliefs and are usually very educated. These people love their freedom and are very independent. They are true adventurers and love to be in constant movement.

They love traveling and travel a lot, especially to distant places. They love making new friends and acquaintances and love being surrounded by people. They easily approach people and make friends with them.

They are very interesting and people love being in their company.

They have a kind and generous nature and love helping people. They are true humanitarians who sometimes devote their lives to fulfill some global humanitarian cause.

They are often in the legal profession or choose travel as their occupation.