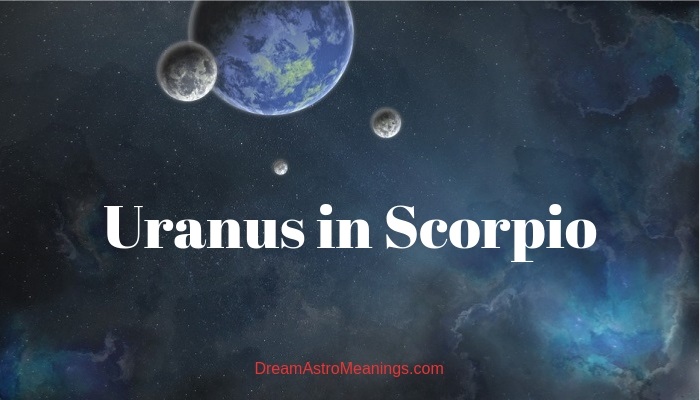 The planet Uranus has a similar composition to the planet Neptune. While Saturn and Jupiter are made mostly of gas, these two planets are ice cold and are composed mostly of ice. Uranus is composed of rocks and ice, and is considered the coldest planet in the Solar system, having a temperature of -224°C. Uranus has 27 moons.

The Greek god Uranus gave this planet its name. Uranus was one of the oldest deities in the ancient Greek pantheon of gods and was the grandfather of the god Zeus. It was also the father of Cronus, Zeus’s father. According to the ancient Greek myths, Gaia, Mother Earth and Uranus were the parents of the Titans and the Cyclops.

In an astrological sense, Uranus is the ruler of sudden, unexpected events which bring awakenings and life-changing situations in people’s lives and the society in general. this planet rules new discoveries and inventions, inventors, originality, geniuses and geniality.

This planet is the ruler of people who are able to create things that will benefit not only them, but the whole humanity. These people have a mission to make the world a better place.

Uranus rules aviation and airplanes. It also rules all matters related to planes, such as pilots, air mechanics, airports, air travel and transport. This planer is also the ruler of other means of transport as well as transportation vehicles. It rules the drivers of these vehicles as well as the mechanics that repair them.

Uranus is also the ruler of sports and sportsmen, all sports activities and sports events, games, sports stadiums and clubs, etc. It also rules extreme sports and activities. People with prominent Uranus, especially with Aquarius sun or ascendant sign are often into all kinds of extreme actions.

Uranus is the ruler of travels and travelers, especially sudden travels. This planet rules adventure and exploration, explorers, discoveries, inventions and inventors, etc.

This planet rules eccentrics, unpredictable, and people who lack control over their actions. It is the ruler of all kinds of extremes. It also rules freedom and desire for freedom which often inspires irrational and uncontrollable reactions in people.

The nature of Uranus events is transformative and leaves behind dramatic changes. No stone is left unturned when Uranus arrives. People get out of these events as completely transformed beings, and their lives are never the same.

Depending on the nature of the aspects Uranus is making with other planets in the person’s chart, the experiences might be good or bad in nature, but they usually represent some kind of ending and leaving the past behind so that new things could enter a person’s life.

Uranus is the planet of endings and new beginnings. Its actions always bring a lesson into a person’s life, one that should be learned, or some new lesson will soon follow, with even more drastic consequences.

When people refuse to change or accept some change the Universe arranges things to happen by force. If the ignoring and avoiding have been going on for a long time, the events that might befall on a person and their consequences become more severe.

Uranus is a planet of separations, break-ups and divorces. Bad aspects of Uranus in a person’s natal chart, especially with Venus or other personal planets, usually create relationship issues and rash endings. The main reasons could be infidelity or freedom issues.

Uranus brings sudden money loss and in worse cases, bankruptcy. It is also the ruler of accidents sometimes with a deadly outcome, usually when it is severely badly placed in a person’s natal chart.

This planet rules destruction, destroyers, and destructiveness. This planet rules all acts of destruction whether from natural or human causes. It is the ruler of all destructive items, such as bombs and dynamite. It rules bomb attacks, bomb explosions, bombers, etc. It also rules natural disasters such as volcano eruptions, earthquakes, and other catastrophes.

This planet rules electricity and electronics. It rules all electrical appliances, their manufacturers and dealers, electrical engineers, mechanics, etc. It is the ruler of engineers in general. It rules magnetism and magnets.

This planet is a transpersonal planet and transits through a sign during a period of seven years. During that transit, it influences generations of people born in that time span. Its influence is felt globally as a massive change in people’s consciousness.

Its influence on individuals could be determined through combining the meaning of the sign it is in, the natal chart house it is placed in as well as the aspects it is making with other planets in the chart.

People who have prominently positioned Uranus in their charts are very sensitive to its movement through sign and the aspects it is making or receiving in progressions and transits. These are especially people with Uranus as their ruling planet, and/or Uranus in strong aspects with other planets in the chart.

When determining its influence on a certain individual, it is very important to take into consideration the current transits and progressions. When Uranus gets triggered by a transit or progression, usually life-changing events begin occurring in a person’s life.

In this text, we are talking about the traits of people with Uranus in Scorpio.

A man with Uranus in Scorpio is often magnetically attractive and has a powerful, almost hypnotic influence on other people. These men know where they want to be and are determined to get there.

Nothing can discourage them from the path they have chosen to walk on.

These men, especially if they have Uranus in bad aspects to other planets, can be prone to uncontrollable reactions and behavior, accidents, aggressiveness, outbursts of anger, etc. They need to learn self-discipline and control their actions.

They are good psychologists and very intuitive. They instinctively sense other people’s feelings and know immediately who they are dealing with.

Many people admire and respect them, and fear them at the same time.

Women with Uranus in Scorpio can be overwhelmed with negative feelings such as jealousy, envy, obsession, etc.

Like men with this placement, people usually find these women magnetically attractive and want to be in their company.

These women are a powerful source of energy which they selflessly share with those around them.

These women are very determined and are not easily influenced by others.

They are interested in subjects like the occult and the secret mysteries and often possess great knowledge and even actively practice them. They can be prone to angry outbursts and uncontrollable reactions and they too should learn to control their actions.

Some of the good traits of Uranus in Scorpio are:

Some of the bad traits of Uranus in Scorpio are:

In Scorpio, Uranus is in its sign of exaltation, which makes it easy for Uranus to express its full potential.

Scorpio is the sign of secrets and secrecy. It rules mysteries, the occult and occult knowledge and powers. It rules death and all death-related matters, like funerals, graveyards, cremations, embalming, etc.

Scorpio is the symbol of chemistry and laboratories, dentists, pharmacy and pharmacists, medicines, places where medicines are being kept, physicians, pathology and pathologists, surgeons, surgeries, healing and healers, etc.

Uranus in Scorpio is a powerful placement. People under its influence have great willpower and desire to succeed.

They are very enduring and don’t give up on their goals easily. They are gifted healers and usually interested in the occult and secret knowledge.

These people often have psychic abilities and they use them for the benefit of others. This placement gives great psychologists with a deep understanding of people’s characters as well as their emotional being.

These people are often able to see through a person and feel what this person feels. This placement is also favorable for other professions where people are being helped by the use of special skills and abilities of the person with this Uranus’s placement.

In case of bad Uranus aspects to other planets, the person could be prone to accidents and sudden disastrous events which change their life completely.

These people could also be jealous, envious, and very possessive. They are very emotional and often go to extremes of emotional states; from deep depression and desperation to states of incredible happiness and excitement.

People with this Uranus placement are often magnetically attractive and have an almost hypnotic influence on other people. They are very passionate and often have weird taste in romantic partners.

In some cases, these individuals might be attracted to the dark side, cults, black magic, drugs, and similar matters. These people can be prone to obsessions of various kinds, and that involves obsessions with some people.

Their powerful personalities have a great influence on other people. People have a different reaction to these people; they both like them very much and admire them, or they are afraid of them and consider them overbearing.

Their energy is enormous and many people could easily feel overwhelmed by it. These people could be a powerful transformational force and leaders of that initiative for change. The transformation and changes, often take part in Scorpio ruled matters.

People with Uranus in Scorpio could be the ones discovering some centuries-old secrets and mysteries, writing books on secret knowledge and occult, teaching these subjects, etc. they are successful surgeons who help save people’s lives, or successful detectives who help people find satisfaction by discovering some secrets or helping solve a crime which has affected their lives.

People with this placement are often leaders of revolutions which change the world as we know it.

These people have a strong intuition which helps them get out of a difficult situation and avoid people who could be a harmful or negative influence on their lives. Their intuition and gut feeling often give them incredible insights which help them come with solutions to difficult issues in their lives, or help them make some beneficial discovery.

Their temperament is usually explosive, although they might not seem that way. These people are prone to outbursts of anger and aggression, especially with negative Uranus aspects to personal planets, often combined with Pluto aspects.

In the moments of extreme anger, these people cannot control their reactions which can be very brutal and sometimes with harsh consequences, injuring and even killing other people.

These people, especially with badly placed Uranus are often prone to accidents and severe injuries.

These people are very independent and cherish their freedom very much. They can become very defensive when they realize someone is trying to jeopardize it.

Uranus is a transpersonal planet, and spends around seven years transiting through one sign. That means that its transit through a certain sign influences global events, transformations and changes on a civilizational level, rather than on the individual.

Uranus’s influence on a specific individual should be determined by combining the sign, house placement, and the aspects of Uranus in that person’s chart.

We should also look at the current transits and progressions because they give us the timing of the events Uranus is bringing into our lives.

In Scorpio, Uranus is exalted and that makes a very good sign for this planet because it can exhibit its full potential in this sign.

People with this Uranus placement are strong personalities with powerful willpower. Their energy is enormous and they might appear intimidating to other people who don’t have as much energy as they do.