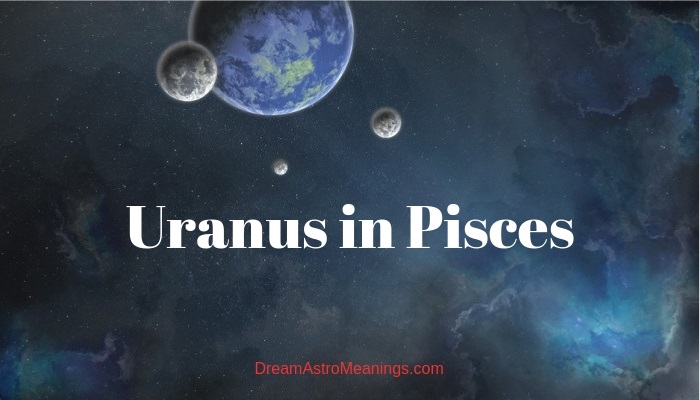 Uranus has the fourth largest mass of all planets and is the coldest one in the Solar system with a temperature of -224°C. this planet is made mostly of ice and rocks, unlike Jupiter and Saturn which are mostly composed of gas. Uranus has 27 moons.

Uranus is the planet which rules unpredictability and sudden awakening events in a person’s life. After Uranus strikes nothing is ever the same. Its influence is on the collective and influences individuals through its transits and progressions.

Uranus is the ruler of discoveries, inventions, innovations, geniuses and originality.

People who are influenced by Uranus are very intelligent and have the most unique ways of dealing with their problems as well as the problems of others. They usually have an unpredictable and eccentric nature, but they have very kind and helpful personalities. These people are true humanitarians, always ready to contribute to great world scale goals.

Uranus events are life-changing. They usually happen as a way of the Universe to introduce necessary and in some cases, inevitable change in our lives which we have been resisting to make or accept for a long time. The longer we resist the changes, the more severe the consequences we will experience.

This planet rules travel and travelers. It is also the planet of transportation and different means of transport. It rules especially aviation and flying, airplanes, pilots, air mechanics, airports etc. It is the ruler of cars, trains, buses, motorcycles, bicycles, and other vehicles, as well as the mechanics for these vehicles.

Uranus is the ruler of abrupt changes, unexpected and sudden events and circumstances we cannot control. These events usually bring unwanted, but necessary changes in our lives. These changes are usually something we have been avoiding doing or accept and now we don’t have a choice but accept it.

This planet is often responsible for the accidents we experience which in some cases have a deadly outcome. Its action is clearing the past to make space for new things to come.

The planet Uranus rules all kinds of rebellions against authorities. It rules revolutions, demonstrations, protests, boycotts, etc. It is the ruler of rebellious people, anarchists, assassins, heretics, reformers, fanatics, etc. this planet is the ruler of disobedience and impulsive behavior.

This planet also rules destruction by natural causes as well as caused by human influence, such as earthquakes, volcano eruptions, bomb attacks, etc. It is also the ruler of people in authority, bossy people, unpredictable and eccentric people, as well as tyrants.

This planet rules separation. Uranus is often the cause of break-ups and divorces due to infidelity or lack of freedom in a relationship. People with bad aspects of Uranus, especially with the planet Venus are prone to changing partners, multiple relationships and marriages, sudden break-ups, fidelity issues, etc.

Uranus rules astrology and astrologers, astronomy and astronomers, as well as the financial gains from these occupations. It is the ruler of magnetism, magnets, electricity, electronics, electrical engineers, engineers in general, mechanics, etc.

Uranus influences the development and transformation of our culture and civilization. It has to do with the progress and growth of society in general. Its transit through a sign, triggers whole generations born during this transit and Uranus takes seven years to cross one sign.

When determining the influence on a person, besides the sign, it’s important to take into consideration the placement of Uranus in the natal chart, as well as the aspects it is making with other planets in that chart. The most important times are when Uranus is triggered by transits or progressions.

Uranus influences generations of people and the society in general, through deep transformations it initiates. These transformations manifest as a mass change in perception and beliefs, style, innovations, discoveries, etc.

People don’t sense its influence unless it somehow triggers their natal chart through transits and/or progressions. When that happens, important life-changing events could occur in a person’s life. People with a prominent Uranus (have Uranus as their ruler, or in strong aspects to natal planets, etc.) in their chart are more sensitive to these occurrences.

Uranus in good aspects to other planets of the natal chart usually brings sudden favorable events into a person’s life which bring beneficial changes. If Uranus makes bad aspects to other natal planets, it could bring unpleasant and often disastrous life-changing events.

In the text, we talk about the traits of people born with Uranus in the sign of Pisces.

Men with Uranus in Pisces are sensitive and helpful.

They often have special healing gifts, and psychic abilities they use to help people in need. They can be very spiritual and possess a vast spiritual knowledge of different secret subjects.

They are in love with all kinds of secrets and can easily be a member of a secret society or even a creator of one.

Some of them can be prone to depression and negativity. They can have a habit of imagining the worst scenario in every situation and attracting it as a result.

One of their biggest challenges is to conquer their negativity and begin seeing the world and things around them through a different perspective.

These men love water and often have an occupation somehow related to water.

They can be successful sailors or fishermen. They could own some business somehow related to the sea.

Finally, it all depends on the Uranus’s placement in their natal chart.

Women with Uranus in Pisces are kind, gentle and sensitive beings.

Many of them are very intuitive and often possess developed spiritual gifts and healing abilities.

They are usually very religious and can be prone to become a member of a religious group or a secret society. They love water and love traveling to places with great water surfaces, like lakes, seas, or oceans.

These women are very helpful and don’t hesitate to offer their help to the ones in need.

They can be prone to escapism and negative thoughts, and dealing with their issues by ignoring them or succumbing to addictions, rather than confronting them.

Some of the good traits of people with Uranus in Pisces are:

Some of the bad traits of people with Uranus in Pisces are:

People born with Uranus in the sign of Pisces are generally secretive and interested in the hidden side of matters.

They are interested in occult knowledge and practices. They often have a strong intuition and developed psychic gifts.

These people usually rely on their inner voice to guide them through difficulties.

They could have an obsessive character and experience disappointments in their life. Also, they could be prone to negative thinking and always expecting the worst to happen.

With their attitude and belief system, they often attract the things they are afraid of which only nurtures the spiral of more bad events and fears these people feel.

They don’t seem to be able to relax and fear even when there is no obvious reason for that. These people need to learn to avert their negative thoughts when they appear and focus on the good things that await them instead of always fearing the worst.

Their strong intuition enables them to feel things before they actually materialize which can often be disturbing for the people around them and for these people as well. They are often gifted with psychic and healing abilities and use them to help people and make a living at the same time.

Transits of Uranus through the sign of Pisces often cause transformations and changes in people’s religious and moral beliefs. It might coincide with the discovery of some healing aid for the treatment of some incurable disease, etc.

They could also introduce new ways of healing, for example, using sound, distant healing, color healing, thought healing etc. This transit could also mark the rise of a great spiritual or religious leader.

The generations of people born under this transit of Uranus, could have a tendency to deal with their fears and problems by escaping into drugs, alcohol, and other kinds of addictions.

They are prone to escapism and hiding inside their imaginary world. They tend to be very sensitive and prone to absorbing the energy of others, both good and bad.

This placement gives these people a compassionate and selfless nature. They are willing to help anyone and share what they have with others.

Uranus in Pisces combines the destructive energy force of Uranus with the power of water ruled by the sign of Pisces. In this combination and with negative aspects, mass scale floods might occur during this transit.

Uranus is a so-called transpersonal planet. These planets influence generations of people and society in general. Their transit through one signs last for years, and people born during that period share these traits.

They don’t have a direct influence on individuals, but their influence is on the collective, through transformational changes and events, which change general beliefs, and attitude, and in that way, indirectly influencing individuals.

Uranus in a person’s natal chart influences a person mostly through the house placement and the aspects it is making with other planets.

When determining its influence on an individual, it is also important to take into consideration the progressions and transits at that moment, and determine whether Uranus is activated or not.

People who have Uranus in the sign of Pisces are usually very spiritual and interested in the secret side of existence.

They are very sensitive, and have a strongly developed intuition with which they could sense other people’s feelings and thoughts, and some even have the gift of foretelling the future.

Some of them have the gift of healing. Many of them use these gifts to help people and earn a living doing that.