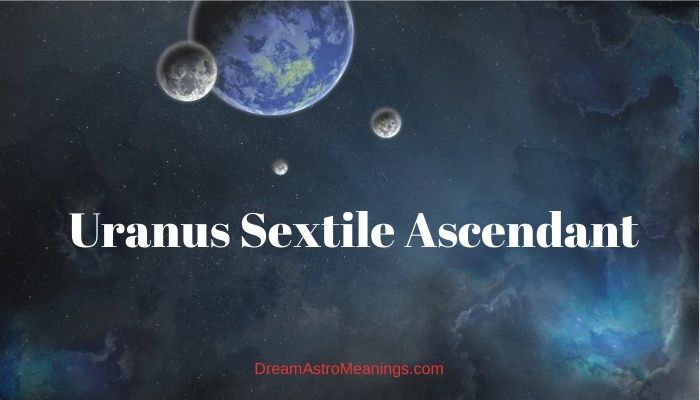 It is the seventh planet in the distance from the Sun. He sends down illumination (Logos) to reveal to people the divine plan. It gives a distinct sense of perspective and the ability to foresee the future in bright flashes of insight.

As the god of the sky, Uranus is the highest manifestation of the heavenly qualities.

Uranus is a great enlightener who sends visions and revelations, and clairvoyance is associated with this ability to “read” the future.

His insight is impartial, free from the dictates of morality, and it depends on you how to dispose of it.

This planet symbolizes the impulse for rebellion and liberation from constraining circumstances, for the establishment of a new order, reflecting a progressive type of thinking.

The planet symbolizes the desire to break free from the limitations and conventions of everyday life.

From an astrological point of view, it is the driving force that prompts a person to protest against the established order of things, strive for independence and play by their own rules.

Uranus breaks the rings of Saturn’s limitations and prompts them to gain freedom. To achieve inner freedom, you will have to break with the past, family traditions and give up stability.

If Saturn is closer to you, then Uranus may seem like a rebel, pushing to reassess your life, renewal, destruction of everything that has become obsolete, both in society and in an individual, and freeing up space for a new one.

While Uranus claims radical change is necessary, it is rarely welcomed because it turns everything upside down.

This planet claims that it is necessary to give up the desire for financial success and stability, since attachment to material things does not allow you to become truly free and feel the taste for life.

The Urania principle gives you a chance to know yourself deeper and realize you’re potential, free yourself from prejudices.

Uranus is called the “highest octave” of Mercury because it moves the intellect one step further, into the realm of pure reason and gives it the ability to invent new things.

Progress is impossible without it, but the need for change can be painful for a person.

The position of the planet in the natal chart shows the degree of your desire for change.

It can also point out areas in your life where you need to adapt to change and tell you how to approach this process.

Uranus testifies to the desire for innovation, originality, freedom of spirit and willpower.

The astrological symbol of Uranus is associated with the configuration of the first television antennas, a symbol of invisible power, a channel of modern magic.

It symbolizes the power of the human mind, which is able to reach the field of “universal ideas” and find them practical application in everyday life.

This is not the realm of the rational mind, for which Mercury is responsible, but intuitive knowledge that can combine concepts in a dazzling flash of insight. Uranus is responsible for the truth. The expression “Truth liberates” could become his life credo.

Uranus is at the forefront of social and technological progress, among rebels and revolutionaries, whose ideas, reforms, discoveries and innovations have shaken humanity since its inception.

People under his influence love to shock others and behave defiantly. They are rebels, heralds of a generation striving for change and freedom.

They do not recognize authorities and everything that is associated with tradition and oppression, do not walk the beaten path, try to free themselves from everything that connects with the past and somehow limits. They are against gradual change and incremental development.

Esoteric astrology has at its center the Soul, that is, the purpose we live through incarnation. He places great emphasis on one’s Subsign or Ascendant.

Traditionally, the sign in which our Ascendant is located shows our physical characteristics, the social mask we wear, and the way we project ourselves to the outside world.

In other words, the Ascendant is not only our role and the mask we wear in front of the world, but the purpose of our Soul peeks behind that mask.

The personality we have is a vehicle for the Soul’s plan, and the sign in which our Ascendant is located shows what that plan is.

According to Esoteric Astrology, the Sun represents the present, the Moon the past and the Ascendant the future, that is, the Path of the Soul.

The Sun sign in the natal chart will give us conscious goals that we will want to achieve to shine (see more about the Sun sign here), the Moon sign will show us unconscious needs for security, connection and dependence on the past (see more about the Moon sign here), and the Ascendant will give us life events and an environment in which we will have (un) opportunities to reconcile and achieve both the Sun’s goals and the Moon’s needs.

Through developing higher qualities of the sign of our Ascendant, inside and outside (in the world), we gradually strengthen our Sun and Moon and discover that we can work together using the Ascendant as a link.

For example, take a person who has the Sun in the sign of Libra and the Moon in the sign of Aries. The conscious and unconscious needs of that person will be the opposite. Consciously, the Sun in Libra wants equal relationships and puts partnership above its individuality.

Shines when in partnership. It’s not that such a person doesn’t want to be alone, but a partnership is simply preferable. On the other hand, there is an unconscious emotional need of the Moon in Aries to individualize itself through independent, self-contained action.

Partnership generally hinders his sense of freedom and seeks challenges that he can tackle on his own, away from others. These two opposing aspirations can be reconciled through the sign of the Ascendant.

Take for example that in this case the Ascendant is in the sign of Gemini. This person will reconcile their inner conflict between “I” (Moon in Aries) and “we” (Sun in Libra) through Gemini themes: lots of conversation and mental ideas on how to reconcile the need to be with a partner but also to have time for yourself.

Also, through the Ascendant Gemini a person can find a partner who shares the same communication skills and intellectual interests and with such a partner the Sun in Libra will find partner harmony and fulfillment, and the Moon in Aries will be able to communicate in Gemini its needs to be independent and to itself in the first place.

A planet in a relationship with an ascending sign that most strongly influences the style of behavior in society and success in a career, from birth to old age is reflected in the appearance and ways of interacting with people.

Given that sextile is the most favorable aspect, the native will receive the brightest and most advantageous sides of both sides of the aspect, but when the ambiguous and unpredictable Uranus is involved in tandem, you can never be sure of the 100% positive influence of the king of impulsiveness and daring creativity.

The native seeks adventure and always chooses opposition to the mainstream in both politics and art. The secret dream is to lead a new wave that sweeps away old attitudes and beliefs.

At the same time, there is no aggression in him and he is not interested in the destruction of dissidents. It is simply important for him to dominate and receive an enthusiastic recognition of his uniqueness.

However, there will be plenty of enemies and threats along this path. Influence of the sextile Uranus – Ascendant on fate Since childhood, the owners of the aspect stand out from the crowd for their non-standard behavior, bright and sometimes odious choice of clothes, and complete disregard for authorities.

True, thanks to sextile, it arouses the sympathy of others and attracts people who are able to respect the courage of choosing to be different from everyone else, to support and redirect creative searches to favorable conditions: theater, fashion, and art and music studio, dancing.

It is important for the native to listen to intuition, and not calls to settle down, forgetting about the true vocation, then success will come despite the stereotypical ideas of society.

Originality and innovation are the two main keys to prosperity and happiness, especially if the Sun is in Aquarius, Libra, Gemini, Leo and Sagittarius.

But even if the daylight and Mars are in the signs of the earth, a person will never be boring and shy, he simply monetizes his exotic style and way of life.

Otherwise, skillful and patient communication to the impatient Aries is not a strong point, so the Gemini subsign will give the necessary balance.