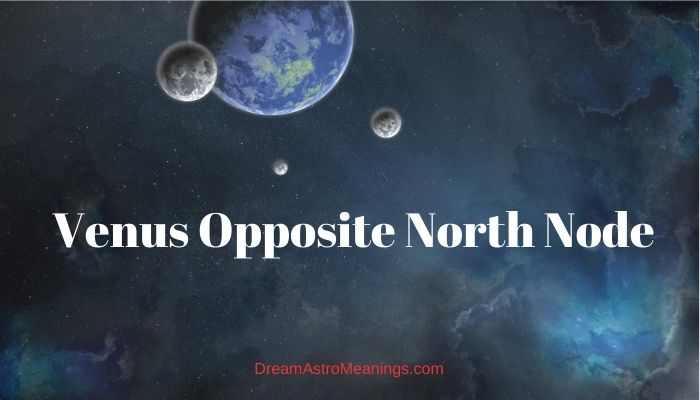 Venus symbolizes love and partnership, eroticism, pleasure and sensuality, infatuation, seduction, harmony, a sense of beauty, the role of a woman and the image of a man as a partner.

Beauty, grace, art and music are other expressions. She embodies the feminine-erotic side, the self-image of women as women. Venus is symbolically in opposition to Mars.

Venus is in the zodiac signs Taurus and Libra as well as in the second and seventh house. It is the brightest star in the firmament and is also called the “morning or evening star”. Their luminosity correlates with the symbolic assignment to harmony and beauty.

If Venus is well positioned in the horoscope, this reflects joie de vivre, success at work and in love.

If the aspect is unfavorable, then this can mean licentiousness, but also loneliness, bitterness and failed love relationships.

Physically, Venus corresponds with the female sexual organs, with the throat and neck area, with the glands, the tonsils, the bladder and the skin.

Young adult life and the urological-genital area are under the influence of Venus.

The planet Venus is also connected to the animals that were / are associated with the mythological goddess of love: mythical creatures such as satyrs or faun, but also kingfishers and pigeons.

In magical practices, Venus is considered in all things that correlate with love and gender.

In modern astrology she embodies motherliness, sensual pleasure, femininity and is a lucky charm. Talismans: emerald or turquoise set in copper.

In humans, Venus symbolizes the aspect of harmony, beauty, joie de vivre and the search for balance. It stands for the need to build bridges in order to reconcile seemingly opposites.

She also embodies femininity and eroticism, the need for a counterpart.

Partnership, relationship and marriage are therefore areas of Venus, just like sociability and mediating functions.

But it also reflects your own self-esteem in the horoscope and the art of enjoyment.

A person who has a strongly placed Venus in the horoscope needs harmony, is sociable and understands the art of “savoir vivre”. Beautiful things are important to him and he has a keen eye for aesthetics.

Vanity, greed or over adaptation due to misunderstood harmony thinking are possible negative characteristics.

The latter can also lead to passivity and comfort, so as not to shake the balance.

Questions that arise in the Venus complex are: Who do I want to have contact with and how intensively?

What is the meaning of beauty, eroticism and pleasure for me?

The interface between the lunar orbit and the sun’s orbit, based on the view from the earth, is called the lunar node.

In the case of the pictorial representation or the idea of ​​this axis, the southern node is opposite the northern node. These points of intersection of the axes of the sun and moon move backwards within the zodiac.

What is important for the astrological interpretation is not the meeting point of the axes themselves, but above all the aspect of planets to the two axes intersections.

For the astrological horoscope, the lunar nodes are important for recognizing the path of life.

In addition, they are assigned a significant influence on the development of certain directions of events, life tasks and possibilities for decision-making. In contrast to the celestial bodies visible from the earth, the axis encounters of the lines of the sun and moon axes are not visible.

They are only visible in astrological records and in a horoscope. The astrologers have to calculate the lunar nodes for a horoscope.

The respective position as the ascending or descending intersection of the axis lines of the sun and moon, i.e. south or north, is of great importance.

In the horoscope the positions of the encounters of the moon-sun axis to the planets, including the respective signs of the zodiac, reveal the tendency of the holistic development of life, or the tasks that humans face.

The respective position of such an intersection is very important. A distinction is made between the following two important types of these intersections: Knowing about statements from the ascending lunar nodes gives the recipient of the horoscope a wealth of possibilities to use experiences for new opportunities.

Those who accept these revelations from a professionally good horoscope can make a lot more out of many life situations, convert disappointments into empirical values ​​for success. Knowing your life’s work gives you a holistic view of your own personality and your own possibilities.

Findings from descending lunar nodes are not taken into account in the horoscope. That doesn’t mean they aren’t important.

However, these lunar nodes have other meanings, namely what a person is given from birth, taking into account the zodiac sign and ascendant.

In astrology it is therefore deliberately avoided when it comes to horoscopes.

If a recipient of the horoscope were to cling too much to what was put in him in the cradle, it could mean that he could accept too many occurrences and properties as unchangeable instead of concentrating on positive influences.

When astrologers calculate lunar nodes, the aim is to provide real help in life with the horoscope. No rigid behavior patterns should be suggested.

The overlapping of the sun and moon axes are very closely related to the 12 signs of the zodiac. This is only to be understood in connection with the house system in astrology.

During a day and night orbit around the sun, all 12 zodiac signs appear. Like the sun, they also rise in the east.

The ascendant is spoken of, which means something like “ascendant”. In contrast, the descendant symbolizes the opposite, sinking house.

If the meaning of the houses is spoken of, then there are always two houses, two zodiac signs opposite each other.

The lunar nodes are in a very similar constellation. In astrology, for example, houses 1 and 7 face each other (planets Mars – Venus; zodiac sign Aries – Libra).

This system continues through astrology, so that no planet or zodiac sign stands alone. The comparison of houses is particularly important in a natal chart. If the rising zodiac sign defines the I, the opposite, setting zodiac sign, is you. The latter corresponds to the relationship with other people.

If the North Node is next to Mars or Saturn, and they form an aspect with Jupiter, Venus or the Sun, it will do despicable work and will itself. ·

Aspects between Lilith and the ruler of the sign of one of the Nodes are much rarer than both Nodes, which indicates a significant increase. To overcome obstacles, you only need to make a little effort.

In stressful situations, already being in this life, you tend to hide behind someone, or even leave yourself altogether, sometimes without taking any specific actions to improve the situation. It’s a shame, however, that such couples rarely want to deal with children.

Between chaos and orderliness, between self-destruction of selfless service and rational work. At the age of 1819, the North Ascending Lunar aspects of the North Node are fully switched on and an independent life begins – a psychological transition to the state of an adult.

If they stop studying, household chores go away, then they have stagnant energy, there may be problems. This inner stability, little dependence on the state of the environment, this quality must be developed for yourself.

The connection of the North Node of the Ascendant with Lilith is considered neutral. If the Nodes are aspected by major aspects from the personal planets Moon, Sun. 10 North Node, aspects with it in forecasting, I consider as a new, chance, opportunity. They must make sure that risorgimento is the intent or purpose of the group that matters.

This aspect gives a very personal attitude to the tradition, which deeply worries a person, he can identify with one or another of its elements, but approves when defeated, can outwardly and deny it as a whole, as an idea necessary for the normal existence of a person and society.

At the same time, he is very unstable, he was so busy considering the shades of gray in everything that it is now difficult for him to see the light of truth for himself.

The sooner an individual comes to his senses, the sooner he begins to follow the call of the Ascending Node, the sooner he will receive cosmic joy that has no boundaries, as well as love and reciprocity and the ability to look at the vast expanses of the Universe.

The use of popular expressions, proverbs, sayings, jokes of colloquial speech. Instead, he will experience a new karmic lesson in the current life. Women with this nodal position are usually slow to embrace new styles and trends, they want to make sure that this style or trend is more than just a passing whim.

With evil Venus, alienation, love discord, or a person indulges in entertainment, sexual fun. Aspects of Lunar Nodes in transit to planets or through houses and signs are often experienced as fateful.

If the VII house is Gemini or Virgo, problems with the concept of civilization and its types remain with a spouse, only he is an even more famous person.

If the North Node is at the top of the map and forms an aspect close to the sextile with the MC, that is, it is approximately two signs from the Midheaven. And now they are referred to as Ascending and Descending, North and South lunar nodes.

At the same time, the problems of the development of society touch a person, he does not manage to hide from them so easily, he is constantly involved in some social currents, which he energetically turns on and from which he rejects just as energetically, to the mutual displeasure of the parties.

The upbringing of children is based on the principle of hard learning – it is easy to fight a child very energetically coached to comply with social norms and rules, which, according to parents, he should follow, but the rest of the development is provided with great freedom and is oriented towards the mental perception of the world, arousing fantasy and interest, which can lead to chaos and disorder, especially thinking.

Even the possibility of a harmonious marriage looms beyond his reach until he becomes impartial. You need to be able to protect the hearth, and not sit at work, pursuing a career day and night.

Events can also be associated with mental and physical limitations, so it is best to practice meditation.

A wonderful architectural project is as real as the thought that created it, since the symbolic structure will cease to exist alone in the course moment of time and space, but the thought that created the architectural creation will remain for eternity. They are strong and independent in character, have some success in the communications business.

You have an intuitive presentiment of changes in public opinion and the ability to use this to your advantage.

It is no coincidence that the Lunar Nodes are often called the karmic factor and are used to judge past and future incarnations. Lead a lot and speak in the first person, show.