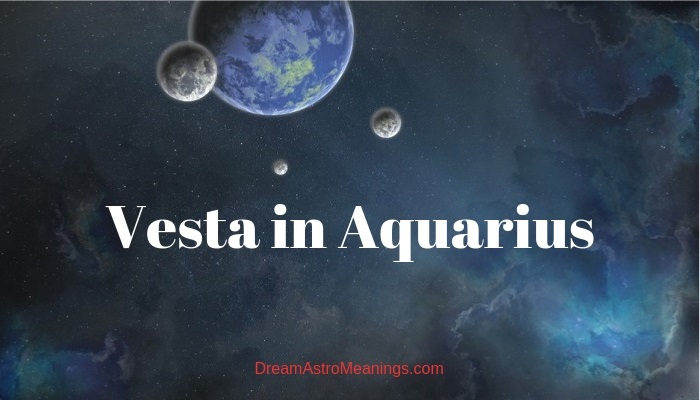 The asteroid Vesta is the fourth asteroid, discovered after Ceres, Pallas and Juno. Vesta was discovered in March 1807 and is the second heaviest asteroid after the asteroid Ceres as the heaviest.

Vesta has two enormous craters on its surface and they were considered the product of grand collisions which happened billions of years ago. Parts of debris from these collisions were scattered all over the Earth as meteorites.

This asteroid is the brightest one that can be seen from Earth.

Vesta got its name from the ancient Roman goddess of family, the heart and home. She was also the guardian of the Roman people. She was represented with the fire burning endlessly in her temple placed in the Roman forum.

They were young girls aged six to ten years. Their consent was required to remain virgins for at least 30 years, after which time they were released from the priesthood.

The Vestal virgins were obliged to take care of the sacred fire in Vesta’s temple. That fire was supposed to burn without ever being extinguished due to a belief that the fire was the protector of Rome.

Those Vestals who mistakenly allowed the fire to be extinguished were beaten or suffered more severe punishment.

Vesta was considered the cleanest of all deities. She was a virgin, but also the grantor of fertility to women who weren’t able to have children. She symbolized the vital force of the Roman society as well as all the rituals the Vestals performed to ensure good harvest and fertility.

It also rules different psychological conditions and issues because of refraining from physical or personal relationships. It also indicates the issues we have for abstaining from intimacy and our fear of intimacy.

Placed in a certain sign in our natal chart, Vesta describes the areas we need to focus on, as well as the things we should remove from our lives. This asteroid also indicates how we choose to deal with our passion and our physical needs.

It indicates whether we are suppressing them or we choose to exhibit them freely. Vesta placed in a certain house of the natal chart indicates the areas of our life where we should devote ourselves, as well as the areas in which we feel restricted.

The asteroid Vesta indicates how much we are devoted to something or someone, a project, a cause, a belief, a person, etc. Vesta also indicates the areas where we experience some issues which we decide not to acknowledge, or we don’t like to share them with others.

They are usually the areas which we consider very important, but we cannot seem to find satisfaction in relations with them.

Vesta gives us the persistence to maintain our focus on achieving our goals as well as to overcome the problems we encounter along the way.

Men with Vesta in Aquarius are often focused on accomplishing some common goal, which will improve humanity.

These men are fighters for freedom and rights of repressed people and people who have been deprived of their rights for some reason.

These men love their freedom very much and they often choose partners who don’t mind having an open relationship.

These men don’t allow their freedom and independence to be jeopardized and are usually not faithful.

Women with Vesta in Aquarius are open minded and easy going. Their nature is tolerant and they are not the least bit possessive.

They also don’t like possessive people, especially potential mates. They have a casual outlook on relationships as well.

These women are concerned for the wellbeing of humanity in general and often fight for some common cause. They are not very emotional.

People with Vesta in Aquarius work best if they have some social, humanitarian, or political goal they strive to achieve.

Their personal freedom is of utmost importance for these people as well as freedom of humanity in general.

They are not very emotional, but rather impersonal, which often leads them to problems in relationships with their loved ones.

People with Vesta in Aquarius often have a tendency to rebel against authorities. Their need for intimacy can have a dose of awkwardness.

These people often have unusual relationships. It is common for them to turn a friendship into a relationship.

They are not possessive towards their partners and are not faithful either. They desire partners who have the same relaxed approach towards relationships.

They are often focused on bringing equality to people. They desire to inspire the masses to focus on some new goals or experiences. They propagate the freedom of self-expression.

People with Vesta in Aquarius are rather focused on humanity than on their personal relationships.

These people are not very emotional and that causes them relationship issues and problems with their loved ones.

They have an open attitude towards relationships; they don’t like their freedom to be jeopardized and are not faithful.