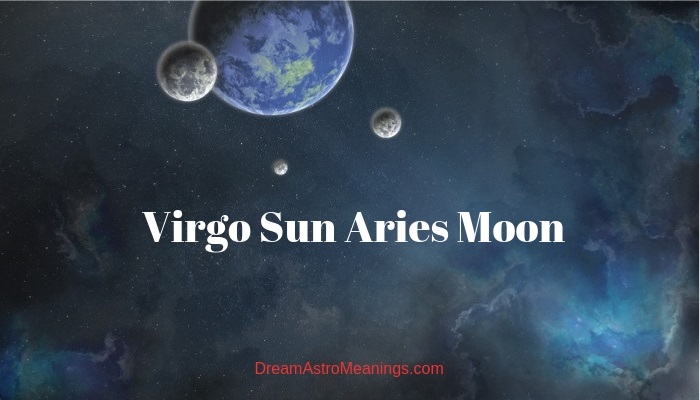 Our sun sign describes the part of our personality we openly share with the rest of the world.

On the other hand, our moon sign describes our inner being and parts of our personality which are known only to us and the people we consider very close.

People with a combination of sin in Virgo and moon in Aries are very dynamic and precise.

This combination of sun and moon give this person earth and fire energy, which makes them precise and thoughtful and yet ambitious and confident enough to take action and pursue their goals.

These people love organizing and planning things. They usually desire to know things in advance so they would prepare themselves. They can get angry if things change at the last moment.

This combination of sun and moon gives the Virgo person a dose of bravery and initiative which they often lack; they remain organized and detailed, but they use these traits to ensure the success of their swift actions.

These people are good at recognizing the right opportunities and act fast to seize them.

They could be overly judgmental and criticizing people for when they consider their attitude is not accordant to their standards. They could be considered overbearing and boring by many people because of these traits.

They give themselves the right to openly criticize others without allowing others to criticize them. They often consider themselves perfect, and especially with this moon placement they could have a very strong ego which makes them think highly of themselves.

These people can be prone to giving unwanted advice and telling others how to do certain things. They tend to do it especially with the people who are close to them; like family members and friends.

Most people usually don’t like to be told what to do, and they could experience many conflicts and arguments because of these traits.

They are often unaware of their behavior or they don’t consider it bad, and that is why they are often offended when they receive a negative reaction or comment from people they are trying to instruct how to behave or act in certain situation.

They don’t have a bad intention and they only desire to help, but they don’t understand that their actions can be very bothersome to people.

They are excellent for creating and maintaining order and organization, both in professional and private lives. They often choose a profession where they can use these traits which are a part of their nature.

They are also very tidy and enjoy cleaning their house and making an order. They can be very strict when it comes to maintaining hygiene in the spaces where they live or work.

That is why they can react aggressively and attack everyone who doesn’t respect their efforts on maintaining tidiness and hygiene and not doing their part.

These people can often use harsh words to express their feelings which can provoke conflicts even when they are right about some circumstances. They need to work on their self-control issues and trying to use adequate words and mild tone to say what they desire.

With them it is usually not what they say, but how they say it which provokes people and causes them to return the attack and create conflict.

In general, these people are very warm-hearted and helpful. They even offer their help without being asked.

Their nature seeks to establish order and that is why they are provoked by any disorder in their vicinity even if it has nothing to do with them. Their need to make things right often causes them to behave pushy and bothering people.

They are good with money and they are well organized with spending. They successfully control their urges to overspend because they know that they have more important goals than temporary satisfaction with the buy.

These people want to create a stable financial base for their future as well as to provide a roof over their heads for themselves, if they don’t have it already.

They are very self-sustainable and resourceful and they usually manage to provide everything they need all by themselves.

Their analytic mind is always at work. They collect data from their surroundings and make wonderfully precise conclusions about different matters.

The good traits of Sun in Virgo and Moon in Aries:

The good traits of Sun in Virgo and Moon in Aries:

Virgo people are very independent and self-sufficient. When Aries influence is added, that often makes a person reluctant to commit.

These people love their independence and freedom very much. They are also perfectly capable of taking care of themselves (both men and women) and they are usually not very sociable.

Of course, we don’t mean to say that these people don’t have relationships; naturally they do, but when it comes to agreeing to some terms and conditions which will jeopardize the life they have created for themselves, they often tend to retreat and take some time off to think.

Their answer is often negative because they realize that they will need to give up much of their freedom because of that relationship or marriage.

These people are not very emotional (unless they have a prominent water element influence).

Their approach to things and relationships is rational and intellectual.

They enter relationships fully aware of their actions. They are attracted to people who are intelligent and communicative.

Their ruler, Mercury, gives them a talent for great expression and a love for communication, and they cannot be in a relationship or marriage with someone they don’t have good communication with.

These people are not promiscuous (although some are), but their reluctance to commit and form a serious relationship or get married causes them to have a fair share of partners.

Aries moon makes them passionate and that is another reason why they tend to change partners often because the partners usually leave when they realize that the relationship isn’t going anywhere.

Some of these people are prone to have periods of celibacy and not dating anyone. They could also have different phobias and behave strangely when it comes to relationships and dating.

In a marriage or a long-term relationship, these people are usually devoted and loyal because they took a lot of time and analyzing before making such a decision (although there are some, who continue pursuing their previous habits).

They are very responsible in regards to the relationship duties and they make sure they are all finished in time.

Having in mind their need for tidiness and spotless cleanliness it is safe to say that they will be the ones who are in charge of these duties around their family household.

They can be prone to criticizing and judging their partner’s behavior which often gets on their partner’s nerves. Their inability to say things that bother them in a way which doesn’t provoke a conflict, costs them a lot.

They need to find a way to speak to their partners about the things they don’t like and try to make a compromise with them.

Aggression, attacking and rude words will only make things worse and no one wants that.

These people often have a habit of sulking and not talking with their partners or spouses when they dislike something or when something bothers them.

That kind of behavior could also be considered provocative and causing conflicts with their partner who doesn’t know the reason for their behavior.

These people can be overbearing and over-demanding parents.

In general, they are caring parents, but often lack the emotional approach towards their children. Instead, they are strict and give the rules the children need to follow. They try to provide everything they need (and want) to their children.

Although they might not be the most sensitive parents, their children are grateful them for that approach when they get older.

The best match for a Virgo sun and Aries moon could be another earth sign, possibly with a bit of fire or air element.

These people need a partner who is stable and reliable and they want someone to be involved in maintaining their relationship or marriage as much as they are.

People with sun in Virgo and moon in Aries are very organized, stable, down to earth people.

They can be prone to outbursts of anger and unpredictable reactions when they are provoked by something.

Their nature is focused on creating order in every segment of their lives (and other people’s lives if they allow them). That trait causes these people to put their noses into other people’s business uninvited. They often offer advice without being asked to.

These people are also prone to criticizing others if they don’t match their standards.

Their standards are usually their creation and that often makes people irritated and starts a conflict between them.

They can also be very judgmental of other people’s behavior. They, on the other hand, don’t tolerate when someone judges or criticizes them and find themselves insulted because of that.

They can be prone to directness and harsh remarks towards others, not paying attention if they could hurt someone’s feelings. They strongly believe that they are doing people favors but the way they do it doesn’t do god to anyone.

They are reluctant to enter a serious commitment or marriage because they love their freedom.

Because they are very passionate and have strong physical needs, many of them are prone to changing partners because they don’t stay with one partner for a long time.

They are usually good marriage partners and dedicated parents who are often very rigid towards their children for their own good.