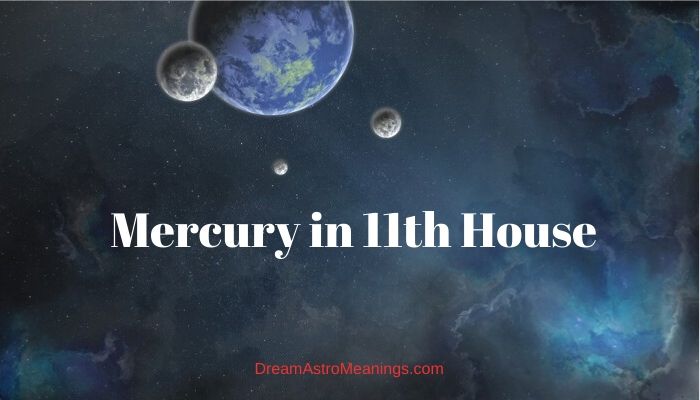 Natal chart is like your astrological identification card. Unique as a fingerprint, it holds all secrets of your destiny within. Natal charts are a precious treasury of information about our lives. Do not mistake them for straightforward predictions, because they are not so simple.

Natal charts reveal your potentials and could help you in using them to the maximum.

Charts are divided into twelve filed, which are called houses. Astrological houses represent field of life and planets inside them affect our experience within specific domains of life. Knowing your houses could be very useful.

The Eleventh House follows the tenth field of success and career and it is also associated with gain, fortune and accomplishments a wider sense.

In general, the Eleventh House is considered a benevolent and a pleasing field. It is about prosperity, progress, realization of our desires and life goals. Each planet that takes place in this house tells something about our source of income and financial status.

In addition, this field is associated with partnership, collaboration, alliances, societies, companies and so on.

This is the house of connections and friendships; this is also the field about all kinds of contacts with people of non-emotional nature, although we could hardly call any connection deprived of all feelings, of course. In any case, this is a field related to social activities and involvement with the society.

This house represents our environment and our place within it. This is the field that tells about interests and social circles that you belong to. It relates mostly about those that have something to do with your career.

The Eleventh House is especially related to your older brothers and sisters and your connection with them. It tells about friends and friendships, as well as about love you receive from others.

This filed is analog with the nature of Uranus. As such, it requires one’s openness towards unexpected and sudden life changes or situations. This is the house of the greatest freedom and of good fortune.

Being open towards the world and especially being emotionally generous means you could receive love from others. This is the field about the fulfillment of your hopes and honest desires.

The Eleventh House is a pleasant field. The position of the ruler of the Eleventh House tells about the specific area of life in which one could achieve the greatest success and express all the potential.

The Eleventh House is also related to humanitarian engagement, selflessness, charity and participating in all kinds of organizations and activities that are altruistic and philanthropic in nature.

Mercury is Sun’s closest companion and the smallest planetary member of the Solar system. In astrology, Mercury represents our pure rational mind, logic and communication.

As such, it helps the Sun stay in touch with reality. The Sun is our Ego and it needs its dose of raw rational info and pure logic, in order to function properly.

This little fellow is a perplexing one, considering that it is neither a masculine nor a feminine planet, neither a daily nor a nightly one. Most importantly, Mercury is neither a malefic nor a benefic.

Instead, this planet easily absorbs the vibes of planets it forms aspects with and it imitates their energy. Mercury is changeable, flexible and adaptable, which makes people who are ruled by this planet very flexible, ready to make some compromises and tolerant.

These people could find themselves comfortable in various situations, without any complaint.

In mythologies of the Ancient Greece and Rome, Hermes or Mercury was a god of merchandise, travelers, youth and he was the messenger of gods. Hermes was considered a trickster god and a patron of sharp-minded criminals and thieves.

Both deities were most commonly depicted as a youthful male in motion, although there are some portrayals having him an older male.

In any case, this deity and the planet are both characterized by the youthful quality. Mercury is a restless and adventurous and an enthusiastic one.

People dominated by this planet are very communicative and intellectual. When we say communicative, this does not necessarily mean that all of them were extremely talkative.

Here, communication should be taken in the widest sense possible. A skill of the written word, a performing skill, rhetorical skill, mimics and non-verbal communication are all associated with Mercury.

Now, if Mercury were in a favorable aspect, these people would present with amazing communication skills!

If Mercury was in not so pleasing aspects, people might have trouble communication their messages, expressing their thoughts and there could be many arguments and misunderstandings. It depends on the individual natal chart and all of its aspects and elements.

In general, people with a strong positioned Mercury are eager to learn new things; their thirst for knowledge is insatiable. They are informed about everything.

Open to the World

They enjoy exploring the world and learning about people. In addition, they have an amazing power of perception and a quick, efficient, practical mind.

They are guided by their common sense and logic, yet open to all kinds of information. They enjoy traveling and often dream about moving abroad for a time. Place does not hold them still.

Education is of great importance to them. They could be both theorists and participant observers, to borrow a term from anthropology.

Mercury dominated individuals are methodical, systematical, detail oriented and very analytical. It appears that their brains are an unstoppable mechanism.

Although it might seem exhausting to other people, it is, in fact, very relaxing to them. They feel nervous and lost if they have nothing to occupy their mind with.

Fortunately, this is a wide world, full of novelty and Mercury people are eager to discover it all. They are very optimistic and positive people.

Many of them are also interested in art, astrology, parapsychology and some other alternative paths. Their communication skills and their eagerness to learn something new could lead them to spirituality, as well.

They try to establish communication with higher spheres, although it might appear contrary to their rationalism, it is not. They could, in fact, become very religious.

They could combine their sharp intellect with other things, trying to rationalize things, discover patterns and else. These people are usually well organized and neat. They move a lot and are not easy to catch.

When it comes to romance, Mercury people are not amongst the most compassionate ones, since they know so many people and they are always eager to meet new ones. It leaves them with a worldwide circle of friends.

Close connections and intimate relationships are rare, though. When it comes to romantic partners, they need someone who would stimulate them mentally, in the first place.

In addition, Mercury could manifest in a fairly negative way, if it was positioned badly in a natal chart. People with such aspects could become manipulators, fraudsters, liars, deceptive ones, thieves and pretenders.

Some of them could seriously affect others’ lives by their fabricated stories and notorious lies. Others might not become destructive for others, but could suffer from insecurity and great anxiety when it comes to communication.

Good aspects, of course, present with the best qualities of this youthful and communicative fellow.

Mercury in the Eleventh House – Mercury in 11th house

Mercury in the eleventh field indicates a very sociable, communicative and extroverted native.

People with Mercury in the Eleventh House usually have no troubles in making new connections, acquaintances and friends. They have a wide circle of friends and it makes the person feel good and happy.

The exchange and communication are of a great importance to this person. This native enjoys lively conversations and large gatherings.

This is a very rational personality, practical and open to new ideas. He or she may consider ideas and opinions placed by others, but this native is also very inventive and creative.

These people often come up with brilliant, ingenious ideas that bring prosperity and progress. They would always consider what others have to say, but they will decide with their own head. They are highly motivated, oriented towards progress and success.

Being highly intelligent and quick-minded people, these individuals use knowledge to get what they want. They are very Uranus type of people; these natives are always a step ahead their time, ingenious, inventive and innovative.

Thanks to great communication skills, provided by Mercury, they could influence others, as well. These people think big and they want to contribute to the society, with their amazing ideas.

Aspirations that bring them fulfillment in a psychological sense are always directed towards being socially useful; these people are very humanitarian.

They also need mental engagement and they would love to work with people of similar ideals and aspirations.

In other words, they are guided by a higher cause, they are on a mission and it brings them great satisfaction. They feel at their best when in an environment of like-minded people.

Being in such an environment, they could express their ideals and higher goals and exchange valuable and practical ideas on how to bring plans into realization. They are very tolerant, full of understanding, ready to accept others’ opinions and without prejudices.

These people treat others with respect. Mercury in the Eleventh House people are always open for an honest, straightforward and assertive conversation in which everybody could state their opinion.

These people are reasonable, rational and guided by common sense. They know how to act here and know and would often offer useful practical advices to others. These people are reliable, which is something different from Mercury’s typical nature.

These are trustworthy, serious and responsible people. If you have them as friends, be sure they will be there when needed. Although they know many people, they know who their closest friends are and would never leave them.

People with Mercury in the Eleventh House are very humane and altruistic.

They are compassionate and eager to understand different people. They like travelling, since it enriches their inner encyclopedia and gives them a better insight into how this world and the people work.

An interesting thing is that they commonly fall in love with someone abroad and start a romantic relationship all of a sudden. This position of Mercury has much to do with foreign countries.

For example, it indicates an opportunity of studying abroad, although this depends on other factors in a native’s birth chart. If it happens that the native eventually moves abroad for study or for work, he or she easily adapts to the new environment and the culture.

These people easily get along with others, which also opens an opportunity of staying in another country for a longer period or even for good.

Mercury in the Eleventh House – Synastry

Mercury feels amazing in the eleventh field, so this is a position that brings understanding, mutual activities and especially those of humanitarian sort.

This synastry overlay is more friendly and humanitarian than romantic, but it is positive in any case.

Friendship is actually a base for a solid, warm and stable relationship, in addition to other factors, of course. If your partner was your best friend, you should really appreciate that fact.

Mercury in the 11th House –Transit

Mercury in the Eleventh House in transit is associated with group activities, activities and plans involving many people or friends and generally plans related to work.

This is a good period for organizing such activities and making new friends and new connections, since it would possibly contribute to your overall growth and progress. Do not break relations, because you do not know when you will need it.

However, be careful not to be superficial and shallow when it comes to relationships.