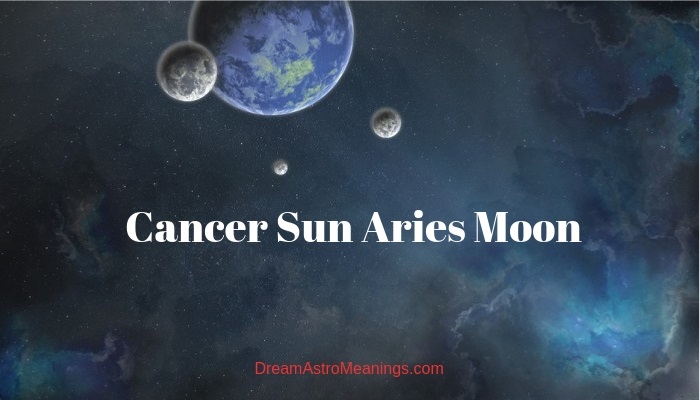 The Sun and the Moon in our natal chart represent our rational side of personality and our inner being. While the Sun’s traits are most obvious to the people around us, the traits of our Moon are only known to us and the people who are close to us.

People with Sun in Cancer and Moon in Aries can appear very reserved and timid on the outside, but they often have an aggressive, sensitive, and overly emotional nature. These people can appear insecure, and often are insecure, hiding their insecurity with occasional outbursts of anger and rage.

This Sun/Moon placement is a combination of water and fire. These two elements don’t combine very well, and they tend to go against each other’s beneficial qualities. These people are very emotional and not very sociable.

In their inner circle of people, they know well they are usually open and can demonstrate their true nature. With people they don’t know well, these people are usually reserved and distanced.

They usually have a hard time relaxing in the presence of strangers. It takes a while for people to realize their true nature, but in some situations, they tend to lose some opportunities for advancement because they don’t react fast enough although inside, they are certain that they would be excellent for that job or career chance.

They often feel mad about themselves because they don’t have enough courage to go after the things they desire.

These people often find themselves in situations where they lament not doing something because of their fear and insecurities.

They tend to demonstrate their anger and disappointment in the presence of their close family or friends circle, when they bother them, talking about regrets and the mistakes they have made.

They have a lot of abilities and are very capable, but they don’t have a chance to use their full potential because their fears and feelings of inadequacy are blocking them.

They often have creative talents and they love sports. They could have periods of intense training and sports activities followed by periods of overeating and not doing anything else but gaining weight.

These people often struggle with their eating habits and tendency to eat much. They are often on some diet regimes trying to lose weight or at least control the amount of food they eat.

These people often suffer from an inferiority complex, but they try to hide it by being unapproachable or behaving aggressively. They should work on building their self-confidence because its lack poses a problem in their everyday life.

They are very kind and helpful but can be prone to sulking and moments of silence without apparent reasons. These people are prone to mood swings, which range from sadness, depression, anger, accusing, etc.

They can often be prone to accusing others for their misfortune or their mistakes. They can have a problem with apologizing and they often take things and people for granted.

Because of their insecure nature and their obvious inability to manage well in many situations, these people are often helped by other people who desire to help them overcome their complexes.

What often happens is that these people refuse to recognize their help and act as if nothing happened.

Their complexes are getting them, and their ego is not allowing them to accept the fact that they have issues with self-esteem and other personality related issues and that they need to deal with them.

These people are reliable and responsible, but they don’t have the initiative and act only when they are told.

They might feel that they have managerial skills, but they usually don’t, unless they have an influence of some other sign in their natal birth chart. They are good at performing the tasks that were given to them.

They are good friends but might be prone to wanting to have things their way which can bother the people who are close to them. They could either tolerate their behavior or argue with them.

The good traits of Sun in Cancer and Moon in Aries:

The bad traits of Sun in Cancer and Moon in Aries:

People with Cancer Sun and Aries Moon are romantic and desire to be in a committed relationship.

They can be very sensitive, and their partner needs to be someone who is very tolerant and is able to put up with their frequent mood changes and their insecurities.

These people can be very emotionally demanding and draining.

Most of the times it is hard to understand their behavior. They are capable of changing their mood in an instant without a warning and explanation.

Their partners often have a problem figuring out what happened and why they have suddenly begun acting so distant and stopped talking to them.

They have kind and generous hearts; they are very gentle, tender, fun, amusing, and super nice when they are in a good mood. When they are not in a good mood, they usually turn into a grumpy person who is bothered by everything or they stop talking.

Life with these people is not easy, but it has its benefits. They are usually faithful and loyal partners. They prefer formal commitments, and they don’t like to wait long until they get married.

They can be prone to quarrels and aggressive displays of their mood, which makes them a bad partner for people who are not quarrelsome types.

For people who love dealing with their issues through conversation and compromise, these people might not be the best choice.

Their insecurity constantly pushes these people to prove their worth and accuse others of not being appreciated enough. The reality usually is that they often don’t appreciate what others are doing for these people.

In some cases, they can be prone to having conflicts with their spouses or long-term romantic partners.

They make good and organized spouses and they do their responsibilities without mistake.

They take good care of their house and are loyal to their spouse. They prefer spending time at home, and they often choose to do some activities and socializing with friends at their house. They rarely go out and enjoy relaxing in the comfort of their homes.

These people are romantic and appear timid. With their partners, they are also passionate and express their intimate desires. They need a strong partner they could rely on. They can be prone to clingy behavior.

The best match for a person who is a Cancer sun and Aries moon is someone who is able to deal with their insecurity and tendency to accuse others because they desire to defend their inability to accept their weaknesses and inadequacy.

Possibly the best choice would be an earth sign because of their patience and confidence.

These people won’t provoke these people’s ego and they will be the most likely ones to inspire their need to justify their actions and prove their value and abilities.

Another good choice would also be a water sign because of their ability to understand these people’s sensitivity and their need to hide and ignore their weaknesses.

Fire and air signs would not be a good match for these people because they wouldn’t be able to tolerate their behavior and would also hurt these people’s feelings with their insensitivity and lack of patience to deal with their issues.

People with Sun in Cancer and Moon in Aries can have contradicting behavior and reactions.

They are often timid and insecure, and they feel that they can accomplish much more than they actually achieve.

Their disappointment with their behavior causes them to react angrily and improperly in certain situations. They are prone to accusing others for their failures and mistakes, never accepting their responsibility for the things they experience.

Their ego usually doesn’t allow them to admit their weaknesses. They are also prone to taking people and things for granted.

They have a caring and nurturing nature and they are good at performing their duties and responsibilities. They are loyal and devoted to their partners and in some cases can be overly dependent and act clingy.

These people are not a good match for a person who is independent and desires a partner who will not be a burden. They can be prone to moodiness and frequent mood changes without explaining the reasons for their behavior.

These people need to work on building their self-confidence and working on dealing with their ego issues and insecurity.

They also need to become more appreciative of the things other people are doing for them and express their gratitude instead of taking them and their efforts for granted.

Their ideal partner would be someone who is tolerant and can understand their sensitive and yet insecure nature and their need to protect themselves by pretending that they are different.

Their partner needs to be patient and try to help them overcome the issues with their confidence and insecurity; ideally, that would be a person who doesn’t provoke their pride and ego and their desire to prove themselves and their worth.