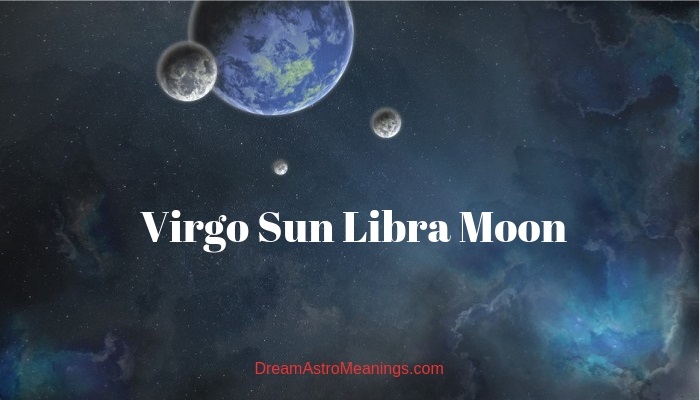 People from our surroundings usually notice our sun side of personality, while the moon side is usually visible only to the people we know best.

Some parts of our moon side, we keep private from everyone.

People with sun in Virgo and moon in Libra are kind and gentle beings. They are very polite and have a desire to make everyone happy. These people also don’t like quarrels and conflicts.

They do their best to keep their relationships harmonious and make compromises whenever it is necessary. They desire balance and stability in their lives and will do whatever it takes to provide it.

Although they are known to make compromises whenever it is possible, they could be considered rigid when it comes to their beliefs.

If they consider something is right, they won’t back up and change their minds.

People who know them well know about this trait of theirs, but people who know them vaguely, could be surprised when these remarkably kind and tolerant beings become rigid and refuse to change their opinion or do something they don’t want to (even if it benefits them).

These people usually make excellent coworkers, but are also known to be brutally direct and honest when it comes to expressing their opinions. They are very righteous and truthful and fight for people’s rights.

They are prone to reacting not only when their rights are jeopardized by someone or something, but also when someone else has been experiencing something similar.

This trait shows their humanitarian and helpful nature, but it often causes them problems.

Also, they often experience a lack of gratitude and appreciation from the people they have helped, jeopardizing their peace and more.

They are very detailed and precise. They usually desire to know all the fact in advance so they could make thorough plans for their activities. They don’t like making mistakes and do what they can to prevent it.

With Libra in combination, they could have a problem with taking into action, but once they start they usually don’t stop until the job is finished.

They are usually organized, but could have periods of procrastination and laziness.

These people are hard workers and they put in all their efforts without reserve so that the work would be done in the best possible way.

Often they are even mocked by their colleagues who don’t have as developed working habits (usually behind their backs) for giving themselves too much.

They are usually aware of these comments but they usually choose not to react, keeping their peace.

When they are provoked beyond means, they tend to react severely, to the surprise of the people around them.

They are good at creating their financial stability because they are hard-working and diligent.

These people are rarely super wealthy, but they usually manage to provide a substantial amount of money to have a stable and relaxed living.

Libra moon is the one which provokes them to spend money on beauty items, such as clothes, makeup, artworks, etc. but their Virgo sun usually prevents them from jeopardizing their financial security.

In some cases, they tend to exaggerate in spending which causes them to be in constant debt which can be psychologically draining and very disturbing to these people.

These people usually have a great personal style and love beauty. They are usually very tidy and pay much attention to their personal hygiene. Their houses tend to be spotless and they tend to spend a lot of their time in tidying.

They are usually very informed and enjoy visiting cultural events. They usually have excellent manners and nice expression.

They pay a lot of intention not to insult or disturb anyone with their words or with their actions. Thoughtfulness is one of the main traits these people have.

On the other side, they could be prone to be overly critical and judgmental towards people’s behavior because they naturally strive towards perfection in everything.

Another thing these people should work on is their tendency to be indecisive and overthink things.

The good traits of Sun in Virgo and Moon in Libra:

The bad traits of Sun in Virgo and Moon in Libra:

People with sun in Virgo and moon in Libra are usually commitment types, although some of them could incline towards avoiding it because they love their freedom and independence too much.

These people usually have a balanced and harmonious character and they strive towards creating it in all their relationships, especially their romantic ones.

If a person has a conflicting personality they tend to avoid them.

They seek partners they could communicate with on an equal level and someone who will make them feel relaxed and not tensed. They have a nature prone to making compromises which is a trait of great importance for any kind of relationship.

These people have a talent for neutralizing conflicting situations and establishing peace and balance.

They seek a partner with similar traits, but in some cases, if they have predominately challenging aspects of their personal planets, they could be prone to attracting partners with conflicting characters in their charts, and it will be a part of their life lessons to learn how to deal with that kind of relationships.

These people have a tender nature and are very gentle and kind.

Aggressive behavior and overly passionate partners usually repulse them (unless they have some planetary placements in their natal chart which give them these traits as well).

They naturally strive towards calm and relaxed partnerships where they talk about everything with their partners and spouses and make their decisions together.

They are usually commitment types but can also spend their entire lives with one partner without getting married to them.

For these people it is all about the harmony and love between two people and the formality don’t mean much if that lacks in a relationship.

They need to relax first but they enjoy expressing their love and emotions towards their partners, and want them to be able to reciprocate that.

Some of the major points of potential conflict and issues in their relationships is their tendency to be overly critical and judgmental, as well as their sometimes compulsive cleanliness and strive towards perfection.

They could be prone to judging their partner’s or spouse’s actions and behavior trying to mold them into their own set of rules and criteria, without trying to accept their individuality and need to behave as they feel.

Their Libra moon helps a lot to overcome these situations because it makes them compromise with their partners about their different approach to some matters and meet in the middle so that both sides could be satisfied.

They are excellent organizers and usually take on that role in their relationship or marriage.

They love to consult their partner’s our spouse’s when making important decisions regarding their life together and enjoy finding compromise solutions when there is no mutual agreement at first.

These people love going out with their partners, but they also enjoy spending quality time at home doing things together.

These people are good parents and have a balanced approach to raising their children. Virgo can sometimes be overly rigid and Libra could be overly complaisant.

The best match for a person who is a Virgo sun and Libra moon is a partner who has both air and earth element.

The ideal scenario would be someone who has either a prominent Libra or Virgo influence in their chart, or preferably both.

Other elements, such as water and fire could be a good match providing they have some Virgo or Libra influence in their chart for compatibility.

These people usually have a talent for adapting and are prone to compromises, which makes them easy to get along with almost anyone who doesn’t have a conflicting and aggressive nature, which is usually a great deal breaker for these people.

People with sun in Virgo and moon in Libra usually have calm and harmonious natures.

They are stable and reliable. They are usually commitment types and are good at making compromises which are necessary for long-term relationships and marriages.

They are very honest and straightforward and if provoked they will tell their opinion without hesitation.

They don’t like aggressive people and desire partners who have similar traits to theirs.

These people can be prone to judging and criticizing their partner’s actions and behavior, but their compromising nature usually manages to find a solution which will satisfy both partners.

They have a good approach to raising their children. Their kids need to fulfill their duties but also have a dose of freedom to do their own thing.

They are gentle and kind people who enjoy expressing their love for their partners, expecting the same in return.