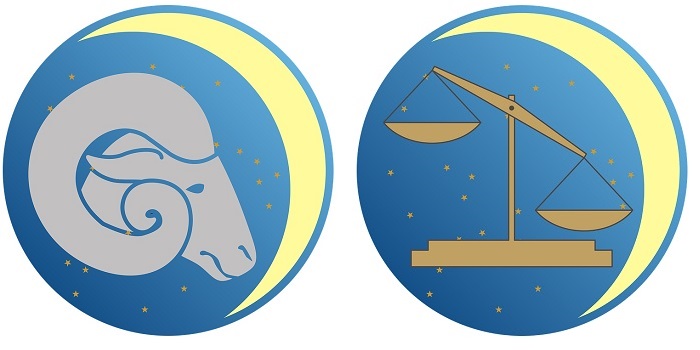 While zodiac compatibility cannot give you definite answer to questions about perspective of your relationship, it could be very useful to know if stars are inclined towards your love life.

Of course, not all combinations of particular signs have the same destiny, because individual characteristic play not a negligible role. If your signs astrologically match well, you probably have greater chances for a fulfilling romantic relationship.

However, it is not always the most defining factor. It could happen that two people are deeply fallen for one another, even if their signs are opposing.

On the other hand, if people whose zodiac sign have great astrological perspective simply neglect the fact, it is likely their romance would be short term.

At the end of the day, commitment, understanding and listening matter the most. There are always extremes!

Today we will talk about a pretty favorable combination of Aries man and Libra woman.

As you probably know, if you have ever met an Aries man (or, more likely, if you have one in your closes surroundings, your family or else), he is a man that takes initiative.

He hates waiting, he does not like making plans, he could do things in rush and haste and he despises not taking action. He will literally burn out of impatience, if he has set his mind onto something.

However, they will not waste time fantasizing much. If an Aries recognizes a woman as a potential life companion, he will act, most probably immediately. He does not like too long flirting and games of seduction, although he could really be a gentleman.

Aries men are tough, they are genuinely masculine and they use the fact to their advantage.

Ladies easily fall for their macho and manly approach, although some would find them to intense and open. Aries men are known to have difficulties in suppressing and holding their emotions inside; they are not afraid of expressing their feelings very directly and openly.

They could be aggressive and intimidating; they would rarely spare you their rage, if provoked.

On the other side, such strong energy has its positive aspect, of course. An Aries man is passionate about everything in his life. He goes into it with an open heart, fully, to the end.

He is not discouraged by failure. Aries men are self-confident and they would never give up their cause.

If they fail in achieving something, they will pull themselves back together and move on.

There are not many regrets in an Aries life. What has been done, is done and he is perfectly aware of that. This astoundingly charismatic and bold man is born to be in leading position; he possesses skills of an executor, the one who does.

While he is intelligent, he is likely to act thoughtlessly and in haste, because he is restless by nature.

However, Aries men have one goal; they would love to settle down and start family of their own. They are very much inclined towards such an idea, only they would like it here and now.

Nevertheless, they will do whatever it takes to reach their goal. An Aries man is always caring and protective of his woman, of his family and children.

He is a loyal, positive and talkative friend who inspires others. An Aries could be recognized from miles away; he is loud, usually physically fit and always about doing something new and, perhaps, extreme to the ears of his friends.

Aries men are admired, respected, loved and sometimes feared off.

Libra women are cunning and intuitive. They are always one step ahead of others, but not in a hasty, stressful manner; they find it natural. They are relaxed, self-confident and they always work to make the best out of what the destiny has offered.

Libra women are fearless, especially when it comes to career. What is more important, they rarely suffer from vanity or self-pity.

A Libra woman is capable of climbing the social and professional ladder from the lowest position up to the highest, without any self-doubt and complex. While many others would find it difficult to get along with responsibilities that are unavoidable at leading positions,

Libra women feel quite comfortable and do not stress themselves much about it. They take it easy.

While in professional and career area of life they could be quite determined, they are unbearably indecisive when it comes to other things.

When it comes to choosing a partner, for example, Libras could be in constant re-examination of this and that about their potential partner and could be particularly hairsplitting. That could be annoying and repulsive.

However, once a Libra falls in love, she loves eternally. Libra women are known as emotional, passionate and compassionate. When they love, they love fully.

They would rarely give up of a romantic relationship and it usually happens that either a partner decides of leaving or the two make the decision together. You really have to be extremely rude and troublesome to make a Libra leave you.

They are real team players, but they would never let someone manipulates them; their intuition would not let that happen. They are capable of seeing through peoples’ intentions.

Libra women have very strong sense of justice and balance. Libras seek for harmony and peace and they embody both sides of a scale; they are always trying to align scale pans.

Libra women are known to be both emotional and passionate as well as rational and thoughtful. They are true masters of making others forgive their small tricks. A Libra woman could wrong you, but her charms would make you forget about it in matters of second.

Libra woman knows when the time is to act rationally and when to let her feelings overwhelm her. Libras could be both passive and active, depending on how they see the situation they find themselves in.

They are guided by both logic and feelings. In Love life, a Libra woman seeks for a partner who could understand her and whom she could rely on.

Libra women love seduction, games and skills in sex. A Libra woman is said to be particularly a talented lover, usually very feminine and attractive.

This particular astrological combination has good chances to succeed. These two may have their differences, but they could find a way to harmonize them, easier than some other couples could.

Aries men and Libra women could use their differences as advantages; it is likely they will not have many troubles over them. What Aries does not have, he will find it in Libra and vice versa.

This particular combination proves that differences could play a major factor in mutual attraction. A relationship between an Aries man and a Libra woman often starts quickly, sometimes even at the first sight (even if Libras are known to beat about the bush).

Typically, their connection is light, positive, as a breeze.

They rarely have many arguments and they usually seem happy and relaxed together, which they are.

Both partners possess Yang energy, meaning they are open when it comes to communication in a relationship. They would always try to find a way to settle arguments down through being as objective as possible.

Both are cardinal signs, meaning they both love to take initiative. It is of essential importance for their relationship, because it means there are many things they could do together.

When they make plans or organize things (yes, even the hasty Aries does it!), the prove to be a great team. While enthusiastic and energetic Aries openly and directly expresses his ideas, diplomatic Libra finds it enjoyable to go through these suggestions and make more sense of them.

These two work well together; they spend quality time together both at home and elsewhere.

Libra woman fires up the flame of Aries man. Fire and air go well together. While Aries brings fire and passion to their relationship, Libra balances the energy given perfectly. These two could make truly a harmonious match on any plan.

Love compatibility of these two is not one hundred percent, but it has an amazing potential to work out fine, without much tension and sacrifice.

Partnership between an Aries man and a Libra woman is perspective and possess great potential for success. Both of partners in this match are focused on one another, but in moderate, not pressing, way.

They support each other and motivate one another. Love and romance are usually pretty cool, spontaneous and enjoyable. Libra is a breeze to fire Aries’ flame; it is a perfect description.

Perhaps it is only the Libra to set Aries on fire and be able to control his flame; it is an amazing combination. It is true Libras, especially women, love foreplay and that Aries men are impatient and direct; they want it now.

However, in this case, it all goes smoothly; Libra woman can handle Aries’ flame and direct it, perfectly. They enjoy quality and the most pleasurable time in their bedroom.

All other aspects of their connection work very well, just as we have mentioned. Aries brings energy, enthusiasm and curiosity into a relationship or a marriage, while Libra brings ratio, charm and dignity.

With Aries being impulsive and direct and Libra thoughtful and a bit calculated, this relationship represents a very well balanced mixture of temperaments. This is one of rare couples where differences could be taken as a great advantage.

If it happens that an Aries man and a Libra woman cannot settle their differences and decide to split up or divorce, it is rarely a dramatic event. They usually bring such a decision together.

Even after separation, these two could maintain good relations. In fact, they would both keep time they have spent together in a positive memory.

Since these two generally go very well together, there is no reason they cannot be good friends. If there is no physical attraction between them, which both instantly know, they could be truly great friends.

They are very supportive, both. Libra woman is kind, intelligent and not rushing; she has a great intuition. Aries man is all about taking some action and spreading his amazing energy around.

Just as in love life or marriage, these two could be companions for life, without a thought on romance.

Libra woman is the one who could calm down emotional Aries, because she understands his emotions, but sees things could be settled down differently. She helps her friend Aries to channel his energy, while Aries motivates Libra to take some action.

They are, overall, a promising match, in every sense.

An Aries man and Libra woman are usually perceived as a happy couple in eyes of other people. What is more important is that they do not act; they are not interested in playing roles.

They are indeed happy together. They are some of those couples you could see shopping together with one making suggestions, but other deciding a buying strategy.

They are very cooperative couple and it could be both seen and felt around. They emit harmonizing energy! We could be free to say that this entire relationship is a cool fact on its own.

There is no waste of energy here. Aries and Libra inspire one another to make the best out of themselves, together.

To spice things up, we have selected several famous Aries and Libra names. Famous representatives of Aries men include Akira Kurosawa, Eddie Murphy and Hugo Weaving.

This couple has amazing perspective and could be very successful.

Aries and Libra match well together, regardless of sex, but we could say this particular combination has a great potential.

The greatest thing about this couple is that there is not much drama over anything.

They are capable of listening to one another and act diplomatically. They see how well their zodiac traits perfectly supplement and fit one another, so they are very likely to give their connection all chances to develop.