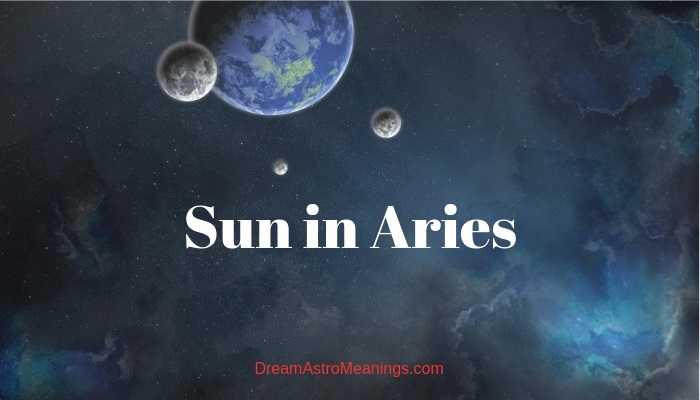 The sun is the central star in the Solar system and the most important source of energy for our life on planet Earth. The Sun’s mass is around 330,000 times of the mass of the Earth and its diameter is 109 times bigger than the diameter of the Earth. The Sun is composed mostly composed of hydrogen and the rest mostly helium.

The Sun is estimated to have formed around 4.6 billion years ago. Because of its importance for life on Earth it has been given a godly status by many cultures since antique times.

In astrology the Sun represents our conscious mind. It rules our will and our life force. The Sun in our natal charts usually describes our life purpose. The Sun also represents our ego and our identity, as well as our overall vitality. This planet in our chart describes what we are learning to become.

The Sun gives us traits like determination, a sense of purpose and direction in life, as well as creativity. It also makes people judgmental, and self-centered. The Sun’s placement in a certain sign of the Zodiac, describes the person’s life purpose and their influence on the world in general. The Sun also describes our character and our main personality traits.

The Sun is exalted in the sign of Aries, and in this sign the Sun is powerful as well.

The Sun describes the things that could motivate us. The sign the Sun is placed in indicates what is our most important focus in life and the thing we consider very important.

Although the sign where the Sun is placed mostly describes an individual’s personality, the Sun’s overall influence on a person should be determined as a combination of the Sun sign, house placement, and the aspects with other planet.

Men born with Sun in Aries are energetic and go after their desires without hesitation. They can be rash and thoughtless in their decisions and actions, but their will and determination compensates these traits and usually makes them succeed in their endeavors.

Aries men are usually sports types who need to be in constant movement and action. They often choose a profession somehow related to sports or they actively practice sports until late in life. They are usually very vital and possess good health.

These men possess great courage and are not easily discouraged by the obstacles they encounter. They are born leaders who don’t let others tell them what to do. They are inspired by new things and want to be first in every activity. These men are very competitive and love winning.

They are passionate and in some cases prone to changing partners. They need to have a lead role in their relationship.

Women with Sun in Aries can be surprisingly direct and even unpleasant in their honesty.

They often have a problem with controlling their words and reactions which causes them problems in interacting with other people. Although they might appear loud and sometimes rude, these women have a kind heart and are very helpful. They offer their help to those in need even if they are not asked to.

These women are very energetic and ambitious. They know exactly what they want and don’t hesitate to go after it. They have prominent leadership qualities and often end up in positions of power. These women (like Aries men) are sports types and often actively practice some sports. They are well-built, have a lot of stamina, and usually have great health.

They are often prone to taking thoughtless actions and risks, thus jeopardizing their wellbeing and sometimes the wellbeing of others. They are very independent and confident, and don’t like being told what to do.

They can be quite aggressive and unable to control their emotional reactions. These women can be prone to getting into arguments and conflicts because of their fiery temperament. They need to learn the skill of self-control and managing their anger and discontent.

Some of the good traits of Sun in Aries:

Some of the bad traits of Sun in Aries:

The Sun is exalted in the sign of Aries, which means that it can exhibit its beneficial influence on a person when it is placed in this sign. The start of the sign of Aries marks the beginning of the Zodiacal year.

People born under this sign are full of initiative and always ready for action. Their reactions are quick and bold and they are usually very courageous. These people are driven by success and they are highly motivated to achieve their goals.

The sign of Aries is a fire sign, which makes these people have a fiery temperament. These people are often leaders which others love to follow.

They are brave and usually don’t think of the consequences before taking their actions. They can be prone to thoughtless and rash decisions and taking unnecessary risks, which often pay off.

Aries people are adventurous types and are very independent. They don’t like to be told what to do and they usually don’t listen to anyone’s advice. They follow their own lead, even if it means making mistakes.

Their boldness and strong will usually take them to the place they want to be and most people respect them for that.

They are action-oriented and make things happen instead just talking about them like some other signs do. They might have a problem with finishing the things they have started because they might get bored before the final realization or if things don’t go as fast paced as they have planned them to. They need to practice endurance, discipline, and persistence if they don’t want to accomplish their desired goals.

These people often have a desire to explore the unknown and be the first in doing something no one else has done before them. They are adventurers and optimists who don’t get easily discouraged.

Their problem can be that they get easily overwhelmed by a new idea, and begin its realization without thinking about all potential consequences.

They love winning and being first. These people are very competitive and are always in search of a good competition where they could show off with their qualities. They love a good challenge and the prospect of being the winner is their greatest motivational force.

If nothing much is happening in their lives, they will come up with a challenge, simply to break the routine and stagnation.

These people are always ready for action and they don’t like to be stuck in one place. They prefer dynamic environments and interactions with people. The sign of Aries is ruled by the planet Mars, ruler of conflicts and war, which often makes these people aggressive and prone to angrily outbursts.

They can be prone to getting into conflicts with others, especially with the ones who disagree with them. They are very impulsive and don’t easily control their reactions which might cause serious problems in their life, especially in their workplace.

These people should work on learning how to control their reactions and calming their impulsive temperament. They can be very impatient, which is one of the main issues they need to work on.

They are leader types and could have problems getting along with people who exhibit the same traits. They are not very adaptable and are not prone to making a compromise, which is something they should change if they want to get the best of their social interactions with others.

These people often have a problem following orders, and often get in conflict with their authority figures. They have a hard time executing orders and doing what they have been told to do, even if the order has come from their superiors at work.

One of the reasons for their behavior might be their strong ego which doesn’t allow them to comply easily with anyone’s will. They also have a need to remain independent and follow their own lead.

Because of their issues with authority figures, these people usually strive to be in authority positions or be their own bosses. That way they won’t get in a position of being told what to do. Instead, they will be the ones telling others what to do. That way, their true nature can shine completely.

These people are usually very passionate. They are also very enthusiastic. Their reactions are fast, and they easily spot an opportunity to achieve their goals.

They can have an impractical approach to doing things, and not pay much attention to details, and these are also the traits they should work on changing; otherwise, they might end up having a past full of missed opportunities and projects they have only started and never finished because they were never possible to achieve.

They can be very self-centered and even selfish, and focused entirely on fulfilling their needs. In this process they can jeopardize other people’s needs and rights, which can lead them to conflicts with them.

Once again, it is important for these people to learn the skills of cooperation and making compromises. That way, they will acquire allies willing to help them back with their endeavors.

Although they might be a bit self-centered and egotistic, these people usually have kind hearts and good souls, and are ready to help others at any time. They are very honest and directly express their opinions oftentimes not thinking about the potential consequences of their words.

Their approach to romantic partnerships is also direct. They don’t have a problem openly expressing their interest and approaching a person they like. They need to be the lead force in their relationships and that is something their partners will need to accept.

People with Sun in Aries are temperamental and energetic. These people know what they want and go after their desires.

They are born leaders and don’t like being told what to do. They usually occupy managerial positions or they end up being their own bosses. They are passionate and don’t have a problem expressing their opinion.

Sometimes these people can exaggerate and be very direct and honest, up to the point of hurting other people’s feelings.

They love action and are inspired by new things. Their reactions are often rash and they might end up making thoughtless decisions and taking risks which might jeopardize their wellbeing.

These people are motivated by success and love competing to win.

They have a desire to be the first on all occasions. They need to be the leader in their personal relationships.

Although they can be self-centered and possess a strong ego, these people have kind and generous hearts, and are always ready to help others.