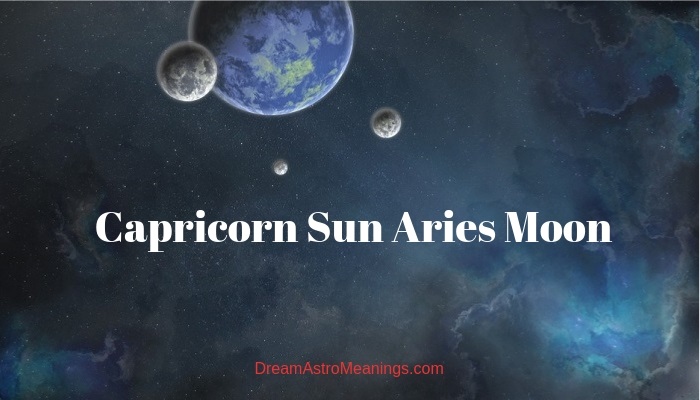 The sun sign in our horoscope describes our personality and the way we tend to present ourselves to the outer world.

The moon sign, on the other hand, describes our emotions and our inner being.

It reveals our subconscious content and the things about us that we are not prepared to share with anyone but our closest friends.

People with sun in Capricorn and moon in Aries have strong personalities. Their character is a combination of earth and fire element. Both their sun and moon are in signs who exhibit great power of will and confidence.

They are determined to succeed and doing give up from their goals easily. Their moon often pushes them to take some irrational actions, but in general, these people are calm and stable, and think well before they act.

Their main motivation is success and being first in all their activities. They are inspired by difficulties and competition and always want to be better than others.

These people have a very competitive spirit and often compare themselves and their success to others.

They can be self-centered and egotistic and often desire their word to be the last saying in a discussion.

They usually have a high opinion about themselves and their qualities and believe that they can achieve everything they desire.

For them, obstacles and challenges have a motivating effect. They don’t let these things discourage them. They are focused on the result and don’t let other things distract them.

When they encounter a problem, they immediately tend to confront it and deal with it instead of putting it under the rug; that is what gives them an advantage over other people who don’t have such willpower and determination.

They don’t accept the possibility of failure in their minds. This attitude is halfway towards their success.

They desire to be financially stable and secure, but they often have irrational financial decisions which jeopardize their financial stability.

These people love quality and luxury items, but they often tend to spend beyond their means to get what they want.

They often don’t have the patience to wait for their financial stability to grow before satisfying their desires and are prone to impulsively spend on items they don’t actually need, but they like.

These people can have a bad temper and be prone to aggressive and violent outbursts of anger.

It is usually not advisable to provoke them because they can enter into a state of uncontrollable rage at times (usually when the planets in their natal chart, especially their sun and moon are in bad aspects, or they make bad aspects with planets like Saturn, Mars, Uranus, and Pluto).

In case of badly aspected planets, these people could be prone to encounters with people who have such violent tendencies and get in conflicts with them.

They are very confident and many people admire their personality. They are dignified and want people to respect them.

These people might be very direct and use harsh words when they want to say something, but they don’t mind others telling them their opinions about them.

They might be prone to imposing their opinions to others which might jeopardize their relationships with others and cause issues with people.

These people can be very intolerant and don’t pay attention to other people’s needs. They are often focused on their interests and in some cases are able to walk over others to fulfill their desires.

These people can at times be very cruel and inconsiderate. They might be prone to chase their goals regardless of the fact that they might be hurting others with their actions.

They should learn to become more tolerant and considerate of other people’s needs and opinions; otherwise, they might end up quarreling with others and being avoided because of these traits.

They make good leaders, although their tendency to ignore people’s needs might create difficulties in the relations with their subordinates. They should develop a sense of compassion for others which will benefit them and the members of their team as well.

Their drive for success might bring these people to high positions in society. They need to learn diplomacy skills and tolerance to be able to remain there.

These people are very enduring and they can withstand great physical strains.

They never complain and don’t like people who have a habit of complaining. They often have an attitude of a stoic.

The good traits of Sun in Capricorn and Moon in Aries:

The bad traits of Sun in Capricorn and Moon in Aries:

People with sun in Capricorn and moon in Aries are very passionate and have a strong urge for physical intimacy.

They desire a partner who will be able to adequately respond to their initiative. They can be prone to changing partners mostly because of their strong physical urges.

These people are usually not very emotional, and are focused more on their desires and needs than of those of their partner’s.

They usually need to be the leaders in all their relationships and have the last saying about everything. They often act as if they know everything which can be a burden for their partners and spouses who would like their opinion to be valued as well.

These people can be very difficult to get along because they can have a bad temper and rigid attitude and beliefs.

Although in general, these people are stable and tend to think before acting, they can also be prone to irrational decisions which could jeopardize both them and their partner, without even consulting them.

This behavior could be difficult to tolerate for many of their partners and spouses.

Their ideal partner should be someone who is supportive of their actions and their future success. They usually need to be the ones who are in the center of attention and need a strong supporter of their goals.

Their partner needs to be satisfied with this role or won’t be a suitable match for them.

Of course, not all of the people with this sun/moon placement will have such requirements, but those who have these ambitions will.

They are usually physically active, and desire a partner who has the same preferences. These people love sports and enjoy doing sports activities alongside their partners. They are often the ones who initiate their partners into the world of sports.

They often have the need to teach their partners things they know. They need their partner’s admiration and support.

These people don’t like people who are complaining all the time, and their partners should have a similar attitude. They cannot be with someone who finds every obstacle difficult and gets discouraged by every issue they encounter.

They want someone reliable and brave, someone who will be able to confront all the difficulties and challenges of their life together and help them build their future.

As parents, these people are strict and demanding of their children. They want them to be the best in school as well as in sports.

They have a competitive spirit and teach their children to be the same. They want to build their confidence and desire to succeed in all their endeavors.

They also teach their children to be enduring and not complaining about everything.

The best match for a sun Capricorn and moon in Aries is an earth or water sign with fire or air element in their natal charts.

These people need a partner who is confident and stable, but also tolerant of their need to be first at everything. That is why they

People with sun in Capricorn and moon in Aries are confident, strong- willed, and know what they want.

These people don’t give up on their goals easily and they are only motivated by challenges to keep moving towards their goals. They are very enduring and possess great physical stamina.

They never complain and don’t like people who have a tendency of complaining, especially when they are candidates to become their partners or spouses. They are prone to imposing their opinions to others and have a high opinion of themselves.

These people usually want to be in the center of attention and they like to be admired, especially by their partners and spouses.

They are very organized and ambitious. They aim to reach high in life.

They are usually capable of making money and creating financial stability for themselves and their family members, but sometimes can be prone to making irrational financial decisions and spending money on useless things.

These people are usually passionate and have strong physical urges. They can be prone to cheating and changing partners, but with the right person they usually stop with such activities.

These people have an adventurous nature and are often sports types.

They often transfer that love onto their partners and often go to adventures together. They prefer partners who are active and enduring as they are.

They can be very demanding as parents because they desire their children’s success in school as well in sports activities. They teach their children to be winners and to strive towards success.

In some cases (especially when their sun and moon are badly placed in their natal chart) these people could be prone to aggressiveness and outbursts of anger.

They can also be prone to attracting aggressive and conflicting personalities or circumstances in their lives.

It is not advisable to provoke these people because they can be dangerous opponents.