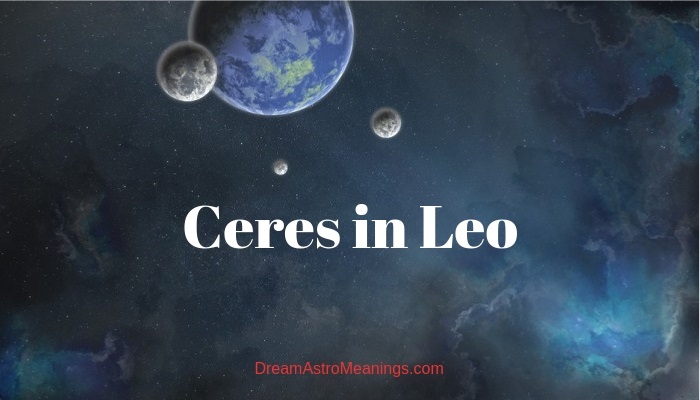 Ceres is the smallest registered dwarf planet in our Solar system and the largest in the asteroid belt. It is located on the asteroid belt, between the Red planet and Jupiter. Italian priest, mathematician and astronomer, Giuseppe Piazzi discovered Ceres more than two centuries ago.

It is interesting to note that this planetoid was discovered on the first day of the New Year, 1801. Ceres is unique by several characteristics.

In astronomical terms, Ceres is interesting because it is an asteroid large enough to take nearly a sphere shape, thanks to its own gravity force.

The name Ceres originates from Ancient Roman mythology; Ceres was a Roman agricultural deity, the only one to be listed amongst Dii Consentes, the twelve major Roman deities, equivalent to Greek Olympus pantheon. Ceres was a major and an important deity for Ancient Romans.

This deity is identified with the Greek goddess Demeter. Myths of Ceres and Demeter are the same. It is the mythology from where astrological meaning of Ceres comes from. Ceres was a daughter of Saturn (Cronus) and a mother of Proserpine (Persephone, in Greek version).

The myth of Ceres tells about a devoted mother, ready to sacrifice everything in order to save her beloved daughter.

According to the legend, Pluto (Hades), the god of the realm of death, fell in love with beautiful Proserpine and wanted her all for himself. It happened that he took Proserpine against her will.

Partially, this myth was an announcement of the coming of the age of men dominance. Before that, the cult of the Supreme Mother was prevailing in many cultures.

Sad and angry Ceres turned the world upside down, in order to find her daughter. As the deity of crops, agriculture, vegetation, fertility and abundance, she stopped nurturing the land, out of grief.

All life was fading away; the earth got dry, plants, animals and people starving and dying. She did found Proserpine, but she was Pluto’s wife.

The story ends with a compromise, declared by gods. For three months, Proserpine stays with her husband, the equivalent of barren and cold season on earth, winter, reflecting Ceres’ suffering for the loss of her daughter.

They rest of the year, Proserpine spends with her mother and it is the period of flourish, abundance and life, reflecting Ceres’ happiness and her given divine powers.

Ceres is an important element of astrological analyses, because of the principles and ideas it symbolically represents. Ceres is an archetype of the Mother Earth or the Supreme Mother.

It is associated with motherly love and bonds with her children.

It is associated with care, nurture, unconditional love, suffering for dear ones, separation from them, and sacrifice for others. It is also about the acceptance of loss.

In an individual horoscope, Ceres represents one’s sense of care. It stands for caring and for being cared for. Ceres represents the way you express your care and love for others, especially the closest ones.

It particularly has to do with parental love, but also with the general idea about care, responsibility, devotion and love.

It also represents the way you expect of others to show you they care for you.

Every person is different and every one of us has their own idea about showing affection and supporting people we love.

The sign Ceres matches in your natal chart represents the way, the manner of caring and what you expect from others, in the same terms.

The astrological house represents the area of life you show your caring nature the most in and where you yourself find comfort.

What can we say about Ceres in Leo? Leo is a glorious, proud, masculine sign. It is marked by great self-respect, ambition, the need for recognition and reputation.

On the other hand, Leos are warm-hearted, passionate, ready to sacrifice themselves for the people they care the most. Remember how lionesses protect their cubs; it is the bond between a mother and a child of a genuine value. How does Ceres respond to that?

Ceres in Leo is manifests as devoted protector of one’s own children, there is no doubt in that. What about other aspects?

Ceres Leo people feed on attention and the best way to please them is to put them in the center of attention.

They expect and respect nothing less. They enjoy to be admired, worshiped and praised. This is the only way to show them you really care about them. The like being treated as they were royalty.

They would do the same for those they care for. They would support their loved ones ambition and see to help them realize their potentials in reality.

Ceres Leos are straightforward; they openly express their passions and feelings, so you could never lack their love and attention if they care for you. They are generous and warm-hearted people.

Leo Ceres people emit positive energy and share their optimism unconditionally. They are excellent role models. They boost other’s confidence and they are very proud if they could make someone achieve their goals.

It would be the best prize for them to see others succeeded because of their support.

Some of them would not even expect to be particularly rewarded for that, but are likely to talk around about their influence.

Ceres in Leo is a glorious example of incredible self-assurance.

These people support other’s talents and see to help their dear ones become independent and proud of themselves.

Ceres Leos are in need of attention and glorification; the best way to show them you care about them is to praise their personality, deeds and else.

They could be arrogant at times, but generally are not discouraged by not getting enough attention.

The greatest trait of Ceres Leos is their unconditional support of their closest ones and their overall generosity. These people have an extremely positive aura.

They feel important for helping other people and the outcomes of their passionate support is greatly satisfying to them.

These individuals have to find the way to express themselves in public and the public recognition is what feeds their self-esteem.