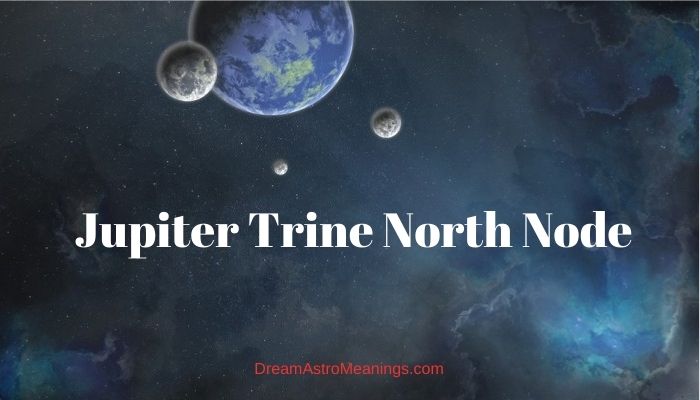 The outer planet in conjunction with one of the lunar nodes takes on special significance.

This reinforces the importance of this particular outer planet throughout a person’s life.

Like the connection of the inner planet with the Lunar Node, which we talked about in the previous chapter, the outer planet in conjunction with the North Node indicates those qualities that should be consciously developed during the current incarnation.

Sometimes this connection brings not so much material as spiritual benefits, but for this people have to work very hard.

For example, when it comes to dramatic art, they will appear in many films or roles; if they sing or compose music, they will be the authors of many recordings; if they write, they will publish many books, and so on.

Their work will receive a warm welcome and love from the audience, which will contribute to the growth of the material well-being of the authors. A number of talented people have this aspect.

The sign of the zodiac in which this connection falls carries information about these talents and whether they will manifest themselves mainly in the social, material or spiritual sphere.

Many owners of this aspect simply enjoy the fruits of good deeds performed in past lives, which often belonged to the material sphere; they don’t feel pressured, they don’t have to solve difficult problems or overcome obstacles. The cosmos smiles at them graciously. They often remain young for a very long time.

The connection of the South Node with Jupiter is also a philosophical aspect. Jupiter rules philosophy, jurisprudence and theological research, so a soul with this aspect comes into this world with the experience and knowledge that define its belief system.

Such people have very definite views and feel the responsibility to pass on what they have learned in the past. They can use their wisdom to contribute positively or negatively to public morality; their views may be narrow, or they may impose them on other people.

A person can feel how something is forcing him to develop qualities related to this planet. Opportunity and great potential are associated with a planet connecting to the North Node.

The planet near the South Node indicates the qualities developed in past incarnations. These qualities are habitual, and in order to use them, only minor efforts are required from a person.

In this scenario, a person brings with him into this life what needs to be improved. The talents associated with this planet can be further developed or used more fully, more positively and consciously.

Sometimes the planet in conjunction with the South Node symbolizes working through the failures of the past associated with this planet, or indicates that it takes several lives to learn the lessons symbolized by this planet.

If the planets are present at both poles of the axis of the nodes, then lessons of the past are prepared for a person, which must be worked out, as well as baits that will require effort and a successful mission. This is a kind of crossroads on the path of soul evolution, which guarantees a rich life.

In this life, a person gets a chance to achieve both material and spiritual progress. The North Node favors material wealth and influence in worldly life, while the South Node favors spiritual attainment.

Speaking of these connections, one should take a sufficiently large orbits, up to seven degrees or more.

However, in this book, giving examples of specific people, I have used a smaller orbits (usually three degrees). The more accurate the aspect, the more pronounced its influence.

A person has a healthy desire to acquire material things, and developing financial independence can provide many benefits. Madonna has this aspect in the second House, which is quite curious if you remember her “Materialist Girl” phase.

This aspect suits her in other respects, as it indicates the development of a higher philosophy by a person and the acquisition of wisdom by him.

This aspect brings a lot of positivism, the most negative manifestation of which can be extravagance or exorbitant optimism.

The house in which this connection falls shows in which particular area of ​​life such enthusiasm will be present.

This aspect can give too pronounced craving for excesses. However, all this is not bad, because the House of the Horoscope also indicates where a person should look for his luck.

By analogy with the connection of the North Node with the Sun, this aspect gives blessings, profit, protection and a life free from karmic debts.

Yes, and participation in the Olympiad – those who are parents will understand – here not so much knowledge and desire are required, but rather.

If the North Node is not located in conjunction with the MC, then it is very good if it is in a favorable aspect with the Midheaven point.

Aspects with the North Node will say that the person needs to develop new habits, different from those that were instilled in the family. Jupiter and the North Node of Rahu in Trigon.

This position of the Nodes contributes to the achievement of success through extreme conditions, through sudden changes, through self-sacrifice or renunciation.

In other words, the trine of Jupiter is an aspect of Santa Claus, who gives gifts to children for free, and if he is attentive and selfless enough, his bag will never empty, and the trine of the north node of Jupiter will occasionally come across gifts and absolutely extraordinary, if he is all gifts are addressed exclusively to himself, then the bag begins to gradually lose its luster, and the gifts fade.

This applies to the owners of the trine Jupiter Neptune, who are unusually talented in artistic and literary terms.

Although we have been together for 12 years, we should have switched on, in theory, already. We must definitely see which of the houses are the most filled, they carry the greatest energy stress to the couple.

Good interaction in the trine of the Moon and Jupiter helps the native. According to our observations, if the role played by an actor fits perfectly with his natal chart, then it very often becomes the flagship and one of the most significant roles in the life of an actor.

In addition, the Petrov cross migrated to the plant world, where the parasitic root acquired the aggregate value.

So far, we have thoroughly materialized our consciousness in order to understand and recognize the right to existence of the causal immaterial laws of life.

The promotion fails or the career and reputation achieved will suffer. A person has a lot of energy, including a mental person who can work in an outburst of passion, to do a lot of work in a short period of time.

Your intuition is well developed and is one of your most valuable tools. He opened my eyes to the world.

Which planet of the partner got on the cusp of the 1st house can be understood by the properties of the world that was opened.

The position of Jupiter in Leo voluntarily forces everything to start from feelings, to pass everything through the heart.

Aspects with the South Node can mean that a person needs to develop patience, not to run ahead of a steam locomotive, to be able to build a dialogue.

But the middle Eris in the stellium of the base is at the same time the top of the minor Palm, highlighted in green. You are gifted with both oratory and literary skills and have a refined artistic taste.

Yasser Arafat and Ariel Sharon are the last of the cohort of politicians with Pluto Cancer who still remain with Power. Description of the aspects of Jupiter and the Lunar Nodes of Rahu, Ketu, North and South in the compatibility chart, synastry.

Or out of a desire to appear better, although it is possible that out of good intentions, you will be capable of sweeping gestures that no one will appreciate. Saturn is the planet of responsibility, hard work, dedication, and time. Developed intuitive abilities, allowing a glimpse of super consciousness.

In a negative process, this can become an unreasonable waste of energy and destruction of the personality.

In his manual, Vitaly Weisberg takes a short excursion into history in order to trace the path of the origin of the discipline, tries to quickly consider some myths.

The task is not an easy one, because it is extremely difficult to describe in linear language the multiple impulses arising almost simultaneously in the spatial mental volume.

The sphere of influence will expand greatly, new entrepreneurial events will gain momentum, and professional or business recovery will be much easier than other periods.

If you choose to accept the challenge posed by the events of the eclipse, then while there may be an intense struggle of dependence on the saros series involved, the effect of the eclipse can be very long-term.

Aspects with the South Node can mean that a person needs to develop patience, not to run ahead of a steam locomotive, to be able to build a dialogue.

But the middle Eris in the stellium of the base is at the same time the top of the minor Palm, highlighted in green. You are gifted with both oratory and literary skills and have a refined artistic taste.