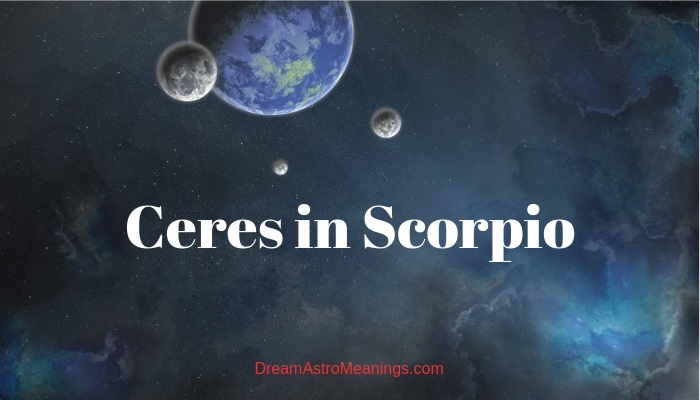 All heavenly bodies we analyze in astrological charts carry names and archetypical meanings of ancient deities from classical mythologies. The asteroid Ceres was named after the Roman deity of agriculture, crops and harvest.

The goddess Ceres is the only one agricultural deity to be listed amongst the twelve major Roman gods and goddesses. She is equivalent to Greek Demeter.

Cults of agricultural deities originate from much older times and they are associated with the motherly principle and fertility. They come from times of matriarchal worship.

Ceres embodies these archetypical images of the Supreme Mother. Ceres is the goddess of vegetation, growth, grains and everything associated with that. In the Greek mythology, the same associations stand for Demeter.

Along with her daughter Persephone, Demeter was the major deity in Eleusinian mysteries, the famed ‘secret’ cult abut vegetation cycles. The cult actually represents the myth of Demeter and Persephone, which we are going briefly to present you.

Roman conquest did not change the cult, so it is the same in Roman mythology about Ceres (Demeter) and Proserpine (Persephone).

The myth is about Pluto’s abduction of Proserpine; he wanted her to be his wife, so he took her against her will. Desperate mother Ceres searched the heaven and the earth in order to find and get back her daughter.

The myth ends with Proserpine spending three months in Pluto’s underworld kingdom and the rest of the year with her mother Ceres.

The myth is an allegory of seasonal changes, the three cycles that correspond with the loss, the search and the ascent of Proserpine. The land goes through similar changes throughout the year and it is a repeating pattern. Mad from grief, Ceres punished the earth and left it barren and dry; people and animals got sick and died.

After the compromise has been made, Ceres showed her gratitude by giving people the gift of growing grains. Ceres and Proserpine offered grains to Eleusinian prince, so that he could take it and spread it throughout the land.

People started growing and producing grain, the lands grew green and rich again and Ceres and Proserpine continued their faith, as the gods declared it.

In astrology, Ceres is associated with the motherly principle the goddess represents in mythology.

Ceres is a precious element of a birth chart, because it tells about ones sense of care for other people.

It is closely related to the relation between parents and children and everything that has to do with it; from parental love towards children to crisis of separation from them.

Depending on Ceres’ position in a natal chart, the channel of caring and nurturing energy differs in individual people.

This asteroid is critical for our sense of self-respect and it has to do with areas of life in which our self-esteem will grow or the opposite. Ceres represents our ability to care for others and our ability to accept others’ care.

If it is poorly related with other birth chart elements, if there are bad aspects, our nurturing sources and our own nurturing nature could become blocked.

However, Ceres is usually taken as a favorable element. It is always about care, kindness, nurturing, love and protection. It is true that it could represent one’s possessiveness, which is a reflection of the goddess Ceres’ possessive attitude towards her beloved daughter.

Dominant Ceres in a natal chart is very likely to make one a possessive and overly protective parent, especially mother.

Ceres in signs and houses is affected by the nature of these places in a natal chart. This means that the sign and the house directly affect our way of caring and determine our sources of getting nurtured.

Let us find out something about one of the most interesting Ceres sign matches, Ceres in Scorpio.

What does it mean to have Ceres in Scorpio in a natal chart?

Scorpio is a mysterious and emotionally deep sign, at the same time very sensible and sensing. Ceres Scorpio need to be nurtured through touch and emotions, especially in intimate terms.

They are passionate and the need to make strong and deep connections with dear people.

It gives them strength and makes them feel complete. They need both physical and emotional nurture and care.

They show their own affection the same way. Ceres Scorpio would definitely make you feel as they cared for you.

They are also attracted to mysteries and secrets and to transformative processes. They would guide you through your own process of personal transition and transformation and they will feel good about it.

They are masters of emotional control and they are better at teaching others to control their emotions than they are capable of doing it.

Ceres Scorpio are demanding in terms of emotional, physical and, well, pretty much about every aspect of affection and care. If they feel neglected, they start suspecting. They could become jealous, manipulative and extremely possessive.

Scorpio sign is possessive by nature; caring and protective nature of Ceres makes it doubled.

They offer the same in return. Ceres Scorpio show their affection and care directly, but not to everyone. They carefully choose people they are going fully to commit to.

They could be exclusive when it comes to that; for the greatest number of people, they remain mysterious and intriguing.

Intimate relationships are very important to them; they feel nurtured and complete once they find a partner that suits their demanding personality.

Ceres Scorpio have a great gift of guiding others through personal metamorphosis and they also feel empowered when they go through a transformative phase.

They crave for strong sensation in every area of life; it makes them feel alive and fulfilled. They like to help others feel deeper and stronger and by that help them feel more alive, as well.