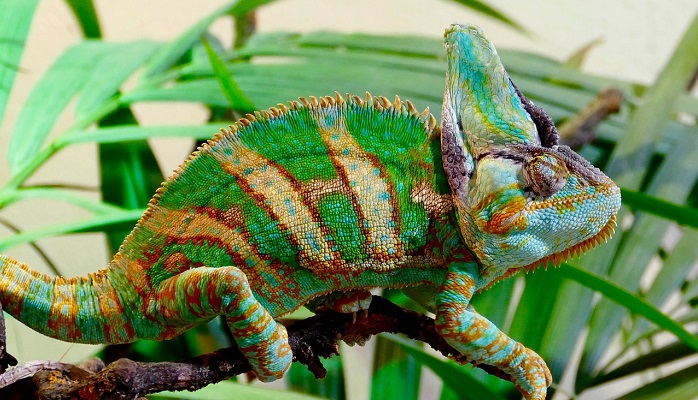 Chameleons are particularly interesting members of the huge reptiles’ family. These colorful lizards impress us by their incredible natural features and skills, making us ask ourselves if they are for real.

First thing that come to our minds mentioning chameleons are their natural ability of changing their skin color, in order to imitate their surroundings. However, that is only one from a long list of amazing facts about chameleons.

These little dragon-like creatures are different from all of their lizard relatives. Their physical appearance is distinctive, so you could never take them as any other species.

Chameleons have specific body shape, with very long, usually rolled up tail, strange eyes, no neck and amazingly long sticky tongue, not to mention their specific skin and color shifting.

All of these features are given to chameleons in order to help them survive.

If anyone mentions a chameleon, we usually think of a medium sized, screaming green one.

However, there are various types of chameleons and they do not look exactly the same.

However, they do share certain features. Chameleons live in Africa; their habitat is tropical rainforest environment. Chameleons love to climb and they are unlikely to be seen on the ground.

One of the major characteristics common in all chameleon varieties is that these lizard move slowly and they could spend hours without any movement.

These are predator type little ones, feeding on insects, but they are not aggressive and they are not to be called hunters.

A chameleon would patiently wait until am unlucky insect approaches on its own. 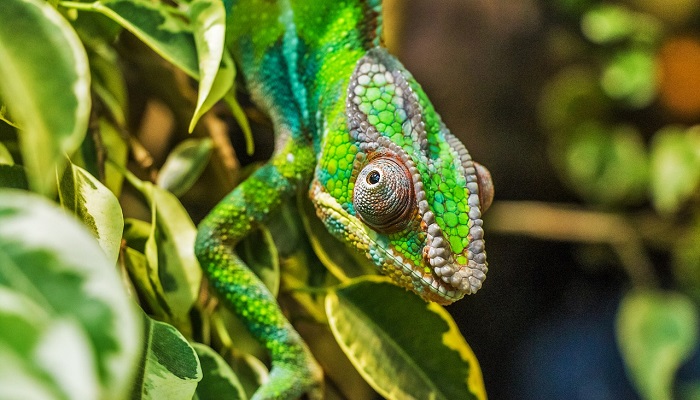 Before we dive into the world of symbols and try o understand all of the spiritual powers of amazing creatures such as chameleons, we will share with you some of the most impressive facts about these lizards. Every single one of these facts makes chameleons a powerful spirit animal and a fascinating, colorful symbol.

To name the most important ones, chameleons are known for their mastery of transformation, their eyesight, well-equipped body and senses.

All of chameleon species live in tropical African range, almost all of them are native species to Madagascar, home of some the most exotic living creatures on this planet.

There are varieties found in European southern parts, in the United States, California, Florida, Hawaii and some of them in Asia, Sri Lanka, in particular. In greater part of the world, they are considered exotic and unusual animals.

Generally, people believe chameleons change colors in order to fit into their surroundings, to completely blend in and disappear. However, scientific data suggest there are many other factors responsible for their color transformation, such is temperature levels, for example.

Chameleons are usually of brown or green color, but certain types can change color into that of the nearest object. The secret lies in the specific built of their skin; these lizards possess special type of skin cells, not to be found in any other living creature on the planet.

It is amazing how fast these pigmented cells response to ‘provocation’; the color shifting process takes only about twenty seconds.

In addition to this mastery of transformation, chameleons are known for their unusual eyes, which are commonly described as ‘telescopic’.

First of all, their eyes move each one regardless of another. This specific feature helps chameleons see in all directions and to notice their prey from great distances for a reptile.

Chameleons’ eyes have very small holes, while the whole of their eyeball is skin covered.

They can notice an insect from a great distance and patiently wait until it approaches into the range of their tongue.

Mentioning that, chameleons’ tongues are quite an impressive hunting gear. Their tongue is muscular, sticky and almost two times longer that the whole of a chameleon’s body. In addition, their tongue moves extremely fast and, in a matter of less than a second, a poor insect becomes a chameleon’s lunch.

Chameleons are not particularly good at hearing, just as most of other reptiles, but they possess ultra violet type of vision.

Chameleons are also true masters of climbing, since they live in treetops and come down to the ground only for some water and laying eggs. Their bodies are perfectly designed to move through treetops. Chameleons’ legs and fingers are perfectly fitted to help these lizards climb and hold on branches.

Well, chameleons do not run over treetops, they rather move extremely slowly. However, they are unlikely to fall off from trees.

Chameleons represent calmness, being static, patience, transformation, change, adaptability and harmony. Well, these creatures are quite impressive in many ways and they are rarely seen as something negative. Most of chameleons’ symbolism is positive and inspiring.

Chameleon motifs are, in modern culture, commonly associated with colors and art.

Let us find out the main symbolic meanings of a chameleon.

We associate chameleons with transformation, in the first place. We even use to say for a person who is adaptive and who always finds a way to fit in or, on the opposite, to avoid something and disappear, he or she is ‘a chameleon’.

The most common symbolic meaning of a chameleon is transformation and it is always in strong connection with its ability to shift colors.

Being able to blend into their surroundings by changing colors of their skin, chameleons also represent disguise, adaptability and change. In symbolical sense, chameleons stand for making changes in order to adapt to our environment.

They teach us sometimes it is better to fit in than to stand out. Having in mind how unusual and eye-catching chameleons appear, the message is clear.

Chameleons represent adaptation and survival. These lizards are not only fancy-colored, but also very tough little fellows. They are not fragile and they could endure temperature extremes, the heat and the cold both.

Certain chameleon family representatives live in deserts, whet temperature drops from unbearable heat to freezing cold and they have no problems adjusting to such variations.

Patience, peace, relaxation and calmness also come to our minds speaking about chameleons. These lizards are predators, but they are not aggressive, bloodthirsty hunters.

No, they sit and wait for their prey and catch it with their fascinating tongue. Chameleons also love to spend hours in bright sunshine, so they remind us of enjoying sunbathing, being at peace with ourselves and the world around.

They embody the idea of patience and harmonious life.

If we think of Chameleon totem, we could say this is particularly rare one. Those who are guided by the Chameleon spirit are calm, peaceful and laid back personalities with amazing talents and skills. Chameleon totem teaches steadiness, tranquility and calmness.

Chameleon people rarely overreact to situations in life and they are capable of observing them from all sides and points of view.

Although the sometimes appear phlegmatic and indifferent, Chameleon people are actually very creative and thoughtful. They believe everything in life has its time and place. They never rush into making decisions and taking action, before they have at least a greater part sorted out.

Chameleon people are friendly, sociable and easy going. They are good to have around and, although usually quiet, even shy, Chameleon personalities always attract attention. They are creative and artistic. Others would describe them as unique and inspiring, but also dreamers and lost in thoughts.

Although chameleon people easily get along with others, they do not mind being alone, especially if they are working on a specific project.

They are dedicated to their work, which is, in the most cases, a creative type of engagement.

They are also adaptable to changes and they do not lose their temper over unexpected changes or plans that do not go the way they would like to. Chameleon persons do not have a plan B, but they have good intuition and instincts immediately to invent it.

They are self-reliable, intelligent and resourceful.

In addition, Chameleon people are helpful to others and they would always magically calm you down, if you are annoyed, stressed, worried or else.

They always have a good piece of advice, since they feel comfortable in their own skin and are able to see through many different situations in life. They are never easily disturbed, irritated or discouraged.

On a negative side, their calmness and relaxed approach to life could possibly make them lazy and slowly lead to total indifference. If you are a Chameleon type one, have this in mind and never let yourself relax too much. Being steady and calm is generally a good recipe for harmonious life, but it could also lead to missed opportunities and delayed progress.

Chameleon totem makes you feel positive, even if times are hard. It teaches you life is to be experienced and enjoyed, even if difficulties are likely to come your way, from time to time.

Keep your eyes wide open and do not miss great opportunities; you have good instincts to recognize them. Nurture your creative skills and do not let yourself become inactive.