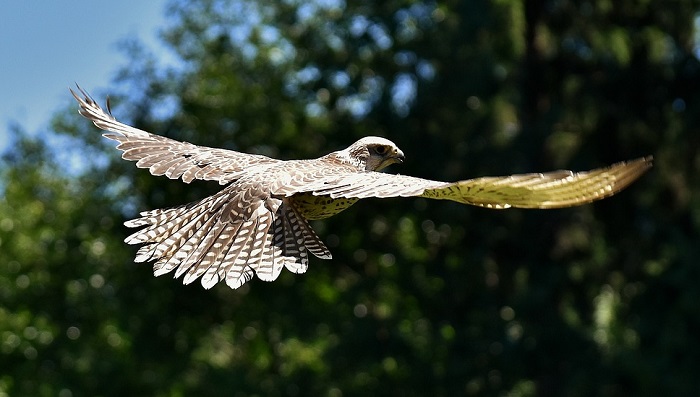 Magnificent and beautiful bird species have been an object of our adoration and worship for ages.

The very ability birds are given with, and that is, of course, the power of flying, seems so magnificent and incredible to us, common earthlings who roam around on their two legs, never capable of reaching the glorious heights by their own physical features and skills they are born with.

The elegant, majestic falcons have been one of the most powerful bird symbols since far past.

Falcons are truly amazing living creatures and they make us feel the power of nature in all its glory, by only looking how tranquilly they glide through the air. All of predator bird species have been inspiring to humans for ages.

We are somewhat envious of their ability to fly and reach heights we could only dream of. Today, we have various types of machines, designed to make us fly, but sure you get that it is not the same.

In old times, people had not have planes and other flying vehicles, so admiration and adoration of falcons and its relatives was even stronger.

Falcons have always been associated with royal power, freedom, independence and glory.

This mighty bird is to be found as a common heraldry motif.

Not only falcons were associated with power of those ‘chosen ones’, to say so, important personalities and concepts, such as kings, emperors, the state, the rule or glorious victory.

These mighty birds have also been identified with divine powers and deities.

In ancient times, falcon motifs were commonly used to represent certain deity or were thought to be an earthly incarnation of a god. Today, falcon motifs are still being widely used. 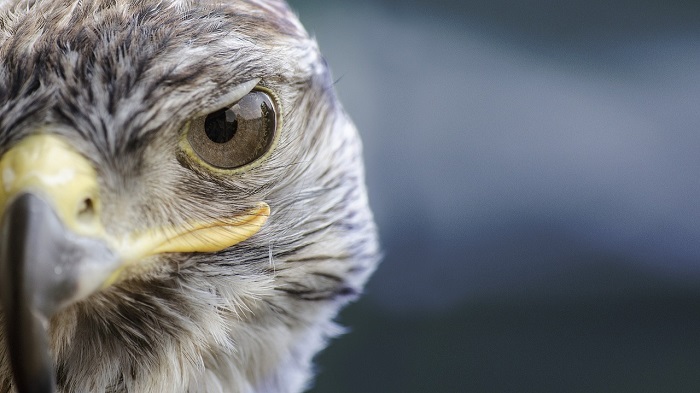 Falcons were adored and worshiped in Ancient Egypt, the land where all the animals inhabiting the area had been believed to possess certain mysterious powers. Like in all ancient societies, birds had a special symbolical place in Egypt.

Ancient Egyptians believed falcons are divine creatures, ones that possess special powers and they identified these birds with certain deities.

They believed a falcon could be an incarnation of a god. In Europe and Westerners’ countries in general, falcons have also been playing an important symbolic role.

Particularly, the peregrine falcon and certain other ideas are widely popular. Just as in Ancient Egypt, falcons have been believed to be divine and glorious birds in Western World’s traditions, since old days until modern era.

One of the most widely worshipped Ancient Egyptian gods, Horus, the sun deity, was always depicted as a man with a falcon’s head. Falcons in Egyptian art were associated with this deity.

Having in mind that Horus was much worshiped god, believed to be wise, glorious and noble, falcon pictograms were used to express some of the greatest qualities a human being could carry. A falcon hieroglyphic motif stands for nobility, glory and much more.

A falcon hieroglyph motif was often a part of hieroglyphic inscriptions that stand for a name of certain rulers, in words that represent a deity, the sun, the sky, stars, words related to the concept of time, a blessing and light.

You have certainly seen the Eye of Horus, which has a popular motif until the day, in modern times found in various types of designs.

The Eye of Horus is actually a stylized variation of a falcon’s eye. It represents wisdom, time, eternity and much more. Its symbolism has been widened, but the initial idea stays the same.

For Ancient Egyptians, falcons were divine birds, messengers of high heavens and their sun gods.

They have not only associated falcons with the mighty Horus, but also with another, perhaps even more important sun deity, the almighty Amon Ra himself. Amon Ra was the supreme sun god of Ancient Egypt and, just like Horus; he is also represented as a falcon-head man.

Pharaohs have also been in tight relation with falcon symbolism, because Egyptians believed their rulers are actually an earthly for of a deity.

They used falcon motifs symbolically to represent their royals, nobility, rule, leadership, godlike features of their kings. They have even associated a future king’s way to the throne with a falcon’s flight.

That is how strong symbolism of falcons was in Ancient Egypt.

These beautiful birds were also associated with certain gods, but Europeans also loved them for their incredible hunting skills.

Falconry was one of very popular practices around the old Europe. For most Europeans, falcons symbolize glory, freedom and royalty. Norse mythology is abundant in animal symbolism.

The goddess Freya, a Nordic deity of fertility and love, but also the one who guards the dead ones, has been identified with falcons.

According to Norse mythology, Freya would wear a falcons’ feathers cloak. This special clothing was magical and Freya used it safely and efficiently to travel between mythical worlds. Frey was also believed to be capable of shape shifting into a falcon.

One of the symbolically important species is the peregrine falcon. Peregrine meaning is especially important to Native American tribes of Mississippi. According to their beliefs, peregrine falcons are in close touch with realms beyond human reach; they communicate with magical spirits and they are magical themselves.

They believe peregrine falcons protect the people and are capable of traveling between realms.

They associate these birds with higher wisdom, the sun and the sky. For Native American tribes, peregrine falcons also represent power, glory and victory. They would perform ritual dances wearing falcons’ feathers, in order to attract fortune and positive outcomes.

Native American chieftains’ burial beds were often designed so to represent the shape of a falcon, which symbolically represent the power of the ruler, but also probably provides him a safe passage to another world.

In addition to all of these old falcon related beliefs and traditions, in the modern day United States, the specific expression featuring the term a falcon has been incented.

Strangely, but it is a negative one.

Blue falcon is a person, a soldier, in particular, who works against their colleagues and mates in order to get what they want. It is, actually, a term originating from American military slang.

Those ‘blue falcons’ are notorious, selfish and unscrupulous individuals who do not even care about getting a bad reputation.

Except for this strangely negative military slang idea of falcons, we have seen how much adored, admired and appreciated these majestic birds have been since ancient days. As we have seen, falcon symbolism is overall positive.

These beautiful flying predators represent some of the greatest qualities and ideas we, humans, can think of.

Spiritual power of falcons is enchanting and incredible, which makes this bird a powerful totem animal.

Falcons symbolize many positive things and idealistic tendencies. They represent the idea of glory, victory, success, power, independence and freedom.

Falcons are, although we have found a ways to tame them and use their hunting skills, independent creatures that roam the skies, reaching heights where the pure light shines. Falcons are, thus, commonly associated with the energy of sun and divine wisdom and light.

This incredible bird symbolizes not only power and glory, but also wisdom, higher thoughts, higher order of things, knowledge, spiritual journey, even the human soul.

For example, in Christianity, a wild falcon stands for sinful part of human soul, while a tame falcon represents the soul that is pure, trasnfigurated.

So, yes, there is a bit of a negative connotation, but we could also interpret it as, not sinful, but adventurous, which puts us at risk of being sinful in Christian terms. One of the most popular concepts associated with falcons are speed and hunting skills.

Symbolically, falcons represent far more than just a physical agility and speed. They symbolize the power of thoughts, the speed of our mind, the ability to think out of the box.

Falcons symbolize fortune, luck and victory. Since ancient times it has been believed falcons bring glory, success, victory and positive outcome. While in old times, these positive omens were closely related to matters of warfare, today falcons are still considered an auspicious sign.

Dreams about falcons are interpreted as particularly positive personal omens, for instance.

Falcons represent our soul and our spiritual journey. Since it is believed these mighty creatures have a magical ability to pass borders of our physical world and reach realms we could only imagine, falcons represent spiritual awakening, spirituality in general and our own soul.

Falcons also represent the connection between these imagined realms of divine forces and our world.

Overall, they are seen as mediators and those that carry positive messages from guarding and protective divine and celestial energies.

Since falcons’ symbolism is incredibly positive, it is easy to conclude that having this magnificent spirit animal to be your totem guide is a true blessing.

Falcon totem could teach you many things and help you become the best of yourself. Falcon totem offers guidance and protection in the purest form; it is a wise, caring and magnificent spiritual guide.

Those who are born under the totem of falcon are outstanding individuals with many talents and qualities.

Falcon people are noble, good-hearted, self-confident and brave. They are not only intelligent but also wise. They know that true mastery of life lies in careful thinking and using your gifts for good.

Falcon people are rarely wrong in distinguishing good from bad. They are not judging over others, but they always tend to improve their own behavior and put all things into consideration.

Falcon people are very independent, but they are always open to new ideas or advices from others.

These individuals are easy going and tolerable, but they would never let someone spoil their success or exploit their good intentions. Falcon people find it easy to help others, while, at the same time, they are not easily manipulated.

They rarely waste their energy on empty talk or arguments. If something goes wrong, they do not panic, but are trying to find a way to fix things.

These people are very courageous, but their nature is not risky. Falcon people are known to be loners, but not because they are shy or of a low self-esteem, but because they love to be on their own.

They are mentally and emotionally strong and not easily discouraged. They are known to be loyal friends and truly honest people.

They are straight to the point. Sometimes, people are shocked of how direct a Falcon person could be. However, these ones are also caring and very kind towards those they deeply love.

Falcon totem teaches you to be honest, just, truthful to yourself and loyal to people who put their trust in you.

Falcon people are reliable and supportive. Although they could spend long periods away from all eyes and seem literally to disappear, they will always be there if you need them.

These people have sharp mind, but they also master the art of patience. They like to have all thing sorted out carefully, although they are also not easily shaken if things go in a different direction.

They do not seek an argument and they are not aggressive, although they stand their ground if challenged or provoked.

They are, perhaps, some of the strongest and the most positive characters. They have both good perception and intuition, so they easily get along with the world and the people.