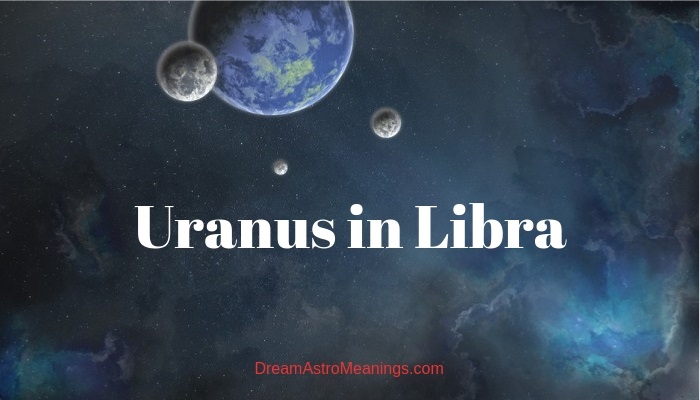 Uranus is the fourth heaviest planet in the Solar system. This planet is also the coldest off all the planets in our Solar system, with a temperature of -224°C. It is compose mostly of rocks and ice, and its exterior is made of clouds layers. Uranus has 27 moons.

The name Uranus comes from the Greek god Uranus, which was the god of the skies. He was the father of the god Cronus and grandfather of the god Zeus. It is known as one of the first Greek deities. Uranus was the husband of Gaia, Mother Earth, which in some sources was considered his mother as well. These two were the parents of the Titans and Cyclops.

Astrologically, Uranus is the ruler of sudden, unexpected events and circumstances which transform our lives. These events are usually triggered by some major aspects in progressions and/or transits to Uranus.

Uranus is a bringer of lessons to one’s life, but it tends to teach in sometimes a cruel way. Its lessons appear usually when a person denies the need to change or refuses to adapt to changes.

Uranus is the planet of geniuses, originality, creativity, innovations, discoveries, and all new things which benefit the masses. This planet indicates breaking up with the past and introducing the new. It clears the past so new things could come into our lives although when bad things happen we might not see it that way. It is often the announcer of change and new beginnings.

This planet is the ruler of flying, aviation, and everything to do with it. It rules pilots, cars buses, trains, motorcycles, bicycles, and other means of transport. It also rules the drivers of these vehicles.

This planet rules travel and all travelers. It is all about experiencing new things and exploring the unknown. People who are under the influence of Uranus are prone to extreme activities and sports. This planet rules sports, sportsmen, sports activities, clubs, and stadiums.

Uranus is the ruler of authorities, tyrants, despots, bossy people, and other similar figures. It also rules rebellion against oppression, revolutions, protests, demonstrations, boycotts, and similar activities where people express their dissatisfaction with someone’s actions and demand things to change.

This planet is the ruler of all rebellious people, anarchists, revolutionaries, fanatics, as well as reformers. It indicates impulsive behavior and lack of control. It is the symbol of assassinations, bomb attacks, and similar activities of such people.

Uranus rules astrology and astrologers, psychics and psychic experiences, telepathy and telepathic experiences. It is the ruler of healing, psychotherapy and psychoanalysis. It rules gains from giving services related to these areas. It rules the nerves and our nervous system, as well as all disorders related to our nervous system. It is also the ruler of astronomers and astronomy.

This planet rules unpredictable and usually very unpleasant events, such as bankruptcy and money loss. Other destructive circumstances and events are also under the rulership of this planet, such as volcano eruptions, earthquakes, and other mass catastrophes.

It rules accidents with a deadly outcome. Uranus is the ruler of destructiveness, destroyers, and destructive behavior in general.

This planet’s influence could cause relationship break-ups and divorces. Uranus is the planet of separations. The endings of relationships often come as a result of infidelity from one or both partners. Uranus rules infidelity as well.

Uranus rules extremes of all kinds, whether good or bad. It rules unpredictable and eccentric people whose reactions can never be assumed. Uranus also rules freedom and desire for freedom. People with a strong influence of Uranus love their freedom very much and don’t easily give up on it.

It is the ruler of movies and cinemas, photographers and photography, radiology, post offices and post officers, radios, television, telephones, broadcasting, announcers, etc.

The planet Uranus is responsible for the civilizational transformation and the development of society and individuals as part of that society. It has an influence on the collective conscious. That is why it is one of the transpersonal planets, besides Pluto and Neptune.

This planet needs around seven years to go through a sign. Its placement in a sign isn’t of much influence to individuals and affects whole generations of people born during that time.

To determine the influence of Uranus on an individual, it is important to consider the sign, the placement in a natal chart, as well as all the aspects it is making with other planets in the natal chart of a person.

People are usually not aware of this influence because it is a subconscious one. If transiting or progressed Uranus is making significant aspects to a person’s natal positions this might manifest itself as a set of transforming unexpected events which might occur in a person’s life.

Uranus influences people who have a prominent Uranus in their natal chart. Others might not be as sensitive to its transits and progressions and they might often pass without anything of importance happening in a person’s life.

Uranus in good aspects to other planets of the chart brings favorable abrupt changes, while badly positioned Uranus could bring some dramatic and unpleasant events which could shake a person’s life to the core.

In the article we are talking about the characteristics of people with Uranus in Libra.

Men born with Uranus in Libra usually have balanced and harmonious personalities.

They are also gifted actors and musicians, and these are also areas where they introduce some of their innovations and unique ways of doing these professions. They are successful lawyers and judges as well.

These men (like women with this placement) are very righteous and strive towards justice for all people. They consider all people their equal, and are very adaptable to the company of different kinds of people.

These men are very communicative and sociable and have a large circle of friends and acquaintances.

Women with Uranus in Libra are beauty lovers and creators.

Like men with this placement, these women are in love with beauty and love to be surrounded by it.

They are often talented artists with a great personal style. These women have a mild nature and kind heart and are ready to help anyone who needs their help.

They require harmony and balance to be able to function properly. They feel best when they are in a relationship with someone.

Unfortunately, this placement of Uranus often causes relationship and marriage issues, which later cause break-ups and divorces.

These women are often involved in some organized fight for human rights and often in pursuit of fulfilling some humanitarian goal.

Some bad traits of people with Uranus in Libra are: relationship issues, divorces, break-ups, separations, etc.

When Uranus transits the sign of Libra, this sign adds its traits to the overall Uranus symbolism.

It is also the sign which rules interior and exterior design and decorations, jewelry, jewelers, cosmetic salons, boutiques, fashion, luxury and luxury items and lifestyle,

When Uranus is in the sign of Libra it usually influences the generations born within this reign to strive towards harmony and balance in all aspects of their life, especially in their relationships.

This placement could create love for the unconventional type of relationships but still with a sense of tranquility and balance.

This placement often brings innovations in the field of arts, music, lifestyle, fashion, literature, personal style, etc. It might create a new way of looking at beauty in people as well as objects of beauty.

People with this placement are very righteous and often fight for some humanitarian cause and the rights of people. These people often have relationship or marriage issues which end in break-ups or divorces.

This might be caused by the infidelity of the partners or simply their need for freedom without any kind of restrictions. This placement often indicates open kind of relationships, change of partners, or some other eccentric relationship behavior.

This placement might also cause major changes in the areas of law and relationships. It might mark the separation from traditional beliefs and ways of doing things in these areas.

People with Uranus in Libra are usually fighters for a common cause. They often pursue a goal which will benefit a lot of people. These people fight for justice and freedom of all people. They are always ready to help the ones in need and are very compassionate.

They are often talented and creative artists, which always try to insert some unique touch and part of their own individuality in the works they produce. These people have an excellent sense of beauty and know how to appreciate it in the most original ways.

They can be idealists who see the world through rose-colored glasses, believing in the kindness and good intentions of all people. They get disappointed when they realize the truth, but they fight against injustice in every way possible.

These people are usually very adaptable and don’t have a problem to get along with different kinds of people. They are very sociable and communicative and love to be around people.

They are tolerant of other people’s opinions and accept all people equally regardless of their differences. They are also very cooperative and prone to making compromises.

The main ideals these people have are: equality, altruism, harmony, cooperation, justice, generosity, humanitarianism, etc. They give their best to participate in the process of establishing these ideals as standards in the society.

These people are the relationship kind, although they often experience break-ups and separations due to infidelity or freedom issues of one or both partners.

Uranus is a so-called transpersonal planet. That means that it influences generations of people born during its transit through one sign.

It takes seven years for Uranus to go through a sign. Its influence cannot easily be sensed because it is subconscious and triggers the collective rather than the individual.

To determine Uranus influence on a person, besides the sign, we should consult its placement in a house of the natal chart, as well as its aspects to other planets. It is also important to consult the transits and progressions at that moment.

An important note is that Uranus has the strongest influence on people who already have a prominent Uranus in their natal charts.

People who have Uranus in the sign of Libra are justice seekers and fighters for human rights. These people strive towards harmony and balance, which are their ideal states.

These people are very generous and kindhearted. They fight for human rights and equality of all people.

For them all people are the same, regardless of any differences between them.

They are very adaptable and able to enjoy the company of different people even complete strangers. They are very sociable and always surrounded by friends and acquaintances.