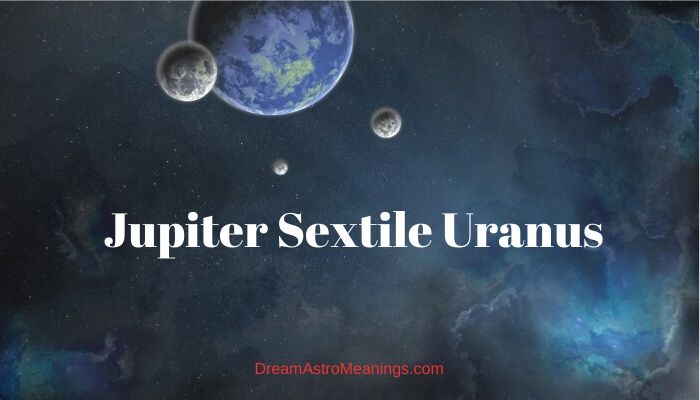 Since ancient times, astrology analyses have been used to determine the destiny and personal traits of different individuals.

People realized long time ago that the planets and their movement through signs have a strong influence on people and their lives.

Astrology is a practice of analyzing the planetary placements in the time of person’s birth and their possible influence on that person.

Planets in the natal chart, their signs, and placement in the houses, as well as the relationships with other planets in the chart, can tell much about the person’s character and the possible events they might encounter during their lifetime.

The aspects or relationships between planets have a lot to say about a person and the likely events they could experience. They form when the planets are at a certain distance from each other forming a certain degree, like 0°, 180°, 90°, etc.

There are major and minor aspects and they could have beneficial or malefic influence.

Major aspects are more influential than minor, but even minor ones can have a strong influence if they are exact. The more exact the aspect, the stronger the influence is.

Sextiles are major aspects considered harmonious. They have similar influence to trines. Sextile is created when two planets form an angle of 60 degrees. The orb for this aspect is 5 degrees (the distance between planets can be 55 to 65 degrees).

The sextile aspect enables the cooperation between the planets and allows their energy to flow freely. Planets connected with the sextile aspect are able to show their true potential and give their best traits to the person.

Unlike harmonious aspects, unharmonious ones tend to block the energy of the planets, and create obstacles on the person’s path.

Sextiles are formed between signs belonging to complementary elements, like air and fire, and water and earth.

They create a balanced energy between the planets of which the person can benefit from. They give the person their skills and talents, and help their development and usage.

That usually happens during significant progressions and transits that trigger this aspect.

Sextiles are very beneficial aspects because they bring wonderful opportunities into the person’s life. Sextiles clear the path for the person to fulfill their desires, bringing fortunate circumstances and encounters with significant people that help the person reach their goals.

They can sometimes produce negative effects on the person making them lazy, unambitious, and lacking energy and drive because they are used to things coming to them without effort.

They begin missing important opportunities knowing that new ones will come soon, but that often causes them to waste time and their talents.

Many people with a lot of beneficial aspects like trines and sextiles don’t use their potential fully because they lack ambition and drive to succeed.

Unlike them, people with predominately bad aspects have a strong desire to succeed and they pursue their opportunities instead of missing them. These people often succeed more in life.

These chances enable the person fulfill their goals or develop some talents and skills. These aspects often bring significant people into peoples’ lives that help them accomplish some desires or use their talents.

Jupiter is known as the biggest planet in the Solar system. Jupiter is mostly hydrogen and lacks solid surface.

The name Jupiter is the name of the Roman god of war and sky, the greatest deity in the Roman god pantheon. He was considered the king of all gods, and he remained on that throne until the rise of Christianity.

Jupiter is considered the most fortunate of all planets. It brings good fortune and wealth if well-placed in the natal chart. Even if this planet doesn’t have beneficial aspects, it rarely brings bad things into the person’s life.

If Jupiter has harmonious aspects with other planets, especially personal planets, this planet could bring fortunate circumstances into the person’s life enabling them to gain significant wealth and achieve their goals and desires.

This planet is the ruler of joy and optimism. It rules Sagittarius and co-rules Neptune. Its exaltation is in Cancer. When Jupiter is in these signs, it has the most power and can express its best qualities. Jupiter is in fall in Capricorn and this placement lowers its power.

When Jupiter is well placed in someone’s natal chart, that gives this person the opportunity for great achievements and a life filled with joy and financial stability. Jupiter protects from harm and gives the person assistance in times of difficulty.

In bad aspects Jupiter usually blocks the flow of energy and creates lack of opportunities and sometimes financial losses and problems in establishing financial security. In such cases, people often struggle to make money.

That means that larger groups of people will have the same planet in the same sign and share its traits.

When analyzing the placement of Jupiter in an individual’s chart it is important to consider the sign, house, and the aspects Jupiter is making with other planets.

Uranus is similar to Neptune because it is composed mostly of ice and is very cold. Uranus is the coldest in the Solar system, with temperatures reaching -224 degrees.

On the outside, it is made of layers of clouds, and the interior is mostly rocks and ice. Uranus has rings and 27 moons.

Uranus is the Greek god of sky. He was the father of Cronus and grandfather of Zeus. Uranus is one of the first gods in ancient Greece.

When Uranus is in challenging aspects Uranus can bring negative events into the person’s life.

Uranus has a powerful transformative influence on the society and brings massive changes in humanity consciousness and society as a whole. Uranus rules great discoveries, which especially happen during important transits involving this planet.

The influence of Uranus, which is a generational planet, can be determined through analyzing the sign and house where this planet is placed as well as the aspect Uranus is making with other planets in this natal chart.

Progressions and transits of Uranus often initiate major events of Uranus nature which have a transformational role and bring changes into the person’s life.

In case of bad aspects, this planet could be the cause of disappointment and misfortune.

The sextile aspect between Jupiter and Uranus is shared by many people because these planets tend to spend long time in one sign and even in the same degree.

This aspect will mostly be felt by people who have Jupiter and/or Uranus as their ruling planets, or some of them placed in a significant point in the natal chart, like ASC/DSC or MC/IC axis.

This aspect gives the person love for freedom and adventure. They love exploring places and going where not many people have been. They are often into sports usually extreme kind of sports where their need for adrenaline rush can be fulfilled.

People with this aspect often have good fortune, especially when it comes to games of chance. These people are usually very creative with sudden urges of inspiration for their works. They strive for excitement and look for activities which can satisfy this need.

A person with Jupiter sextile Uranus is usually optimistic and confident. They want to have the best in life and they are not afraid to go after it.

Good things come to them without much effort and often unexpectedly. They often have lucky encounters with people that could help them fulfill their desires.

These people are usually sociable and have a large circle of friends and acquaintances. They often attract people with similar interests for adventure and various experiences.

They are usually blessed with unexpected chances to develop their skills and talents and acquire their desired outcome. They often chose professions which enable them to have a lot of free time for their leisure activities. These people often set the trends others will follow.

They are not traditional and have an open approach to situations and people. They are always ready to help and offer selflessly their services. They often have an unusual approach to religion and fate.

These people often have a problem with details and are better at getting ideas than with realizing them into reality.

Many of them get bored easily and they need to have a constant boost of inspiring new things they could deal with. They are often the carriers of ideas for social change which others tend to follow.

The sextile transit between Jupiter and Uranus often creates new opportunities to make the needed and desired changes in life.

This is often the moment to go on that long desired journey to some exotic country and experience different cultures.

This aspect inspires you to make improvements in your life. You might not have planned it but unexpectedly you might get an idea to make some changes in your lifestyle.

During this transit people often experience a strong desire for independence and freedom, especially the ones who for some reason feel restricted in their lives, either by circumstances or by the people from their close surroundings.

Sometimes people get creative ideas to solve their problems during this transit. Creativity is heightened these days. Often people begin studying some interesting subject that they have always wanted to study.

For some people, this transit might mark a period when it is wise to make some risky investments because it is likely that they will pay off.

People usually feel more optimistic and joyful during this transit, and are filled with positive expectations about their future. The influence of this transit often erases negative thoughts and replaces them with optimism.