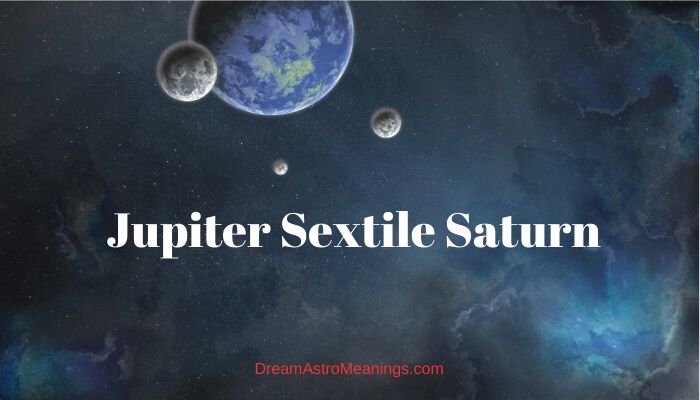 The origins of analyzing planetary movement and determining the meaning of the relationships between different planets they make while they move across the sky are very old.

The discipline which aims to determine personality traits or future events by deciphering the placements of planets in different signs as well as the aspects they form.

Aspects represent relationships between planets formed during planetary movements and in the natal chart they are aspects between planets in the exact moment of birth. The aspects have a strong influence on the person’s character and their life events.

The main or major aspects are the Sextile, Conjunction, Trine, Square, and Opposition.

The Sextile is a beneficial aspect. This is an aspect similar to the Trine, only Trine is considered more fortunate. This aspect enables the planets to express their nature openly and is not blocking their energy like negative aspects can do.

The Sextile enables the planets to cooperate and allow the person to make the most of their best traits.

The Sextile aspect is formed when two planets find themselves at a distance of 60° apart from one another. The orb for this aspect is around 5° which means that it tolerates a distance of 55°- 65°.

Sextiles are naturally formed between complementary signs, like air and fire, and earth and water. They create the person’s talents and skills, which are usually related to areas ruled by the signs and the houses where the planets are placed.

Because it represents an easy flowing energy, and opportunities, this aspect can make the person unambitious and lazy.

Opportunities come to them usually without much effort and they often miss them expecting another one to come.

With such an attitude these people are wasting their time and they often don’t manage to use their full potential, unlike people with challenging aspects which are used to fight for everything they want.

A person with many Sextile aspects in their natal chart should be aware not to allow themselves to miss important opportunities and chances in life and become completely inactive because things often seem to fall into their lap.

Sextile activated by transits and progressions brings new fortunate opportunities into the person’s life, for growth and development of their talents.

This period often indicates a time when some people might enter the person’s life which could help them accomplish some goals in an easy way.

Jupiter is the biggest known planet in the Solar system. It consists mostly of hydrogen and doesn’t have a solid surface. The name of this planet comes from the name of the Roman god of sky and war, Jupiter.

He was the greatest deity in the Roman god pantheon and was considered the king of the gods until Christianity replaced old pagan beliefs and deities.

Since ancient times, Jupiter was considered a very fortunate planet, bringer of wealth and fortune. It was called the “great benefic” among the planets. A well placed Jupiter in the natal chart in harmonious aspects with other planets was considered a sign of good luck and guaranteed wealth for the person during their lifetime.

Jupiter is the planet of optimism and joy. It rules the sign of Sagittarius and is exalted in the sign of Cancer. Placed in these signs, Jupiter has a great power and its best traits can come to surface.

Of course, it is important that Jupiter is not badly placed and aspected in the natal chart.

In the sign of Capricorn, it is in its fall and that lowers the power and energy of this planet. A well placed Jupiter in the natal chart gives the person opportunities for progress and great achievements, as well as financial stability.

It protects the person from harm, especially in financial affairs.

If Jupiter is in bad aspects to natal planets, this could create lack of fortunate opportunities, financial losses, and obstacles in creating financial stability. These people usually struggle more to make money.

Jupiter is a social planet, unlike the personal planets Mars, Venus, Moon, Sun, and Mercury.

These planets have influence over generations because they spend more time transiting a sign than the personal planets which is why many people born during this time span to have the same planet in the same sign, sharing its traits.

The influence should always be determined individually, observing the person’s natal chart and its planetary placements.

Like Jupiter, Saturn is also a large planet, and is the second-largest in the Solar system, after Jupiter. Saturn has a ring system which is composed of ice particles, rocky debris and dust.

At least 82 known moons orbit this planet, with Titan as its largest moon (larger than the planet Mercury). Its composition is mostly helium and hydrogen and it lacks solid surface.

Saturn orbits the Sun during a period of 29.5 years, and it spends around 2.5 years in each Zodiac sign. Its name comes from the name of the Roman god of crops, harvest, seeds, wealth, social order and conformity. Saturn was an important deity in the Roman pantheon.

The planet Saturn rules the sing of Capricorn and co-rules Aquarius. Saturn is exalted in the sign of Libra.

It symbolizes stamina, determination, and endurance while accomplishing goals.

The time when Saturn returns to its natal position at around 29.5 years represents a period when the person evaluates their achievements and determines the satisfaction with what they have achieved so far.

Significant transits involving Saturn bring events with major life lessons that the person needs to learn in their lifetime.

People with Jupiter Sextile Saturn usually have a balanced and organized nature. They are optimists with a steady and determined approach towards achieving their goals, mainly regarding their financial security and future.

They are optimists, but they are also cautious and don’t allow themselves to carelessly rush into action. They carefully make plans of their actions and usually play it safe.

These people know what their limitations are and they don’t want to ruin their work by not planning all their steps.

These people are loyal to their loved ones. They have a measured behavior and they respect people’s boundaries. They are interesting and fun to be around.

These people love traveling, and they usually travel for fun but also to learn new things and meet new cultures. They can be art and history lovers and they often use their travels to enrich their experience with seeing in person the things they only know in theory or from pictures and books.

People with Jupiter Sextile Saturn enjoy expanding their knowledge in any possible way.

They usually have University education and they are always looking for ways to increase their amount of knowledge and develop themselves. They have the intellectual capacity, determination and persistence required for serious studies.

They can be considered very serious and responsible by people who don’t know them well, but these people do know how to have fun and relax when there is time for that.

When things need to be done they know what their priorities are and they don’t let anything stand in their way of doing their tasks on time and correctly.

They are patient and don’t get easily discouraged if things don’t go as they planned. This aspect usually doesn’t create obstacles but it can indicate delays in accomplishment.

These people usually don’t miss their chances because of their natural sense of responsibility. They usually use the ones where they estimate they have a good chance of succeeding.

These people have strong willpower and are not afraid of hard work. They don’t have a problem doing routine jobs, but they prefer more interesting and creative working tasks.

They are often in leadership positions, and the areas of greatest interest are business, and law, and sometimes politics. They have great judgment and organizational skills which ensure their success and movement forward up the success ladder.

People with this aspect are better at doing their job individually than working in a team. They want their efforts to be recognized by their superiors and are usually very ambitious.

These traits usually ensure their success and high position. They are often self-employed or have their own business.

In many cases, these people are interested in a career related to real-estate, or their wealth might consist of real-estate.

Transiting Sextile aspect between Jupiter and Saturn could bring some good opportunities for growth and steady progress; these might be excellent opportunities which don’t seem like that at a first glance.

It is important to give these opportunities a chance and try to make the most of them because they might turn out to be very profitable and significantly increase the person’s wealth.

The opportunities that might arise are usually related to career and/or business. They might also be related to investing money in real-estate and other Jupiter/Saturn related areas.

In some cases, this transit might announce some significant material gains and the stabilization of the person’s financial situation for a longer period.

This transit might announce the need for patience and perseverance in some current circumstances or while waiting some effort to start paying off.

Maybe you are working on a long-term project and you are approaching its finish. You will soon be reaping the rewards for your patience and determination.

In some cases, this transit might be a sign of promotion or a pay rise as a reward for your loyalty and work initiative.

For some, this transit will indicate financial investments that will be profitable.