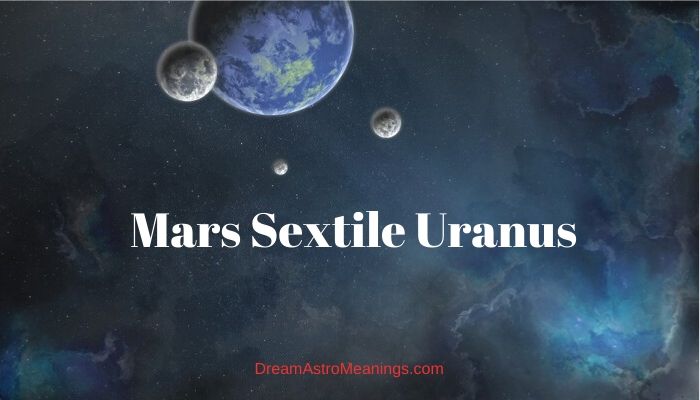 Analyzing planetary movements and the influence of planets on human life is almost as old as human kind is.

Astrology is an ancient discipline which determines the meanings of planets placed in different signs of the Zodiac as well as their influence on our lives.

The planets have a strong impact on forming our character as well as the experiences we are likely to encounter in our life. Aspects between planets play a very important role in this.

The aspects can be major and minor, and they could have a beneficial or malefic influence. The major or main aspects are conjunction, sextile, trine, opposition, and square.

When the aspect is exact, it has the strongest power and influence. The exact aspects will be the most prominent in the forming of the person’s character as well as initiating the most important events in their life.

Sextiles are beneficial or harmonious aspects. They have many similarities to trines, except that trines are considered more fortunate.

Sextile enables the planets to openly express their true nature and cooperate. Unlike negative aspects, they don’t block the energy of the planets. Sextile is an aspect formed when the planets are at a distance of 60 degrees.

The orb for sextile is 5 degrees which means that the aspect is active when the planets are at a distance of 55 to 65 degrees.

Sextile is an aspect between signs in complementary elements, such as water and earth and air and fire. This beneficial aspect forms the person’s talents and skills in the areas ruled by the signs and houses where the planets are.

Sextiles create a lot of opportunities for the person to fulfill their goals and dreams and can often be counterproductive causing laziness, procrastination, loss of ambition and initiative.

The person is confident that opportunities will arise and they begin missing them and wasting their talents.

People who have lot of sextiles in their natal chart usually don’t have problems with finding opportunities to fulfill their goals.

They don’t put in much effort into achieving their desires. They don’t encounter obstacles as much as people with predominantly challenging aspects.

These are the main reasons why oftentimes these people don’t manage to use their full potential and end up wasting their talents.

Mars is sometimes called the “Red Planet” and the main reason for that is the red iron oxide covering its surface which causes Mars to appear red.

Mars is not a large planet; in fact, it is the second smallest, after Mercury as the smallest. It is similar to our planet and many people believe that life will be possible on Mars in not so distant future.

Some people also believe that life on Mars was present in the past and that life on Earth might originate from this planet.

Mars is the name of the god of war in ancient Rome. In astrology, Mars is the ruler of destruction, war, conflicts, wounds, illness, disasters, blood, etc.

Mars is a powerful planet that rules the signs Scorpio and Aries. In these signs, Mars has the strongest influence. It is exalted in Capricorn and there it exhibits its good traits as well. It takes Mars around two months to go through a sign when it is in a direct motion.

People influenced by Mars can have aggressive and impatient nature.

They can have rude behavior and provoke others. They want to be first in everything and have a competitive nature. They have dominant character prone to controlling others.

Uranus is a cold planet, with similar composition to the planet Neptune. It is made mostly of ice and is the coldest planet in our Solar system.

Uranus’s temperature reaches -224 degrees. It is made out of layers of clouds, and the interior is mostly ice and rocks. Uranus has rings and 27 moons.

The name derives from the name of the god of the sky in ancient Greece. Uranus was Zeus’s grandfather and Cronus’s father.

In astrology, Uranus is most known for its unpredictable nature and destructiveness. Uranus destroys to make place for new things to come.

It symbolizes change and transformation, and sudden events that completely transform the person.

When Uranus is making challenging aspects in the person’s chart, its influence can be extremely negative and bring misfortune and disappointments into the person’s life.

Uranus ruled people are revolutionaries, people who initiate changes in the society and are inspired to break the rules. These people love their freedom and independence and fight everyone who tries to restrict them.

People under the influence of Uranus often have the need to oppose authority. In challenging aspects, Uranus can be responsible for money loss, bankruptcy, accidents, sudden negative events, etc.

Uranus in challenging aspects to personal planets can be responsible for relationship breakups and conflicts which lead to breakups. Uranus is the planet ruler of endings and new beginnings, and changes that come as a result.

Because it is a generational planet Uranus’s influence on an individual should be observed as a combination of sign, house placement and relationships with other planets in the natal chart.

Progressions and transits affecting Uranus are responsible for major transformational events in the person’s life.

These bring events of Uranus nature that might change the person forever. If the aspects are negative in nature they could cause great disappointments and misfortune.

Mars sextile Uranus in the natal chart is an aspect that gives the person incredible energy and adventurous spirit. These people could be adrenaline addicts, enjoying all kinds of extreme activities and sports.

People are inspired by their energy and their initiative. They cannot be still and they always seek some kind of action.

Unlike people with challenging aspects of Mars and Uranus in their natal charts, these people can make a compromise and are not so stubborn and hot-headed when it comes to making decisions.

They have a strong intuition and they are used to following their gut when they need to make some important decisions. They are fast thinkers and they don’t take a lot of time to decide what to do, relying on their strong intuition.

These people have a powerful energy and drive. They are the energy force of every group and they don’t give up easily. They put in all their energy and effort when they want something finished.

They seek freedom and independence in their relationships and they cannot stand people who are possessive and trying to repress them in any way.

This is not a conflicting aspect, and even though both Mars and Uranus are very energetic and aggressive planets, this aspect helps the person control their urges and find the best way to get what they desire without offending anyone or getting into conflicts.

Sometimes they could possess eccentric attitude and interests and people might consider them a bit extreme. They might appear irritating to some people who do not share similar beliefs and have a more calm and conservative approach to life in general.

These people are often the ones who introduce changes in society. They tend to look into the future and use their creative skills to make innovations in the way things are regularly done.

They don’t like to be stagnant and repetitive situations get them bored easily. They need changes in every aspect of their lives and they often make them. They don’t make reckless changes and they tend to consider all facts before making them.

They possess a strong magnetism and people find them very attractive. These people often get many admirers and they don’t have a problem to find a romantic partner.

They are very smart and their brains process information fast. They often introduce new ways of thinking and seeing things.

These people are usually very curious and innovative and can be very successful inventors, especially in the fields of electricity and mechanics.

These people might experience circumstances that might suddenly change their lives and change their direction. With this aspect unpredictability of character as well as destiny is often present.

Transiting Mars in sextile with Uranus is an aspect that usually awakens a desire for adventure and excitement.

You could expect no obstacles during this period, which is a great time to begin making some long awaited changes.

This transit indicates heightened energy and inspiration and it is an excellent time to begin finishing some tasks you have been postponing. Because you are so full of energy it is likely that you will finish them in half amount of time you would regularly need.

During this transit you might appear especially attractive and there is a high chance you could begin a passionate relationship with someone who possesses similar traits. It is possible to enter impulsively into a relationship without getting to know the person well.

During this transit it is likely to feel a strong urge for independence and freedom, and it might indicate finally releasing yourself from some life restrictions that have been blocking you for a long time.