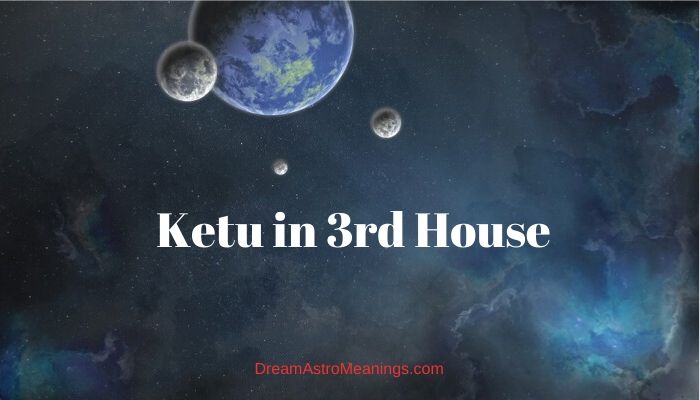 Jyotish or Vedic astrology considers Rahu and Ketu, the Lunar Nodes, more important than any of planets was.

Jyotish, which could be translated as the divine light, is something of life guidance; it is a path to harmony with the universe. Its primary goal is to help us perceive our entirety within this life, our dharma.

The secondary goal is to reveal our presence, past and future and our true, natural strength that would lead us to the enlightenment.

Although in Vedic astrology everything seems predisposed, most of the authors agree that we affect our destiny, through the power of our free will.

Jyotish can ‘see’ what we should do to improve ourselves and reach higher levels of being.

Let us see how knowing Lunar Nodes could help us on our road to light.

The North and the South Node, Rahu and Ketu are not planets, but points in the astrological chart. They, in fact, represent points of intersection of celestial paths of the Sun and the Moon.

In Vedic astrology, these points are considered far more powerful than planets. They have much to do with our karma. In simplified terms, Rahu and Ketu are our karmic mission.

Rahu is the head, the Dragon’s head, from a Hindu myth; Ketu is the Dragon’s tail. The North Node is associated with harmony, elementary balance.

It indicates karmic lessons we should absorb and accept. However, it also indicates bad reputation, over-thinking and so on. Ketu is what we should overcome, the past transferred into our current life.

The Hindu myth tells about the Snake king, the demoniac dragon who has stolen the elixir of immortality from gods. The Creator cut him into halves, but, being already immortal, the dragon remained alive.

His two halves exist separately, as Rahu and Ketu, the head and the tail. They chase the Sun and the Moon, to devour them as an act of revenge. The process could be seen for real, it is not a myth, it is called the eclipse.

Ketu or the South Node represent human past. More precisely, it represents a mixture of previous incarnations’ experiences.

This astrological point represents something we have already experienced and things that we pile up and carry as a bag of experiences and habits throughout our incarnations.

This bag could be heavy and ready to empty it; Ketu indicates all habits and behaviors we should let go of. It represents our weaknesses.

The thing with this karmic experience is that habits from previous incarnations are not suitable for the current one; we have to overcome them.

It certainly has happened that you choose to do something by inertia. You are used to it and why would you change it?Well, many times we do things we know how to do, even if those bring us disaster. Habits and comfort zone are not always the key.

This is more or less what our Ketu in a natal chart represents. There is more to it. It also stands for our ancestry, our inherited skills and talents, good things. The nature of Ketu is both good and bad, if you wish.

Lunar Nodes in Houses tell a lot about our karmic experience within certain areas of life. Let us find out what does Ketu in the Third House mean.

The third astrological house is a cadent and an Air house, analog with the sign of Gemini.

This is the house of communication, verbal expression, and style of conversation, the way of thinking, intellect, learning and knowledge, the attitude towards the latter, short trips, transport, connections and relations with many people. It has much to do with our relations with brothers and sisters.

The Third House is about both verbal and non-verbal communication and about acquiring and sharing information.

Reading this house, one could tell if the person has a potential of making bonds with influential people, whether the person would achieve a good level of mutual understanding with others, would he or she be able to express their ideas clearly and soon.

This astrological house also has to do with resourcefulness and the efficiency in resolving different situations. The third House is associated with analytics and the perception of the surroundings.

It is very interesting to look into how the house itself ‘communicates’ with the rest of a natal chart. We shall see how the South Node, Ketu, affects this field.

Ketu in the Third House – Ketu in 3d House

In previous incarnations, the native has generated as deep need to be in contact with people, which makes him or her vulnerable.

Regardless of how much the native thinks about good sides of being on their own, he or she constantly feels in need of others. Each relationship, romantic one, easily becomes complicated, so the native has to invest all of the energy in order to break away from it.

This person is always around others, listening to their problems. The individual likes the position of an advisor.

However, he or she often feels frustrated in face of too many problems that are to be experienced. The native secretly believes that he or she would have dealt with the issues more effectively, if they had more knowledge and education.

Third House Ketu individual wants to be as much of a diplomat as possible; the native retroactively thinks about words he or she has already said to others.

This person is conscious of every word spoken, far more than necessary. This leads to insecurity and the fear of being misunderstood.  As a result, the individual returns to conversations he or she had a day ago (or some time), in order to explain what they thought to say.

The native has a problem with understanding the essence of the truth; he or she feels obliged to cover up the true, which happens when the native tries to pass it on to others.

The problem is the complexity of the conversation the native leads, the complicating manner of speech. The greatest problem is the inability to deal with the karmic inheritance of the insatiate curiosity.

In previous incarnations, it was a good and a useful thing that would lead to more knowledge and expansion of views. In the current one, however, it leads the native off track, drowning in too many unnecessary details that make everything blurred, chaotic and hard to explain and understand.

The problem is that, when faced with the situation which requires making a concrete decision, the native searches for as many facts as possible, including many details, in hope that, if knowing the situation from all angles and corners, making a decision would be a piece of cake. Well, exactly the opposite happens.

The native strives for being impossibly neutral and objective, becoming paradoxical.

In previous incarnations, this person enjoys reading and exploring the world. The universe represents a source of inspiration and curiosity, awakening lust for knowledge. The native believes that the life goes on forever and that it is meant to be explored.

This person could become a dedicated explorer and a scholar of one particular subject; if the South Node is in a fixed sign, it is very likely that the native would find a study subject for life.

The native enjoys feeling cosmopolitan. This makes the person courageous and daring. He or she would do things many would never think of, all in order to gain more knowledge, more details, more experience of this life; more understanding.

This leads to a particular type of vulnerability; the native cannot keep up with everyone. Broken relationships and connection hurt.

Ketu in the Third House – Omnipresence

This person strives for being everything to everyone; a very self-demanding cause. The problem is that the native often dwells within the ‘lower consciousness’, which is a habit from previous incarnations. He o9r she moves around much more than needed; if not physically, then mentally.

The palette of opportunities this native finds or invents is so diverse that the person often exhausts him or herself only by thinking about them and about what to choose.

At the end of the day, it leads to doing nothing at all. This is a root cause of great insecurity reflecting on different plans. The native often worries about their sensuality and their intimate potentials.

This leads to promiscuous behaviors, needed as a confirmation that everything was perfectly fine. Such behaviors are meant to relieve the mental tension, too much thinking and worrying; this native is not particularly ‘wild’, in nature.

Let us give you an illustration of this behavior. This native is like a boy whose mates accused him of being a ‘nerd’, so the kid turns to completely opposite activities of those he generally enjoys, only to prove that he was not a ‘nerd’.

However, the insatiate need for knowledge and for being omnipresent with all of that knowledge prevails. This person wants to be a walking encyclopedia, fit to find the right information in every moment.

This native has to find a way to let go of triviality from previous lives. The native has to distance from people and enter the inner world, which is difficult, considering how quickly and how many bonds this person creates, due to habits.

The less the individual talks to others, the more he or she sees. The native has to open new windows or, rather, to look into another direction.

The curiosity and the thirst for knowledge are fine, but this person has to mold them up to their inner needs and not to the imagined expectations of others. Through the effect of the North Node, this person could gain an incredible opportunity for spiritual growth.

It could happen, once the native learns how to distance him or herself from all the too many questions from previous incarnations.

The person has to defocus from the finite realm and focus in the infinite. By doing so, he or she would lose friends and many contacts, which is something hard to deal with. Only few of them will understand this transformation from an extreme extrovert to the introvert.

However, this should be a good lesson. By experiencing this loss, the native will finally learn to distinguish friends from acquaintances.

This new spiritual development would help the native start focusing more in ideas than on what and how to say. Ideas would replace words, for only the words are limiting.

The sign matching the South Node would indicate ways in which memories from previous life still work in the current one.