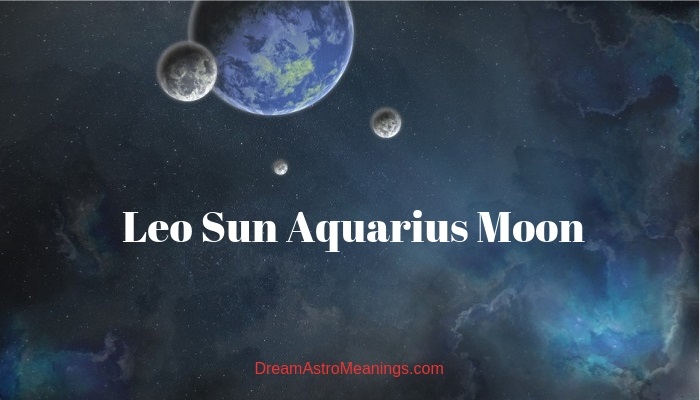 The sun is our rational side of personality, while the moon is our irrational side and our inner being. People usually immediately recognize the traits of our sun sign and the moon sign traits are not visible to many.

We keep them to ourselves and the people we consider the closest to us.

People with sun in Leo and moon in Aquarius are a good combination of fire and air element.

They have all the traits of the sign of Leo with an added touch of Aquarius uniqueness and eccentricity. These people have strong personalities and are usually very proud of themselves and their achievements.

Because both Leo and Aquarius are fixed signs, that usually means that these people are not prone to making changes and prefer the status quo.

They have a hard time adapting to new circumstances and making decisions often, which is why they can be prone to put up with situations and people that don’t suit them.

They usually take their time to make a decision and they stick with it even when the circumstances have changed.

These people can be very self-centered and focused primarily on themselves. They are also prone to impose their opinions on other people.

They don’t have a bad intention underneath; they do it because they truly want to help, despite the fact that no one has asked them to do that. In some cases, their intervention is welcomed, but in most cases, their intervening in people’s lives is considered irritating and bothersome.

Their lack of flexibility is an excellent trait when it comes to accomplishing their goals. They tend to stick to them and focus all their energy until they finally accomplish them.

These people are usually very courageous and often prone to extreme activities and sports to satisfy their need for danger and excitement.

Although they might appear egotistic and self-absorbed (which they usually are), these people sincerely care for other people and desire to help them. They are selfless when it comes to helping others.

They don’t feel sorry for their time or resources and are happiest when they manage to make someone happy. These people are true humanitarians who often dedicate their lives to helping people with needs.

They are very intelligent and sometimes their points of view cannot be easily understood by others. These people are interested in innovations, especially in the field of technology.

Many of them choose a profession in these fields and become successful scientists who invent something of use to humanity or at least to a great group of people.

They are usually responsible and reliable people. The sign of Aquarius could sometimes make absentminded and not present in the moment because their mind is focused on other things, but in general, they are good at performing their duties.

When it comes to finances, they could have different approaches.

Leo people love quality and luxury and enjoy having the latest and the best there is on the market.

With Aquarius in combination, they might be prone to spending their money on the latest technology and having the most expensive phone, musical devices, luxury vehicles, etc.

These people are usually capable of earning money and becoming financially well-off. They have the capacity and the ambition to succeed and they usually climb up the social ladder of success throughout their lives.

They often enjoy showing off with their belongings, mostly to satisfy their ego and their need to have the best money can buy.

They also have great organizational and leadership skills and often find themselves in managerial positions and company owners.

They have an adventurous spirit and love experiencing new things. These people love traveling to unusual places and seeing things that not many people have seen and experienced. They usually have the money to finance their extravagant journeys.

These people can have an extremely strong ego and often believe that they are better than others and deserve more than others.

They often have a superiority complex which causes issues in their relationships with others, and makes people consider them irritating and avoiding their company.

The good traits of Sun in Leo and Moon in Aquarius:

The bad traits of Sun in Leo and Moon in Aquarius:

People with sun in Leo and moon in Aquarius can have an unusual approach to love and romance. They are usually commitment types and don’t like to experiment much.

When they find the person who is a match to their desires and criteria, they usually don’t look any further.

For these people the most difficult part is relaxing and allowing themselves to get to know their potential partner and their qualities.

They love people, but they cannot easily relax in one on one communication. It takes time for them to accept a person and become more open in their encounters.

That is why they usually appear detached and don’t show their feelings.

For a person who fancies these people, it might be very difficult to maintain pursuing them because they don’t show any signs of affection for a long time.

When the phase of “getting to know each other” passes, things usually go at a much faster pace.

These people are usually family types and desire to have a big family of their own. They are capable providers and make sure their loved ones, especially their children have everything they need and desire.

They often exaggerate in the number of gifts they give to their children, risking to spoil them.

Their desire to be the best and have the best often transfers to their children; they want them to have the best as well, so that others can see that, which in the end also counts as their accomplishment and acknowledgment of their success and ability.

In relationships and marriage, these people often desire to have the last saying (regardless if they are women or men). They can be very dominant and believe that they are always right which makes making compromises difficult.

That is why they usually choose or end up with partners who don’t have personalities as strong as theirs so that they wouldn’t be in constant conflict with them.

If the partner also needs to express their attitude and belief and desires to make a compromise or agreement, that could be a cause for endless arguments which could lead to break ups and divorces.

That is another thing about these people in regards to their long-term commitments and marriages. They usually don’t have a problem committing, but the problem might be maintaining the relationship.

Their strong need for dominance and being in the center of attention often is the cause of problems in their relationships.

They can only be tolerated by people who don’t have much of an attitude and don’t have a problem being led in a relationship and told what to do.

Many people cannot tolerate that, but sadly realize that only long after the beginning of a relationship or marriage. The end-result is usually a break-up or divorce.

Unfortunately, these people are often unaware of their contribution to such an outcome because they cannot accept that they are anything but perfect.

These people need to learn to become more tolerant of the free will and opinion of others, not just their partners. They should also be aware that they need to make agreements and compromises in every relationship to ensure its longevity.

They have a passionate nature, and could have unusual tastes when it comes to choosing their partners. These people are usually faithful and don’t cheat on their partners. If they find a compatible partner, their relationships and marriages can be lasting and happy.

They are not very emotional and unless they have a prominent water element influence in their charts, they prefer a partner who has similar traits.

The best match for a person, who has Leo sun and Aquarius moon, is another Leo or another fire sign, providing that both partners have enough maturity to know that compromise and adjustments are needed in every successful relationship.

If that isn’t the case, and this person doesn’t have such level of understanding, it is best for them to be with a partner who doesn’t have a strong personality and has a natural desire and need to be lead and guided through life. In that case, their ideal partners could be Libra, Pisces, or Cancer.

For the last two, they would also need some water element influence in their charts to be able to emotionally connect with their partners.

People with sun in Leo and moon in Aquarius are usually proud people with a strong personality.

They have a dose of eccentricity and unpredictability in their character, although they usually tend to stick to the status quo and don’t like making changes.

They are usually very successful and often find themselves in leadership positions. They can be very self-centered and egotistic and irritate people with such an attitude.

They can also be very domineering, especially in their personal relationships, demanding they make all the decisions concerning both partners, which can be a serious issue that can cause a breakup or divorce.

They are commitment types and usually don’t have a problem deciding to get married, especially because they love children very much and love to have them as soon as possible.

Their character and egotistical nature are what often causes their relationships to end.

They are good providers and love luxury and comfort money could buy. They love to show off their possessions and achievements.