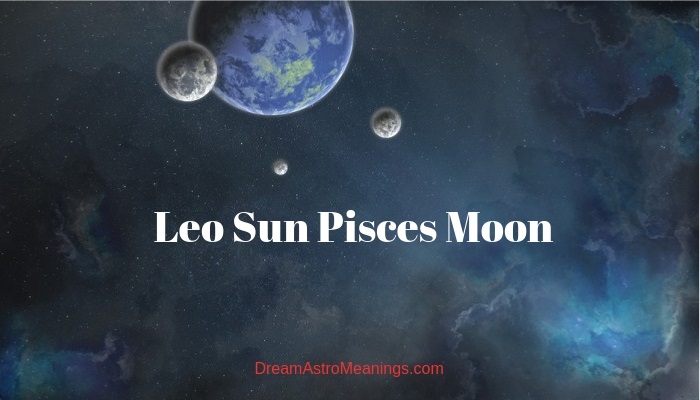 The moon represents our inner being and our subconscious, and that is why this part of our personality is only known to us and to some extent, to the people we choose to share it with.

People with sun in Leo and moon in the sign of Pisces are a combination of fire and water element. These people usually don’t appear as typical Leo.

The sign of Pisces makes their nature a bit calmer and gives them a dose of mystery and secrecy which typical Leo people usually don’t possess.

These people are usually very sensitive and emotional, but they don’t allow that to be visible to others. In public, they appear strong and cold, but in reality, these people crave for tenderness and attention.

Like all Leo people, these people are also ambitious and desire to achieve success in their endeavors, but they don’t talk and brag about their plans and accomplishments like the other Leo people.

They tend to keep quiet about their plans and actions, and many of them don’t talk about their achievements long after they are old news.

One of the main reasons for such behavior is their desire to keep others from their business. The Pisces in these people keeps them from sharing their privacy with other people.

These people have a strong imagination and are usually able to imagine the end-results of their actions before it actually happens. That helps them decide on the best actions which will take them where they desire to be.

They are very creative as well and often have artistic abilities. These people often choose some creative profession.

The combination of their Sun/Moon sign gives them talent for making movies or acting in them.

They have the acting talent, and Leo gives them the love for the stage and being in the center of attention, although these Leo people don’t like the spotlight very much.

They could also be great movie directors, which is a role which suits them better considering their desire not to expose themselves to the public if they don’t have to.

The moon in Pisces often gives these people some special gifts, such as ability to see into the future, or intuitively feel other people’s intentions and thoughts.

Sometimes these people have some healing abilities and use them to help people.

These people are not as self-absorbed like other Leo people, and often have a developed spirituality.

They are selfless and concerned for the wellbeing of others. They often help people, but in most cases don’t brag about what they are doing.

They have a strong personality, but in some cases, if their moon and sun have bad aspects with Neptune and/or Pluto, they could be prone to irrational fears, and feelings of depression and inability to face their issues and problems they have.

That could lead them to seeking some means, like drugs or alcohol, which will help them ignore the problems they have or help them forget about them. They could also be prone to gambling, as another form of addiction.

These people are less ambitious than other Leo’s, but they desire to have financial stability and enough money to feel secure.

That is what pushes their often lazy and prone to procrastination personality to take the action and find ways to earn money.

These people are usually lucky and fortunate opportunities to increase their income easily come to them.

They are often interested in secretive matters and secret knowledge. In some cases, when they have bad aspects of their planets, they could be involved in matters that are on the other side of the law.

In some cases, their path could lead these people towards a career in religious matters; they could become priests or have some other role within the church.

In some cases, they could be very religious and consider religion a very important part of their lives.

The good traits of Sun in Leo and Moon in Pisces:

The bad traits of Sun in Leo and Moon in Pisces:

People with Sun in Leo and moon in Pisces are usually very romantic, although that might not be obvious at first.

They are usually commitment types and prefer classical form of relationships or marriage.

These people need a partner who is emotional and can understand their need for affection and demonstration of love.

They need attention and they love to be pampered. These people are tender and love cuddling with their partners or spouse.

Their partner should be someone who will know how to demonstrate their feelings for them and show them their appreciation. They are usually very appreciative of their relationship and try to show that to their partner.

They could have a problem relaxing at first, and they need some time to know the person better before they could show their emotional side.

When they relax and let themselves show their feelings, these people become very sweet and almost irresistible.

They are usually loyal and faithful to their partners. In some cases, these people could be prone to cheating and having secret relationships behind their partner’s backs. These situations usually happen when their moon and the sun is in bad aspects with Neptune.

These people could be excellent at hiding the truth and managing to keep these side relationship secrets for a long time (as long as they want).

These people are passionate and tender in the same time. They need an affectionate partner who is also passionate. Their partners should also be confident and stable because they often need support when they get overwhelmed with their emotions.

They should also be financially well-off because they want someone reliable so they could build their relationship together.

They usually love children and desire to have their own family. As parents, they could be very tolerant and complaisant towards their kids which don’t serve them good.

They can be prone to allow them do whatever they desire and  buy them everything they want, which is not good for their sense of responsibility and appreciation of the things they have.

They should try to control their urges to allow everything their children ask from them.

The best match for a person who is Leo sun and Pisces moon is a fire sign with a touch of water.

These people need a strong partner, and that is why fire sign is a good match.

They could also get along well with an earth sign which has a bit of fire in their chart, so that they would be able to understand the fiery part of their nature.

The best water sign for them is Scorpio, preferably with fire influence. Pisces or Cancer could be a good match, providing they have some stronger earth or fire signs prominent in their natal charts.

Air signs could also be alright if they have some earth or fire in their chart to give them stability they usually lack.

People with sun in Leo and moon in Pisces are a combination of fire and water sign. That makes them adventurous, confident, sensitive and emotional.

They are not a typical Leo who is always in search of attention.

These people love to keep their privacy to themselves and don’t share it easily with the rest of the world. They also don’t like anyone messing in their business. They don’t like to brag as much and they can be quite secretive about their activities.

They often have some special abilities, like physical gifts, healing powers, heightened intuition, etc. They often use these abilities to help people.

They are creative and often have artistic abilities. They are romantic and usually commitment types.

They are usually faithful, but some of them with badly aspected sun and moon could be prone to parallel and secret relationships behind their partner’s backs. They are good at hiding the truth and often remain undiscovered.

They could also be prone to manipulating people or doing some criminal activities.

These people usually love children and are gentle and caring parents. The problem is that they are usually very tolerant towards their children and allow them to do whatever they want.

They also buy them everything they ask for and all that makes them spoilt. They can also be overprotective of their children, which is something that could bother their children a lot because it deprives them of their privacy.

They are usually financially well-off and love to be financially secure. They usually have luck in encountering fortunate opportunities to increase their income.

Some of them could be prone to feelings of depression or irrational fears, as well as avoiding dealing with the problems they have.

That could lead them to involving themselves in different addictions to help them ignore the problems they have and living in an imaginary world where there are no problems.

They need a strong partner to help them confront these situations when they arise.