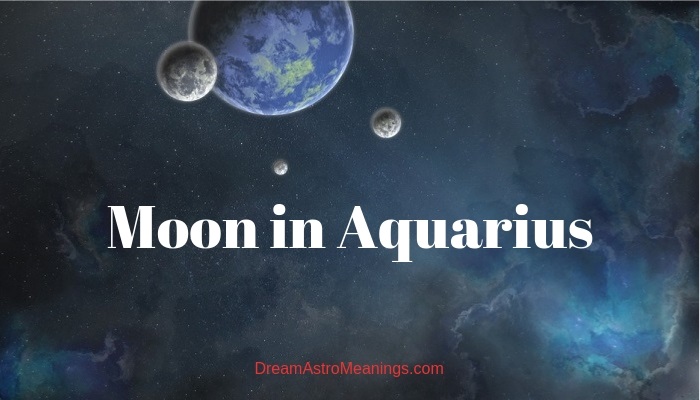 This astronomical body is believed to be around 4.5 billion years old, and that it formed not long after the formation of our planet. Scientists usually explain its origin in a way that the Moon formed from the debris which was caused by the strong collision between our planet and the astronomical body called Theia.

The Moon rules the sign of Cancer. In our natal chart, it symbolizes the individual’s instincts and their instinctive reactions. It also symbolizes our basic habits and our personal needs.

The Moon also symbolizes our subconscious content. This planet demonstrates a person’s way of handling their problems and the issues they encounter in their lives.

The Moon also symbolizes our mother and the motherly instincts we possess. It also symbolizes our female energy and indicates how much we identify with it. This planet also demonstrates how spontaneous we are. It indicates our protective instinct and our ability to protect ourselves and provide for our needs. It also indicates the amount of comfort we have in our lives.

This planet is the ruler of the Earth’s tides, and it symbolically rules the tides in the human body. It rules the change in the fluctuation of our energy, its increase as well as its decrease.

The Moon demonstrates the prejudices we have as well as our beliefs. It is also the ruler of our uncontrollable and spontaneous reactions. Unlike the Sun which symbolizes our rational activities, the Moon represents our instinctive activities.

It also rules creativity and our personal expression in different forms, usually through art or creative work. The Moon is also the ruler of our past, our memories and feelings, and people who are very influenced by the Moon often have a tendency to cling to the past and refuse to let go of some past hurtful memories.

Unlike the Moon, the Sun rules our present and the action-oriented approach towards the future.

The Moon doesn’t have the same influence on all people. Some people are more influenced by the Moon than other people. These people are usually the ones with the Moon as their ruling planet, i.e. people who have Sun or Ascendant in the sign of Cancer; people born with Moon in Cancer, Scorpio, or Pisces; or people who have a prominent Moon in their natal charts, which means they have the Moon placed on the cusp of the angular houses (1, 4, 7, and 10).

People who are strongly influenced by the Moon are usually very adaptable, emotional, sentimental, nurturing, and protective of their loved ones. These people often have some moody and irrational reactions, and are prone to frequent mood swings.

The areas ruled by the natal chart house where Moon is placed usually are the ones in where we feel very comfortable and relaxed.

The areas ruled by the sign where the Moon is placed usually indicate our instinctive behavior and our habits, which we usually tend to demonstrate in the presence of the people who are closest to us, and usually in our home.

Men with Moon in Aquarius can often be considered weird and eccentric, and certainly unique and different from others.

These people are very original and often have many innovative ideas to improve their lives and the lives of those around them. They have a kind and helpful nature and are often focused on helping other people.

Most of them are true humanitarians who are ready to devote their lives to accomplishing some great humanitarian cause.

These men love being a part of different social groups and networks and are very good at establishing relationships between people. They are very intelligent and often interested in areas which have something to do with the future and the advancement of humanity in general.

They can have a rigid attitude about things and be very persuasive. They prefer friendly relationships to intimate ones because they don’t easily commit. They tend to avoid getting closer to people, mostly because of fear of losing their freedom, but many of them do it because they fear being rejected because of how different they are.

They have many friends and acquaintances that enjoy being in their company and spending time with them.

Women with Moon in Aquarius are usually easy going and relaxed. They usually don’t appear very feminine and their approach is friendly rather than seductive.

These women often have an eccentric personal style, especially regarding their hair or the way they dress. They usually don’t follow fashion rules and they choose to dress the way they feel.

These women are very intelligent and unique in every sense of the way. Like men with this placement they tend to avoid intimacy because of fear that their freedom and independence might somehow be jeopardized, but also because they fear how their uniqueness will be accepted by others.

They are very kind and have a helpful nature. They are always ready to help anyone who asks their help and they often help even without being asked to. They are true humanitarians at heart and are often involved in some human rights activities.

They love being a part of a group or social network and actively participate in all group activities. They feel more comfortable in this role than in the role of an intimate relationship with someone.

They are not very passionate and emotional, and they have a tendency to talk about their feelings and rationalize them.

They love changes and can’t stand routines. Some of them can be prone to making sudden changes just to change something in their lives.

Some of the good traits of Moon in Aquarius:

Some of the bad traits of Moon in Aquarius:

People with Moon in Aquarius usually have unique and unpredictable personalities. They are focused on the future and are somehow different than most people. They have progressive ideas and are often innovators. These people are often perceived as “different”.

They don’t change their mind easily and often try to persuade others in their ideas. This placement of Moon isn’t very emotional and these people tend to express their feelings through actions, predominately words, rather than through physical aspects of a relationship.

They can also be perceived as distant and cold because of their tendency to verbalize emotions and feelings. Although they might seem as unemotional, that usually isn’t the truth.

People with Moon in Aquarius are usually not very passionate. They tend to have a rational and objective approach to their emotions. They have an ability to see the bigger picture of things and make the right decisions from a distanced point of view.

These people often tend to be oriented towards humanity as a whole. In many cases these people have prominent humanitarian tendencies and are often involved in helping people in some way. They are fighters for the rights of the oppressed and minorities and often find themselves fighting some cause through their entire lives.

They usually have many friends and need to be connected with many people. They love being part of different groups, networks, and communities. They can be so consumed with their role as a member of a group that they forget about the duties they have in their personal relationships with people.

They need partners who are tolerant and comfortable with this fact. They usually end up with partners who have similar inclinations and needs because they are the rare ones who can understand their behavior and needs.

These people have a natural talent to communicate with different people and the ability to adapt to different circumstances. These people consider everyone as equal to them and have a gift of bringing people together despite their differences. They are respected and loved by all of their acquaintances who are readily prepared to give them a hand when it’s needed.

Although they feel at their best when they are a part of a group, they also need their time alone to charge their batteries. They also have a habit of distancing themselves when they feel that they have become too emotionally attached to a certain individual.

These people don’t find it easy to connect to people emotionally. They prefer friendly relationships to romantic ones. Many of these people fear close and intimate relationships and getting too attached to a person.

These people often feel so different from others that they unconsciously distance themselves because of fear of being rejected by them when they realize that fact. They can be prone to changes in their life and sometimes these changes come suddenly surprising those around them.

They don’t surprise these people because they usually take their time to decide what they want. They cannot stand stagnation and that is why they are prone to making frequent changes to break the routine.

These people are great for communal living because of their love for being a part of a group.

Their reactions are calm and they rarely overreact. They are often full of innovative ideas to create a better future for themselves and those around them. Some of them are able to discover ideas which will benefit humanity as a whole.

In some cases, these people could be considered rebellious and eccentric. They are usually very original in their appearance and general outlook on life. They have a unique way of representing the common things.

Their spirit is adventurous and they love broadening their horizons and expanding their knowledge.

They are very supportive of others and try to help them whenever they can.

People with Moon in Aquarius are true humanitarians always ready to help those in need.

These people love being a part of a group and often have many different friends and acquaintances.

They love establishing contacts with different people, and prefer friendly relations than intimate ones. They are not very passionate and prefer to verbally express their devotion and feelings to their loved ones. They are usually not very emotional and they often prefer socializing than spending time alone with their partner.

These people are very intelligent and focused on expanding their knowledge further. They often need some time alone to recharge their batteries, but in general they are very sociable and communicative.

They are very tolerant and adaptable and they usually don’t make a difference between people. They can be considered eccentric and unpredictable, and they often consider themselves different from others, and that feeling pushes them to detach from others before becoming too close with them.

These people love their independence and freedom and don’t allow others jeopardize that without their permission.

They are not exactly home types of people, and it might be said that they are very comfortable with communal living. They love adventures and enjoy traveling and expanding their knowledge.

These people are often very innovative and capable of making some important world-wide discoveries. They are focused on the future and usually optimistic.