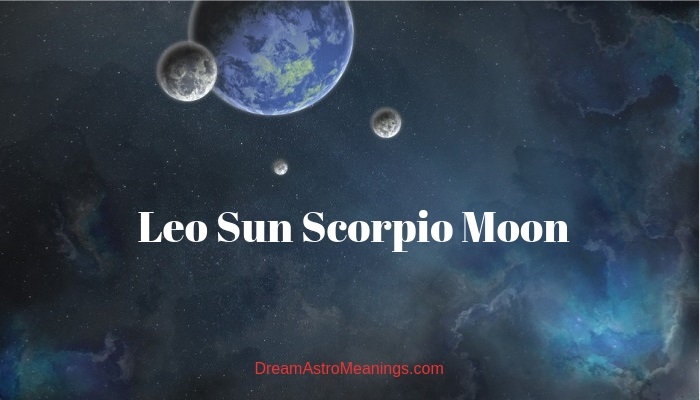 The sun in our natal chart describes our outer personality, the part of our character visible to our surroundings. The moon symbolizes our inner nature, our subconscious, the part which is known only to us and the rare people from our lives we choose to share it with.

People with sun in Leo and moon in Scorpio have fascinating personalities and are often magnetically attractive.

These people have a strong character and incredible willpower. They are brave and obstacles only empower them and motivate them to keep pursuing their goals and dreams.

These people can be egotistic and self-centered. They have a high opinion of themselves and their value, which is usually deserved.

They are leaders by nature and people instinctively trust them and want to follow their lead. They instill confidence and sense of security in people.

These people are very sensitive to lies. They don’t allow anyone disrespecting them, and lies are one of the most serious ways someone could show disrespect to these people. It is hard to lie to them because they see through people’s lies.

Lying is almost a certain way for someone to get out of their lives because they cannot be in contact with someone they cannot trust.

Their abilities make them good detectives and criminal investigators. They are often very interested in these areas, and make a career in professions related to them.

They are fascinated by secret things and mysteries. They are often interested in matters beyond the visible realms, the occult and secret knowledge. Many of them practice this knowledge.

They can be very spiritual and have some supernatural abilities besides their heightened intuition. These people sometimes have healing powers or an ability to see into the future.

These people are very confident and have stable personalities. They don’t get discouraged easily and they pursue their goals with persistence and determination.

They keep their promises and always try their best to do what they have promised.

These people keep their word, but they also expect others to do the same. They are very reliable and people who are irresponsible and unreliable cannot stay long in their lives.

They are ambitious and often very successful. They could be prone to bragging about their achievements, but in a more refined way than a typical loud Leo would do.

In some cases, usually when their sun or moon is in bad aspects with Neptune or Pluto, these people could experience attacks from powerful enemies who work behind their backs to harm them in some way.

They could be involved in some intrigues with unknown background and need to clear their name. These people might be prone to experiencing circumstances with a mysterious origin.

They are usually honest and very direct. These people detest lying and always try to speak the truth, regardless of the possible consequences.

Lying is usually not an option for these people. They often have a fearless nature and are not afraid to confront anyone or anything.

They confront their problems and they don’t run away from them; that is another important these people have. Whenever a problem arises in their lives, they immediately take action to address it and deal with it as soon as possible.

They are not prone to postponing anything. They want to get over it and move on with their lives.

These people are excellent in leadership positions. People love them as their bosses and usually don’t have a problem listening to their instructions.

Unlike many Leo people, these people tend to treat others with respect, regardless of the fact that they might feel that they are better than the rest of them.

These people usually don’t allow their vanity and self-centeredness be the first thing people notice about them. In a way, they are aware that these traits are not something they should be proud off.

Whatever these people do, they try to do it the best way possible because they care about their reputation and the opinion others have about them.

The good traits of Sun in Leo and Moon in Scorpio:

The good traits of Sun in Leo and Moon in Scorpio:

People with sun in Leo and moon in Scorpio are often balls of fire.

They are very passionate and have a strong desire for physical intimacy. They could be prone to changing their partners, but their approach to relationships is usually not as shallow as merely satisfying their physical needs.

Some of these people could be pursuing only that, but that usually happens in their younger years.

As they mature, these people begin looking for the full experience of connecting to a person’s body and soul. That is what these people usually desire from their relationship and their partner.

Besides being very passionate and magnetically attractive, these people are also very emotional, which is something ordinary people from their surroundings are not aware of.

The depth of their emotions can only be felt by the people who are closest to them, including their partners.

They often have difficulty connecting with someone physically if there are no emotions between them and that person (that is usually true for women with this placement, but men also).

These people are usually not interested in cheap thrills and one night stands. They desire a partner with whom they could establish a lasting bond.

Because they are so passionate and that is a very important part of their personality, these people also seek partners who can adequately respond to their initiative.

Their partners should know what they want and shouldn’t be shy at all.

They also cannot stand false morality and double standards. They are very straightforward and don’t tolerate pretending or faking reality. They can see through any deceit, regardless of how big or tiny it is.

Any sign of faking is a sign for these people to move on from the person who has tried to pull something like that on them. They want someone genuine, honest, and original.

Pretending to be something or someone they aren’t has a blocking effect on these people’s attraction and romantic interest.

They are usually commitment types and love to bond their lives with the person they feel is the right one for them. They don’t have a problem getting married, and they are very good in the role of spouse.

They could behave a bit domineering and try to have the lead role in the partnership, but will respect their partner’s opinion and don’t go against their wishes.

They are good parents who usually do an excellent job in raising their children. They have a good balance between being tolerant and strict, and their children know what their boundaries are and they respect them.

That attitude towards their children has a good influence in the process of forming their personalities and accepting the right life values and proper behavior. They take good care of their children and watch over them, but without intruding their privacy.

Their relationships and marriages are usually happy, harmonious and lasting.

In some cases, when the sun and/or moon make bad aspects with Saturn, Pluto, Uranus, or Mars, they could be prone to choosing partnerships filled with conflicts, aggression, and disagreements, which is often a part of these people’s life lessons, they need to go through.

The best match for a person who is Leo sun and Scorpio moon is another fire sign with Scorpio influence, or another Scorpio with fire influence.

Other elements (air and earth) could be fine as well, providing that they have some Scorpio and Leo in their natal charts.

Otherwise, it would be difficult for them to understand and get along well with these people.

People with sun in Leo and moon in Scorpio are very energetic, passionate, and often magnetically attractive to people.

Their personal magnetism often makes them the center of attention which is something they usually enjoy (although not all of them).

They are fascinated by secrets, mysteries, and the unknown, and often choose a profession related to uncovering them.

Many of these people are interested in the occult and secret knowledge. Some of them have the ability to see the future or heal people.

They all have excellent intuition and are able to read people’s thoughts and intentions. They are very honest and direct and hate lying.

When these people discover that they have been lied to and/or deceived by someone, that person usually doesn’t have a place in their life anymore. The main reason is that they cannot be around someone they cannot trust.

They are people of their word and love to be treated in the same manner by others. If people around them don’t keep their promises and aren’t reliable in some other way, that will get them out of these people’s lives.

They are commitment types and they need to establish a strong emotional and physical bond with their partner and spouse.

They are very passionate, but also emotional, which is why they seek partners with these traits.

They can be self-centered and vain but they try not to show that very much. These people are confident and usually very successful.