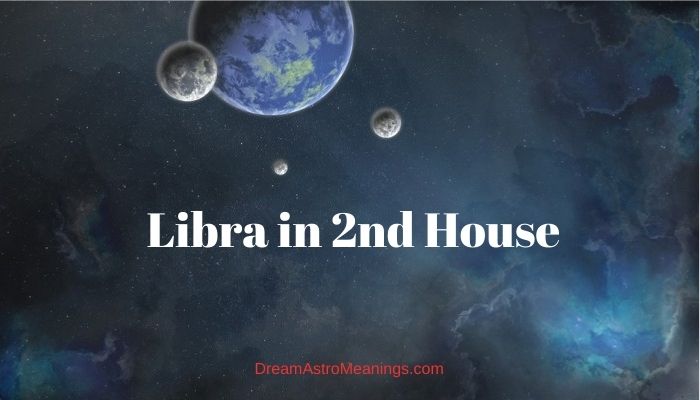 The sign, which corresponds to the top of the 2nd house, shows the area of ​​activity where the success of daily stable earnings is likely, and the qualities of character that help manage money.

In addition, you can find out the level of immunity and self-esteem, spending and eating habits, the nature of people helping in emergency situations.

All this affects the general well-being of a person, and the most pleasant thing is that if the planets and aspects weaken this sector, there are a number of actions through which it will be possible to harmonize it.

When the 2nd house is in Libra, it is important to pay attention to the resource environment, because without partnership, business and personal cooperation, it is impossible to achieve a stable income, and this will affect your health and mood.

A balance is needed between personal charisma and team service. Character and communication with the 2nd house in Libra At the first meeting, it is difficult to guess in the lover of comfort and beautiful things a restless and even adventurous character.

At a high level of spirituality, the native can simply dream and the possibilities for providing comfort and convenience come by themselves.

However, the more negative factors of influence or destructive figures of aspects in the card, the more actively strange personalities are attracted, ready to drag him into dark affairs.

The same fate awaits the naive Libra wards in early youth, so you need to avoid dubious companies both in friendship and cooperation.

The passion for art leads the owners of the 2nd house in Libra to the world of bohemia, where it is also easy to fall under someone else’s destructive influence.

The main dilemma is tossing between long-term hoarding and the desire to boo, throwing a sparkle in the eyes of others.

The second leads to bankruptcy faster than the native can foresee.

There are common features of the influence of 2 houses in Libra on fate: practicality, logical thinking, prudence in communication in adulthood, in adolescence – enthusiasm and naivety, an addiction to luxury combined with a fear of big money.

Lack of harmony between reason and feelings, especially if there were disappointments in people; relationships are a sphere of self-development, a source of material achievements and problems; a tendency to impulsive extravagance, when the desire to possess triggers the slogan: “burn everything with a blue flame”.

the desire to get into a certain social circle and the ability to compromise the rules of decency, forget about relatives and friends, in order to get into the world of the rich and famous; adjustment to the moral code and manners of a society that you like, which leads to personality degradation, if, for example, it is bohemia, where drugs and alcohol are the norm.

A native is a big child, undecided who he is: a modest art critic or a party star throwing a heap of money down the drain. Only by combining a love of beauty and a desire to manage money, being at the top of the social ladder, the Libra ward can become influential and rich.

Relationship with money Earnings come through useful contacts, personal consultations, and also after marriage. For women, this often means financial protection from a husband or lover. Men may also be tempted to improve their material condition at the expense of the ladies in love with them.

Especially if they originally grew up in poor conditions, far from secular circles. Money for a native is an indispensable condition for meeting the upper social stratum, where he is striving so much, therefore, even with a low income, he will prefer to buy an expensive thing with the logo of a well-known brand or go to a fashionable resort, limiting himself in daily spending.

Astrologically, in order for money to come, you need to give yourself the right to purchase beautiful interior items, jewelry, new pairs of stylish shoes with pleasure: optional, but heart-warming purchases. This includes a resource for more cash flow.

Owners of 2 houses in Libra perfectly realize themselves as diplomats, journalists, star managers, producers, makeup artists, photographers, gallery owners, organizers of festivals and exhibitions. An excellent choice is a marriage and wedding agency in any capacity, from employee to owner.

Working out 2 houses in Libra It is better to keep personal savings in different currencies and carefully sign contracts.

Since there will always be a temptation to get rich by dishonest means or at the expense of other people, which later comes out on the sidelines, great attention should be paid to the ethics of the relationship.

The habit of letting money go by itself is also characteristic of the owners of the 2nd house in Libra, which is fraught with bankruptcy in the first half of life. You need to learn to maintain a balance between generally accepted rules of behavior in the desired society and personal principles, and it is better to set them yourself, remaining yourself, and not adjusting to others.

This is easily obtained by carriers of the Ascendant in Aries, Leo, Aquarius, Scorpio and Gemini. It is much more difficult if the rising sign and the Sun are in Libra and Pisces. Financial success most often happens in the 2nd half of life.

When the native understands that it is easier to come to prosperity in cooperation, and it is easier to show your professionalism, finishing what is not thought out and not completed by partners. It often comes after marriage, so it is important to find happiness in your personal life.

Despite the fact that Libra is not a fertile Sign – it is a masculine, airy Sign, which means, in theory, should not contribute to the “multiplication” of money, Libra is ruled by “money” Venus! And this is already a good application for material wealth.

In addition, we also have a desire for prestige, social ambitions, material needs, and they are obviously high in Libra.

It is necessary that there is enough money not only “to live” but also for some life joys, worthy of her social circle, or necessary in order to fit into the desired society. And in this sense, Libra strives for earnings, for a fairly decent financial situation.

In the chart of men, such a position of the 2nd house may also indicate the desire to provide their financial niche at the expense of the ladies (although this is certainly far from necessary, but such a tendency still exists for the Libra, who are allocated in the material sense).

Libra loves money and strives for social heights. At the same time, it is important to note that it is important for Libra not to be in the “last ranks” in this very society.

Despite the fact that it is not the Libyan function to multiply what they are responsible for, it is in terms of money and social status that they are considered a good indicator (do not forget about the Venusian government).

Libra in the second house, as a rule, indicates a decent wallet, necessary for embedding in the appropriate social group. Do not be confused by the fact that when talking about Libra money we always “nod” towards society – for Libra, “level” is perhaps the most serious criterion.

Where Libra is on our map, we will always try to “look good” and need the approval of socially significant people. It’s just that when Libra is on the cusp of the 2nd house, money becomes a measure of the social level and a “door” to higher circles.

Here, the good financial level promised by Venus is ensured due to its importance. And at the same time, Venus, of course, significantly softens the process of receiving it.

But again, in this case, there is no need to wait for any additional problems, with the 2nd house or Venus unaffected. Naturally, if they have to somehow squeeze in money, or somehow seriously strain to match the financial image in their group, they usually will not show their difficulties.

They will explain the lack of opportunity to spend money by a lack of desire to do this, or they will find some reasons that lie outside the field of material difficulties, and, at the same time, beautifully and adequately explaining their decision.

It is difficult for a second home Libra to understand that they are experiencing some kind of monetary problem.

They dress well, are attentive to words, well-groomed (in this case, the ASC will turn out to be either Virgo, or Libra, or Leo – they are all very scrupulous in the topic of self-presentation).

Quite often, their material level is estimated by those around them higher than it really is.

This is the Libra’s ability to make an impression (it will not necessarily be consciously, just a corresponding sensation comes from the person).

Naturally, Vysotskaya energy is a million times thinner than Lion’s or Streltsovskaya’s, which are also perceived to be very successful in money matters.

Of course, second-home Libra (if the 2nd house as a whole or Venus does not say otherwise), will not scatter money, order a “gypsy with a bear” or arrange a performance on buying a llama in the city zoo (which can be done by 2-house Lions or Sagittarius, with additional indicators).

Immunity, like any other sections of Native’s life, should always be assessed as a complex of indications – where did Exercise. 2 houses, what aspects were formed, what else is there in the second house, etc.

But for Libra, such dependence on additional factors will be decisive. Only on the basis of the Sign on the cusp of the 2nd house, in the case of Libra, it is practically impossible to assess immunity at all.

Or it can be like “average” – not low, not high. But it should be noted that his immunity, as a common resource, will again seriously depend on social integration.

The more confident he feels in his environment, the stronger his body and spirit.

the desire to get into a certain social circle and the ability to compromise the rules of decency, forget about relatives and friends, in order to get into the world of the rich and famous; adjustment to the moral code and manners of a society that you like, which leads to personality degradation, if, for example, it is bohemia, where drugs and alcohol are the norm.