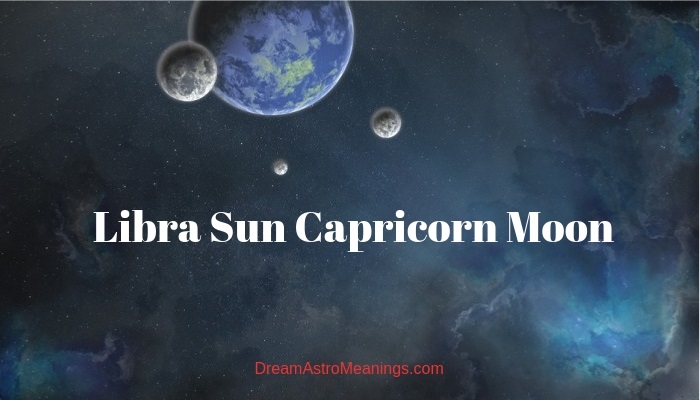 The sun sign gives a picture of our conscious and rational nature, while the moon sign reveals what is hidden inside of our subconscious mind.

We don’t share our moon sign traits with many people and some of them remain hidden from everyone.

The traits of our sun sign are usually visible to the people from our surroundings.

People with Libra sun and Capricorn moon have a character which is a combination of air and earth element. Both Libra and Capricorn are cardinal signs, and that makes this person full of initiative and enterprising.

These people are eager to begin new ventures and can organize all the participants necessary to fulfil a common goal.

The moon in Capricorn gives this person a dose of stability and confidence, but also makes this person prone to control their emotions and be strict when it comes to beliefs and attitude.

These people usually have a kind and helpful nature, but don’t allow people to use their kindness and gentleness as some other Libra people do.

They have boundaries to their tolerance and don’t let others manipulate them emotionally, or in any different kind of way.

They are usually not as indecisive like most of Libra people are. They can set their priorities and relatively quickly make up their mind about something.

They are determined and don’t give up easily on their ideas and goals.

They are not easily shaken by the challenges they encounter, and the external circumstances and they trust in their abilities to get the desired result.

These people are usually lovers of classical art. They are fascinated by the beauty of the human body, and usually prefer antic sculptures as their favorite art forms.

They are often history lovers, usually preferring ancient history. They are often artistically gifted and often choose some form of artistic or creative expression as their profession.

They are usually a mix of very sociable person and a loner. These people can be surrounded by a lot of people in their everyday living and have several real friends they could rely on at all times.

They can appear superficial, but are devoted and reliable friends.

They love spending time on their own to distance themselves from the crowd and contemplate on some serious subjects as well as devote their time to the activities which interest them.

One of the main good traits of most of these people is their trustworthiness, love for the truth, and righteousness. They often fight for the rights of people who are somehow oppressed.

They often choose the legal profession as their career and are usually very successful in the field of law.

These people love to be of service to others, but as we have said previously, don’t allow anyone to manipulate them.

They are usually reliable and responsible. They might be prone to questioning their decisions, but that usually doesn’t take a lot of their time.

They love to be admired and appreciated for their work, and in some cases can be very egotistical and self-centered. The moon in Capricorn is not a good position for the planet of emotions.

It makes these people appear (and be) cold and reserved. They almost never allow emotions overwhelm them so much that they are unable to control their reactions and decisions.

These people can be self-centered and focused on their needs first. That is what allows them to distance themselves from situations where they could get emotionally involved with an uncertain outcome, or where their interests and/or emotions could be hurt.

Although they might not appear like that, these people usually have strong characters and cannot be influenced easily into changing their mind.

They think carefully and consider all the details before making their opinion about something or making a final decision.

They are usually ambitious and love success. They are determined to become accomplished in their chosen area and believe that they should be adequately rewarded for their efforts.

The good traits of Sun in Libra and Moon in Capricorn:

The good traits of Sun in Libra and Moon in Capricorn:

People with Libra sun and Capricorn moon are usually good looking, and attractive. These people seek a successful and confident partner or spouse.

These people are rational when it comes to their emotions and matters of the heart.

They usually don’t allow themselves to be overwhelmed by infatuations with people who are not a good match for them. They take their time before committing to notice the red flags if there are any.

These people are often selfish and put their interests in the first place, often before their partners/spouses and sometimes even their children. They often have an attitude “if I don’t look for myself, no one will”.

These people usually don’t think what other people think about them and their attitude.

They usually look for someone reliable and stable, someone they could also rely on when they need. They want a partner or a spouse who is honest and trustworthy. They cannot be with someone they don’t trust.

These people are righteous and often fight for people’s rights, which is why they need someone who has similar traits and activities.

They are empathetic with other people, and even though they often don’t know how to express their emotions in an open and relaxed manner, they are very emotional and affectionate.

They desire someone who is also emotional, and could have the necessary patience to wait for them to relax and begin opening up and showing their feelings.

These people are very responsible and perform all their duties in time. They could be overwhelming for partners who don’t have such an attitude towards their obligations.

They could also be very demanding and sometimes behave bossy towards their partners, which can irritate some of them.

People with Libra/Capricorn Sun/Moon combination might not be eager to start their family because they can be a bit egotistic and focused on their needs and desires.

Children require complete devotion of time, and these people sometimes selfishly postpone that moment, and some of them decide not to have children at all.

Although they might be paying attention to themselves a bit more which could be unacceptable for some people’s taste, these people can be devoted to their partners and establish a harmonious and lasting relationship or marriage with them.

They know how to give love and attention, and their partners usually don’t lack any of them.

They might need to get used to their partner’s desire to be in the center of attention, but in general, these people are a good choice for someone who wants a stable and lasting relationship with a reliable partner.

They could be passionate and have strong physical urges, although that might not be apparent at first.

They have excellent manners, and personal style, and their partners are proud to present them in public. They sure know how to make heads turn.

As parents, these people are a combination of someone who is very complaisant and prone to be overly demanding from their children.

These people often transfer their ambitions to their kids, and expect them to fulfill them or at least fight for them as they would. Their children are usually well-mannered and responsible.

The best match for a Libra sun and Capricorn moon is an earth sign, with air element.

They could also get along well with water or fire sign, providing their partners have enough confidence and stability, and fulfill their other criteria.

People with sun in Libra and moon in Capricorn have dominant personalities and desire to be in the center of attention.

They are not like typical Libra, indecisive and prone to questioning their decisions; quite the opposite, these people usually don’t take a lot of time to make up their mind about something and then take action.

They are often good looking and seek partners who look similar. They want someone stable and reliable as they are.

They are usually ambitious and strive towards success. Their partners and spouses should be successful and ambitious as well.

These people usually don’t rush into relationships and don’t allow themselves to become infatuated with people who wouldn’t be a good match for them. They are often self-centered and a bit selfish which is why they attend their needs first.

They believe that a person should take care of themselves first and then look after others. They are passionate, but that is not easily seen by ordinary observers.

These people usually know what they want and go after their desires. They are usually confident and determined. They are righteous and fight for the rights of oppressed.

They are trustworthy and honest, and these traits are among the most important ones their partners/spouses should possess.

These people are emotional, but often their stiffness and rigid attitude make them appear cold and distant.

They simply need more time to relax and get to know a person better.

Their self-centeredness often makes them postpone starting their own family and some of them decide not to have children. As parents they could be very demanding from their children.