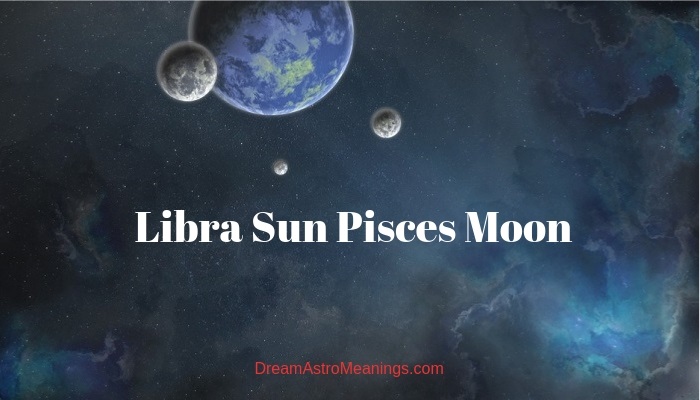 The sun sign in our natal chart represents our conscious side of nature, while the moon represents the unconscious.

The sun’s sign traits are the ones which are visible to the people from our surroundings, while our moon’s sign traits we tend to keep to ourselves or share them with the most intimate friends.

People with Libra sun and Pisces moon have kind and tender nature.

They are often emphatic and able to sense what other people feel or think. They are capable of feeling people’s pain and suffer and usually offer their help in overcoming them.

They are always ready to be of service to the people from their surroundings, and not just their closest ones.

These people are an epitome of gentleness and kindness and usually put the needs of other people before their own.

They are selfless and enjoy making others happy even if that makes them not have enough time to attend to their own needs.

They often possess some healing powers or are highly intuitive and able to see into the future. Some of them use these abilities to help other people.

These people are often highly spiritual beings and devote their lives to seeking spiritual enlightenment. They often possess great knowledge in secret and mystical subjects.

These people love beauty and the arts, and are often artistically gifted. If they are not, they are art lovers with excellent taste.

If they have artistic talents they could become renowned artists or choose some creative profession.

These people usually have a calming and balancing effect on other people. Their nature is usually balanced and they seek to achieve harmony in all areas of their lives and in the lives of other people.

They are gifted for mediating in people’s conflicts and disagreements helping all sides come to an agreement. These people often seek justice and respect of rights of every being on this planet.

Although Libra is a sign that fights for the rights of oppressed and is against lies of all kinds, with Pisces moon, this person could be prone to secrecy and avoiding to speaking the truth in some occasions.

With bad aspects of their planets, these people could also be prone to manipulating with others and using their weaknesses to their advantage.

Their ability to see through people’s motives and intentions could often be of great use to them, but not many of these people use this information for any other purpose except to help these people.

They are often not very ambitious (at least not in the classical sense of the word).

They have a tendency to go with the flow when it comes to some major life’s decisions and situations, relying on their luck to bring them the most favorable outcome, and they are often right about that approach.

Some of them could also be prone to taking risks which in some cases turn out to be a very bad decision, but often bring them favors.

These people could be prone to ignoring their problems instead of solving them.

If they don’t have some stronger planetary influence in their natal charts, they could be prone to self-deception and putting their head in the sand, hoping that their problems will miraculously disappear.

They could also be prone to choosing the wrong company which could prove to be a bad influence on them. Their tendency to ignore their problems could lead them to addictions such as drugs, alcohol and gambling.

They need to work on building the strength of their will and confidence. They also need to work on their tendency to trust people’s intentions without noticing the potential red flags.

They need to learn to protect themselves against being used by other people and their kindness and generous nature being mistreated.

These people often offer their help and services without being asked, which often leads other people to take them for granted and not be as appreciative of their help as they would have been towards some other people.

They need to start appreciating themselves more and others will stop taking them and their kindness for granted.

The good traits of Sun in Libra and Moon in Pisces:

The good traits of Sun in Libra and Moon in Pisces:

People with sun in Libra and moon in Pisces have kind and emotional nature. They are commitment oriented and enjoy being in a partnership.

Their desire to be in a relationship and tendency to avoid being alone at any cost, could often lead them to hasty decisions and entering relationships with people who are a bad match for them.

They need to stop compensating their weaknesses and building their confidence and self-love.

When they learn to be on their own and be satisfied with being their own company, appreciating themselves and their abilities, their life will also begin to change.

They will take more time before deciding whether to commit to someone or not and be in a better position to notice the person’s red flags which could be a deal breaker for them.

These people love to be in love. They are romantic and seek someone who has similar traits.

These people enjoy all the aspects of being in a relationship and desire a partner who will contribute to the stability of their relationship or marriage.

They desire harmony and cooperation in their relationship and they need a partner who has the same preferences.

They need someone who is stable and confident and able to support them during some of their emotional crisis. They could be prone to being emotionally unstable and having issues encountering their problems.

That is why they need a partner who will be tolerant and understanding enough to support them to go through these tough times.

They enjoy taking care of their partners and making them feel comfortable and cared for.

They also desire someone who won’t have a problem with expressing their emotions and devotions openly. They need to see and feel the love from their partners and spouses.

People with conflicting and aggressive personalities repulse them, but they often end up in a relationship with someone who has such traits because of their eagerness to be in a partnership and not allowing themselves enough time to estimate their personality and possible negative traits.

These people have a calming effect on their loved ones, and in an ideal scenario, their houses are comfortable and cozy places where all their tenants enjoy peaceful and relaxing living, filled with cooperation and compromises.

They love children and often establish their families early in life.

These people are tender and gentle parents who pay a lot of attention to their children’s needs up to the point of spoiling them and making them ungrateful.

They could be overly complaisant to their desires and not have enough strength to impose their will upon them. They might end up not being respected by their children because of lack of authority.

If they want to change that, they need to work on building their authority with their children and not giving up to all of their desires.

The best match for a person is an earth sign with air or water influence.

Libra people are usually very adaptable and they could get along with almost anyone.

They need a strong and confident partner who will be able to put up with their weaknesses.

That partner could also be a Scorpio, or a fire sign with some water in their natal charts.

People with sun in Libra and moon in Pisces are lovely beings. They are kind and gentle, and enjoy most of all to help other people and make them happy.

These people are often very intuitive and have the ability to feel what others think or feel.

They intuitively know what to say to console them and ease their pain. They are often gifted with some healing powers which they use to help others.

These people love beauty and love the arts. They are often artistically gifted and can become renowned artists or choose some other creative profession.

If they don’t have talents for arts, they surely have a great taste in arts, and often collect artworks.

These people usually have a strong need to serve people and often offer their help without being asked to.

They selflessly devote themselves and their time to others putting their needs first, and neglecting their own, and they often experience lack of gratitude and being taken for granted by these same people.

These people that take them for granted are often their closest family members and friends.

They need to learn to appreciate themselves more and think about themselves first, if they don’t want to experience disappointments and lack of gratitude.

They act as if they don’t value the effort they are putting into helping others with their problems, and that is why the people who are being helped don’t value them as well.

These people can be prone to indecisiveness and lack of confidence. They also could be prone to postponing and ignoring their problems, by occupying themselves with other matters instead of dealing with the burning ones.

Because of that they could be prone to different addictive behaviors which distract their minds of their problems.

They need to work on building their self-confidence, will, and persistence and stop relying on others to fix them or their problems.

When they begin believing in their worth and abilities, things will dramatically change in their lives, for the better of course.