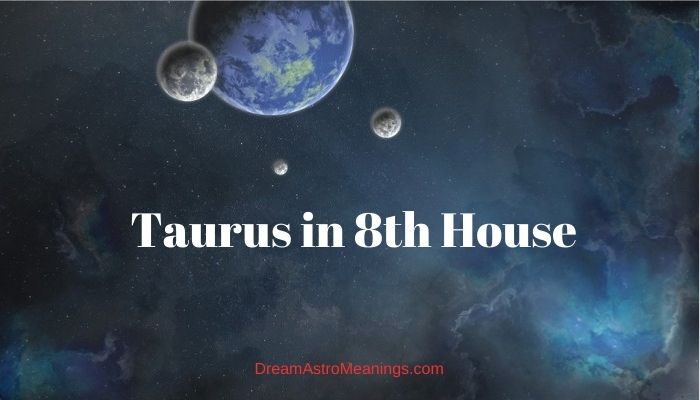 Life changes are not easy for this person. They usually last for a long time, and he perceives them as hard work that needs to be done both within himself, gradually adapting to new conditions (new egregor), and outside, finding his place with difficulty and not immediately in a changed environment.

Marriage, divorce, change of residence, employment and dismissal, even with the most harmonious aspects of Taurus, when everything happens naturally and at the right time, will not pass easily and quickly, and will not go unnoticed in a person’s emotional memory.

The tense aspects will aggravate the difficulties of the troubles of perestroika, and it will seem hopelessly difficult and, in principle, impracticable to a person, and marriage will be a prospect for him as unrealistic as digging a canal connecting the Black and Caspian Seas alone.

In borderline states, this person will require very heavy and prolonged stresses. With a harmonious Taurus, they are feasible, with a defeat, they are often not; and it is necessary, overcoming your inertia, to look for indirect ways out of tense situations.

Psychological crises are severe and long-lasting, it is possible to fixate on certain circumstances, which seem to be huge and unshakable obstacles, and until this point of view is changed, overcoming the crisis may be impossible.

With the defeat of Taurus, this is a very difficult patient for a psychologist and psychiatrist; shows certain physical exercises and work linked to the carpological problem.

With a group, a person gets along with difficulty, but if and when this happens, you can defend its interests with the strength and consistency of a caterpillar tractor; in case of a conflict, this tractor runs over him, you need to learn flexibility of behavior and thinking and balance personal ethics (II house Scorpio) with the collective, and not oppose them to each other.

This person feels well the magic of things, objects, has the ability to massage, especially oriental; when he perceives the astral plane, the latter is real for him and is filled with completely living beings.

Psychological crises are usually severe and prolonged. In case of defeat, negative fixation on certain circumstances is possible, which is difficult to get rid of.

A clear, sustainable solution to risk problems. The impact of negative situations is often lasting, stable, sometimes lingering. Danger of being covered with earth, stones, freezing. Sometimes (with confirmation) a karmic inheritance from a stranger.

Ability for energy massage, acupuncture, good energy contact with objects, the material world. Working out is associated with the development of subtle feelings, flexibility of behavior, the ability to positively transform your psyche. The death of such a person is usually calm.

Financial disasters or enrichment are possible: “From rags to riches, and vice versa.” Involvement in social activities. In relations with the team, there is a lack of flexibility. Patience until a certain moment, then – an explosion. The symbol of inheritance. Calm death.

He is responsible for death, literally or figuratively. For example, he shows the bankruptcy of a company – its symbolic death. He can show how the house becomes uninhabited – the owners leave it – the symbolic death of the house.

In his article Homes in Astrology, Mark Reborn showed why this house has such a character.

Also, the 8th house is called the house of weakness – any planet in the 8th house immediately loses all its ability to act. It becomes difficult for a person to show what other people are given easily and naturally. And this creates difficulties.

The main feature of the 8th sector of the map is the creation of situations of improvisation, where there are no social patterns and rules. If a person cannot take a step without approval, then the 8th house will bring him many problems.

But, if a person is ready to overcome obstacles, learn from his mistakes, then the 8th house in astrology opens up great opportunities for him.

If you have planets in the 8th house, or rather even many planets, then you are an eight house.

Remember, at the beginning of the article I wrote that the position of the planet in the 8th house prevents it from manifesting itself.

The planet is weakened and manifests itself only in a crisis situation when maximum effort and energy is required.

The sun in the 8th house. A person is characterized by the desire to get involved in all kinds of adventures. He, literally, cannot sit still for a minute.

Naturally they are very materially attached. Therefore, crises here are often a continuation of this material dependence. For owners of Taurus on K8, crises are often associated with money. Instability in this matter, any restrictions with money, can be felt by a person as something global.

Naturally, there are diseases that follow Taurus and Venus, so if you see the struck Venus in the 8th house in the chart, or it, being struck, rules the 8th house, then it makes sense for the Native to pay attention to these organs (more on this in topic 6 -12 at home).

But if we talk about the dangers of, shall we say, the outside world, then in general there are not many of them. Not a love of change.

Venus (in particular, it is the struck Venus, not Taurus) can give danger caused by the external attractiveness of the Native (by the way, in our latitudes, with the 8th house in Taurus, Libra (!) Often turns out to be on the ASC), or danger from women.

And here, too, it is important to clarify – the point is not that the Native must necessarily be very beautiful – this is how lucky.

The point is that at some point, in a particular situation, the Native can be perceived as the most interesting option available, and as a result, this constant or sudden demand for him can bring him trouble (of course, Venus should be struck ).

These can be love crises and dangers from love or lovers. This topic is VERY wide – from dramatic love to a jealous lover / husband (of course, with additional evidence). Therefore, at least one should be very careful to establish parallel connections, or actively emphasize their sexuality.

Again, giving hope “for a continuation” when you are not going to justify it also does not always make sense – people may not correctly understand your Venusian promises, and not distinguish between non-binding flirting and a direct proposal. And your attempts to “release everything on the brakes” can even provoke aggression (especially if there is confirmation from Mars, Uranus or Pluto).

It is worth noting that the affected Venus, as an element of the 8th house, especially if it has something to do with the 8th house, may indicate another danger from beauty – when, in an effort to create the desired appearance, the Native can significantly suffer from unsuccessful plastic surgeries or cosmetology procedures.

There may be a danger from beauty procedures. The degree of possible damage can be assessed by the strength of the damaging factors, and of course by their interaction with other elements of the horoscope.

Venus-type people, especially young, beautiful women and girls, can also be dangerous. For example, a woman, having fallen in love, wants to “take away” a man from the previous relationship, or vice versa – another woman interferes in the Native’s relationship.

The native needs to be EXTREMELY careful here. This other “love” can pose a serious danger to the Native (both a direct personal threat and a source of crisis in the form of divorce (and divorce is both outraged feelings and an extremely significant change)).

Otherwise, in general, Venus and Taurus are quite problem-free indicators for the cusp of the 8th house. There are no special stories to tell about them – it is important to closely monitor the impression you make.

Assess the situation adequately – whether or not you should use your attractiveness in it. Be more careful in your love affairs. And careful in dealing with women (including friends, by the way).

Any life changes of this person are very hard and painful. By the way of transformation, they become long-lasting, than in a greater degree they drown both their neighbors and theirs.

On the basis of the means, this person walks deliberately, unchanged the way – clearly imagine what he is supposed to count on.

Psycho-logical transitions pass hard, because he is inclined to be careful about certain conditions and conditions of vision, praise, praise Influence of the 8th house on the knowledge of the zodiac.

If he got to live with a team, then he is ready to consistently and firmly disregard the interests of the community. He is to learn to be more flexible and to be flexible between groups of moral values ​​and personal ethics.

The death of such people usually turns out to be calm. Communicating with a man at the 8th house in All times these people treat how hard work – a chill, marriage, the satisfaction of the work, the welcome

All changes are considered as tedious and difficult, they remain in the memory of emotions even when they happen unintentionally and in the required Any change is strange to such a person, ineffectual and needlessly complicated.

In extreme moments, it does not require a lot of heavy and long stays. Usually they are revealed to him by force, although from all this it is easier and does not stagnate. Psychological crises pass with difficulty and for a long time, without any particular faith in victory and yourself.

The main condition of victory in the course of time for this person is to assure that all of them are, in principle, acceptable. The interests of the group, this person leaves off consistently and consistently.

But in general, he with effort is oriented in areas lying between individual and group ethics – it is hard for him to find a balance of co-operative needs and He perfectly feels the magic of predictions, exhibits an unusual ability to massage, and faithfully recalls the thoughts and forms of the unseen world.

The partner usually gives help to this person, especially if he can help him in a timely manner. He knows how to play with his talents, when it is required to use unfavorable situations. In a sexual relation the problem is small.

A tendency toward egotism can be revealed. This person can use his abilities for a very deep study of occult manifestations.

Rarely, such people possess the ability to spirituality and profound transformation.

Generally speaking, Taurus is a rather benevolent Sign, and Venus, as an element of the 8th house, by itself (without defeats from malefactors) rarely gives any serious crises, dangerous situations.

It’s still not Mars, which is a malevolent in itself, and from which you can initially expect trouble when it hit the 8th house.

However, Taurus also has its own characteristics. The first and main Taurus ‘feature (not Venusian, namely Taurus’) is that he really does not like changes – an earthly, fixed Sign. Anything related to change is often perceived by him as a great stress, if not a crisis. People with such an 8th house will cling to stability to the last, resisting changes in every possible way.