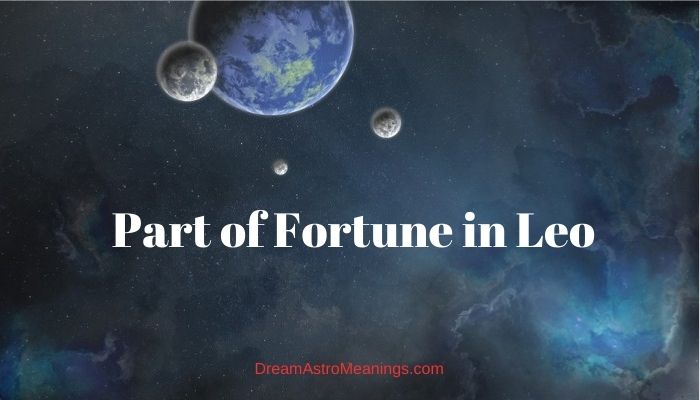 Part of fortune has no material nature. This point is determined by calculating the coordinates of the Sun, Moon and Ascendant, and is indicated in the Cosmo gram by the icon: If we consider the Ascendant as the character and type of initiative of the born, the Sun as a symbol of gold, and the Moon as a symbol of silver, then it is not very difficult to reveal the symbolism of the combination of these three factors.

“Part of Fortune” literally is a part of the state, wealth. In this context, the Part of Fortune symbolizes the nature of a person’s wealth, in his individual value system.

The Part of Fortune, like the planet Jupiter, promises abundance.

However, it covers a much larger part of human existence than any particular planet.

The Part of Fortune attunes the individual to the environment in which prosperity will be most natural for him, and determines for each person what his unique and special concept of success will be.

It also shows a person’s most powerful need, defining the key note at which his whole being resonates. Every individual has an ego and an ego ideal.

The simplest way to define the ego is to say that this is what a person thinks of himself.

At the same time, his ego ideal consists of thoughts that represent everything he would like to be, but which he has not yet become.

Thus, the ego ideal is always much larger than the real ego in terms of a person’s dreams of fulfillment.

As a result, when a person looks at himself, he simultaneously sees both his ego ideal (everything that he would like to be) and his ego (knowledge of everything he really is). He often sees a huge discrepancy between the two.

Therefore, it becomes a very important and sensitive point of the horoscope through which the entire chart can be interpreted.

Then one can understand the ways in which planetary energies can be used to place a person on the path of wonderful perspective.

In this case, all obstacles, conflicts and tense situations that appear in the map can be viewed as a tool or a path made of stones to achieve that single goal that will bring a person the greatest joy.

At the same time, the horoscope acquires a broader perspective. Instead of focusing on a particular problem or conflict, it draws attention to that particular point in the chart where a person can find the greatest expression of joy.

As a result, a person can learn how to use all planetary energies by focusing them on the sphere of the greatest aspiration of the Soul.

As a focal point, the Parte of Fortune helps a person look beyond what the lower (or specific) mind perceives and create the right perspective for the higher (or intuitive) mind to unfold.

This opening allows for higher ideals and goals to emerge, providing an expression of the true essence of the Soul. The spiral is twisted both inward and outward.

The charismatic Leo attracts not only an abundance of friends and opportunities, but also knows how to survive the tumultuous times of life with his characteristic style and good mood.

Every Leo is born with good luck in his hands, as love conquers all adversity. Leo, controlled by the heart, is able to overcome any difficulties in life and, having achieved the goal, move even further, like all natural-born leaders, they do not know peace.

As soon as Leo enters into a relationship with another person whom he completely and completely trusts, he is completely dedicated and devoted to him.

It is difficult to get along with such people, but if you have achieved their favor, you should not test your relationship for strength, if Leo suspects deception or is betrayed, he will never forget the insult inflicted, will take revenge at the first opportunity, and he rarely changes his mind about a person who once showed his true self.

There are three levels of soul development in people born under the sign of Leo. The highest is represented by the Sphinx – this is a wise beyond his years, a mythical creature, a great teacher and mentor.

The second is Leo, the king of the jungle, who rules over the Leo’s ego, but always speaks out to protect and support those he loves. And the last level is Leo’s cub, immature, unformed, and frightened by all new babies.

It is important to understand people born during this period from this point of view: inside Leo, all levels and facets of the soul are drawn to each other, they cannot exist separately.

Nevertheless, if you have to deal with such people, count on the fact that in some issues Leo can provide an unimaginably wise solution, and at the same time, as a child, he will have fun and rejoice in ordinary earthly things.

All Leos are trendsetters, leaders, and adventurers. Their weakness is their pride, such people melt with flattery and this is probably the easiest way to their hearts, but the slightest criticism, in front of any person, will close the last opportunity for peaceful coexistence.

Leos are generous and proud people who are the embodiment of vitality and authority. Leos are constantly striving for self-realization, and, I must say, for the most part they successfully achieve their goals.

Representatives of this zodiac sign love to be in the spotlight. They know very well what impression they make and try to make it even better and more effective. Leo will always do everything he can to be thought well of him.

Both in the spiritual realm and in the material realm, those born under the zodiac sign Leo are constantly striving to create something new.

In order to achieve the goal, Leo will spend large amounts of money, time and knowledge, practically not caring about themselves.

Leo is very attracted to the opposite sex, but excessive gullibility ruins them. Leo can often become a victim of deception, because he trusts other people as himself.

Leos always have a fairly high opinion of themselves. They will always do whatever they think is right, regardless of public opinion.

Leo is often impatient and stubborn, so those who disagree with him should exercise maximum caution in order to somehow influence him.

The typical Leo is a domineering and noble person. He has great performance qualities. Lions seem to be born to lead and maintain order wherever they are.

Leos are very attractive, inspire confidence in other people, and it is pleasant to communicate with them. Leo’s spells are usually very difficult to resist.

Leo does not need to make a large amount of effort in order to achieve what he wants, as if everything turns out by itself. People love L’viv and usually try to help them in everything. Leos are very noble, loyal and romantic.

Sometimes, for all their positive qualities, Leo can become too self-righteous, proud and ascend over other people.

Also, due to the fact that it is important for Leo that others think of them exceptionally well, they can wear a mask of virtue, although in fact they are not who they seem. Plus, Leos can be vain and cruel.

Part of Fortune in Leo – Meaning and Symbolism

Leo is a sign of creativity, which accumulates for many years, and sometimes life. A creative person walks, looks, is filled with impressions, once….

And he wrote a poem, invented music, painted a picture, that is, matured and produced a product. And again he calmed down and begins to look for something else, to mature. He needs to mature to create.

When a husband and wife are from different energy crosses, then one is immediately ready to do, and the other needs to mature, not understanding these cosmic laws, we inflict a lot of harm, insults and claims on each other.

The zodiac sign Leo is a stable, constantly burning fire that shines and warms. It is warm and pleasant around him. Leo is an informal leader, a toastmaster at a festive table, an actor in the theater and in life.

Strive to reign in the family, at work, among friends and in your own kingdom! Nothing of human joys is alien to him. Demonstrative.

As a child, this is the child with whom all other children “want to hang out.” If the girl he cares for gives preference to another, she is sincerely surprised, because he is the best!

Leo strives to be the center of attention at all times. If he is not handsome, smart or educated enough to become a true leader among his peers, he will become a braggart and an inventor, he will in every possible way exaggerate his own significance, Or maybe he will become a leader among the younger ones (for children, any adult is a Leo).

In all situations, always and everywhere, he does not forget to think about how he looks from the outside.

Leo is an egoist. He knows everything “Best of all”, needs a train of admirers and admirers, however, he also knows how to “shine” on those around him, to warm them. And often he gives much more than he receives.

The brightness of the lion gives the best expression to the Sun, its activity of independence, independence, and creative forces. The sun in Leo is the creator, the creator. He is already a grown man, a young man. Poorly correlates its actions with the outside world. His goals, desires and actions are based on his inner motivation.

Its manifestations are natural and do not require effort, only the presence of space is important to it. He himself creates the world out of nothing. This is a director, an artist and an artist. It manifests itself as a will in the world, as a plan that is directly realized.

He is not a fighter, he stubbornly and calmly realizes his plans, and with resistance he goes to the side and continues them there. He creates his own space and reigns in it.

Of all the zodiac signs, Leo is the most direct, does not know how to bypass obstacles, and when it is under pressure, it seeks to get away from it, because it cannot take any other form, except for the one that it owns, through which it expresses its natural state.

The sun in Leo most often remains as it is. Leo’s upbringing most often comes down to trying to suppress his will, and if this succeeds, then Leo has a hard time.

Leo is a creative will that wants to find its own realization – hence the brightness, openness, naturalness, independence.

The Sun in Leo seeks to find an isolated space in order to create its own independent world and its own laws in it.

The sun in Leo finds support in itself. He does not need external confirmation of his innocence, he feels that his ideas and plans are correct.