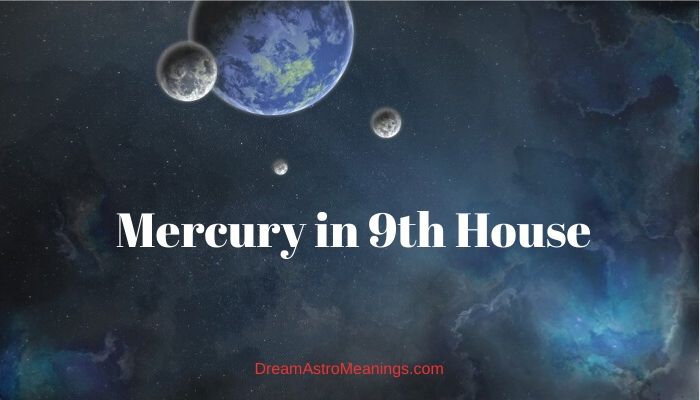 Astrological readings are a wonderful opportunity to learn something about yourself and your destiny.

Everything has been written in the stars, but not the way you might think. All of your potentials is what your natal chart hides. The rest depends on you! Each segment of your birth chart holds a precious piece of information about who you are.

Moreover, they are about what you could become. Astrological houses are a very important part of the chart to consider. Planets in the houses tell about your potentials regarding specific areas of life.

The Ninth House is the house of philosophy, ethics, morality, virtue and wisdom. This is the field associated with clairvoyance and astrology, as well. It is associated with distant journeys, with living abroad, with foreign lands and people.

This is the house of explorers, spiritual people, the field of beliefs and cognition, knowledge and the thirst for knowledge, the field related to education, s scholar’s spirit, high education and else.

This field is also associated with the potential to influence great audience, usually through a written word, publishing and posting. Interestingly, this field also has to do with one’s second marriage and divorce.

The Ninth House is associated with fortune and success and especially with one’s preparation for great achievements on the professional plan. It is like an overture to the success that awaits in the Tenth House.

Since the Ninth House is the house of education and knowledge, career of people with an emphasis on this house would likely be associated with education, teaching and so on.

On the other hand, the very capacity one with an accentuated Ninth House possesses regarding knowledge and education would also contribute to the native’s professional success, whatever his or her occupation.

The Ninth House is associated with reputation, especially regarding the professional life and social status. When it comes to business and work, this field indicates collaboration with foreign people.

Trade, export, import and similar business have to do with this astrological field. The Ninth House is analog to fiery Sagittarius. This is a cadent and a Fire house.

The closest one to the Sun and the smallest of the Solar system, the planet Mercury plays an incredibly important role in astrology.

Being not very far from the Earth, in astrologically speaking, Mercury is a very influential planet.

It is one of the personal planets, primarily associated with our rational reasoning, our logical and practical mind. It is never too far from the golden Sun. We could call it a Sun’s most rational trusted advisor.

As the Sun represents our true self, our Ego, it could get seduced by many ambitions and drawn away into the realm of fantasies and far from reality. Mercury turns on our reason and logic; it provides the Sun with rational thinking and raw logic.

The quality of Mercury is cold and dry, while its energy is neutral. Mercury is neither a malefic nor a benefic, just as it is neutral when it comes to masculine and feminine planets and daily and nightly planets.

Mercury is a changeable and a flexible one, as it easily adapts and imitates nature of a planet it forms a strong aspect with. Its effect on a natal chart would greatly depend on the sign it matches. The aspects and the position.

This fast moving, intellectual planet is the ruler of Gemini and Virgo and exalted in Virgo.

Youthful and agile ancient god Mercury or Hermes was one of the popular ancient deities. He was usually represented as a handsome, young male, typically in motion.

Mercury was associated with trade, communication, messages, learning, youth and else. He was the smartest of all the gods and also the greatest trickster.

As such, he was the patron of ingenious inventors, of travelers and merchants, but also of tricksters and thieves, for instance.

In personal horoscopes, Mercury has much to do with our intellect and communication skills.

People whose charts are dominated by Mercury are very analytical and always on the run. They think about this or that all the time and, what is more, they could think and do more things at the same time.

These people are masters of multitasking and they are definitely not chaotic. They are systematical, very neat and precise. These are active and scholarly inclined.

Mercury people enjoy learning, exploring, getting informed and sharing information. Their perception and logic are brilliant. Mercury dominated individuals are very curious and cunning; they are generally liked by others, but not considered particularly reliable.

They often have great sense of humor, they lift the spirits and are positive. Being wise and clever at the same time, they could be master manipulators.

Verbal skills are often emphasized and it does not necessarily mean that they are spokespersons. Some of them are extremely skillful with pen; they could be amazing writers, columnists and else.

Others have amazing rhetorical skills and they are talkative, though very careful with choosing words. They could easily inspire other people.

Most of them do both very well. It is also about their ability to express their opinions in a direct, straightforward and concise manner.

Mercury people are passionate travelers, since traveling satisfies the thirst for knowledge, information and novelties. They like visiting places they have never been before and many of them dream about moving abroad or traveling around the globe.

They come and go and are difficult to cath. They are always full of information from all around the world and people could learn much from them. They are very flexible people.

This is explained by the fact that Mercury imitates the nature of the planets its creates aspects with. It manifests in the life of a Mercury individual as an amazing adaptation skill. They do not mind the circumstances and could fit into any environment.

Anything that appears new is a challenge and an opportunity to learn something, not a reason to complain. Mercury person would try to take an objective and logician0s perspective of things.

Mercury in the Ninth House – Mercury in 9th House

Mercury in the Ninth House makes one an adventurous, nomadic scholar. Mercury in the ninth field indicates great openness to the world, freedom of thinking, brilliant intellect and a very exact perception of reality.

On the other hand, spirituality is also emphasized, as well as an ability to think deeply and below the surface.

People with Mercury in the ninth field are lustful for knowledge; they seek for any opportunity to widen their horizons and learn more about the life and the world. Therefore, they are intellectual nomads.

They have a tendency to speak up their minds free and openly. They do not like any limitations when it comes to freedom of speech, for instance. They often stand for freedom of religious confession, speech, media and else.

These people are genuine freethinkers, ready to share their ideas with the world. They are versatile, philosophically inclined, curious and clever. A mind of one Ninth House Mercury person is dynamic and active all the time.

People with Mercury in the Ninth House would often contemplate over questions that have to do with a deeper cognition of the existing reality.

Besides all of these traits, a very philosophical mind, these individuals do not take everything in life serious, which is actually amazing. They are playful, friendly and they enjoy having fun.

Generally, their attitude towards the life and people is very positive and optimistic.

They enjoy meeting new people. They are open, relaxed and talkative; they are neither shy nor aggressive, but easygoing and good to have around. You could recognize them by their natural, attractive smile.

These people have a good sense of humor and they enjoy making other people laugh. Wherever they show up, they emit good vibes.

In addition, they have a good quality content to offer. You could laugh over a simple joke with them but also converse about deeply philosophical matters.

People like them and usually describe Ninth House Mercury ones as friendly, jolly and easygoing people who know many things about the world, who are intelligent, charismatic and good tempered.

Regardless of their true age, these people always appear as they are much younger. Their lively spirit is fresh and vital and they commonly appear much younger on the outside, as well.

Ninth House Mercury people are eager to learn more about the world, so they are versatile and have many interests. Science and philosophy are on top of their favorite subjects.

Their dynamic mind is not a burden, as it could be in some other individuals. Here, the native reaches inner peace through constant thinking.

Anything that could feed the mind makes them feel content and peaceful, even though it could appear very exhausting to others.

Distant lands and unexplored places attract them the most, as well as cultures and traditions they do not know much about. The thing is that they want to understand the people and the world we are all living in.

Their emotions are bound to their mental activity. The most intense feelings come with contemplating the grounds of existence, the purpose of life and other big existential and metaphysical questions.

They are not easy to catch, when it comes to relationships, nor they are very compassionate. They look at people with an intellectual’s mind and a curious one, spiritual also, rather than the eyes of a romantic.

Mercury in the Ninth House – Open and Impatient

When it comes to relationships and relations with people, these natives are restless, adventurous and impulsive.

They are quick tempered and impatient. They hate if anyone tries to limit their movement or whatever else.

They could be pretty stubborn about it, even if nothing serious was in question. They experience any restriction as if they were caged, so this could be very problematic when it comes to love life. Jealousy takes no place in their dictionary.

If you try to restrict their movement or any of their freedoms, be sure they would run away. They are very direct and open when it comes to their desires and needs.

These people would always say what was on their mind. If they were unsatisfied in a relationship, for instance, they would say it.

Their tendency to speak openly and directly about everything could easily turn into impulsiveness, as they have no patience to wait the other person to think through the subject.

Mercury in the Ninth House – Synastry

Mercury in the Ninth House synastry overlay is an excellent position when it comes to philosophical and intellectual questions.

Mercury in the Ninth House in synastry inspires questions and interest related to religious themes and the concept of faith.

These fields are of great importance when it comes to establishing a stable connection, full of mutual understanding.

Mercury transit in the Ninth House is associated with travel and jobs regarding publishing and literature. This period is favorable time for education; for example, it indicates a great and easy success in one’s studies.

You will graduate with excellent grades and get your diploma, for instance. Philosophical discussions will be very common. There is a possibility for going abroad.

There is also a chance you will be doing something related to mass media. The success regarding tourism, foreign trade, freightage and law are associated with this transit.

Depending on a particular case, things could go the other way around. There is a risk of an accident during a trip, a chance to lose the job and a possibility to face some law or bureaucratic issues.