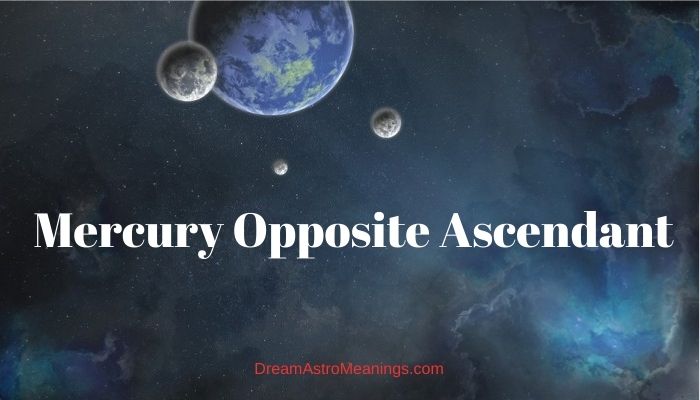 Mercury is actually an unusual planet because it has been a planet since the beginnings of astrology that is a regular exception to most rules and divisions.

Maybe it’s because of its astronomical trajectory, which is unusual and full of anomalies, with a lot of turns, acceleration and deceleration.

The parallel with the god Hermes is also obvious because the stories of Hermes are full of mischief and unusual incidents, and as a god from Olympus he is the only one who has access to Hades, the underworld. Because of his playfulness and mischief, he doesn’t always seem to be taken quite seriously.

And in astrology, Mercury is also somewhat underestimated, and in chart analysis it is often interpreted quite simplistically – as if its meanings are equally “elusive” and broad.

But he is usually the one who connects things, first of all the Sun and the Moon as our fundamental centers of identity, but also all the other “gods”.

Today, Mercury’s symbolism is usually associated with the human mind or way of thinking. It is equally connected with all forms of communication, and with transport or movement. Therefore, the most common connections of Mercury with trade, exchange, travel, brothers, friends, socializing, etc.

Language is our fundamental “map of the world” and connection to that world. And it is language in the deepest sense, perhaps even as a specifically human trait.

On the other hand, language and speech are a means of communication, i.e. changes in thoughts or information about the world around us. This is perhaps the more superficial (or “external”) side of language that we can find in some form in all living beings.

In short, Mercury has the function of a mediator between us and the outside world, but also connecting “us with ourselves”, i.e. with our deeper states. He stands between these two worlds and connects them.

Mercury is primarily a mental planet, and perhaps the most important feature of the thought process is distinguishing things so that they can recognize and analyze them.

We said in the description of the Moon how it symbolizes the images in our psyche that are the result of perception (visual, auditory, kinesthetic …). Mercury “processes” these images and creates mental and linguistic patterns that are abstracted and arranged images of perceptual or imaginary impressions.

In other words, Mercury creates an image (or map) of our reality, i.e. it is a way of interpreting and shaping a multitude of external impressions that are the result of visual, auditory, and kinesthetic stimuli, and which in themselves have no level of meaning.

By organizing these images or images, Mercury gives meaning or meaning to the world around us on a personal level – it organizes these images in a code that we can understand.

So this Mercury process is a two-way, iterative, or circular process, which describes the process of creating maps of our realities and that tells us something about how we experience the world, or simplified, how we think.

And language is exactly the map of all maps, the result of the experience of the world of many generations and as such it changes, develops and “lives” in each of us, no matter in which language we grew up.

Without that map of reality, we would not be able to communicate our thoughts and experiences, and our experience of the world would be impoverished. But language is also like collective memory, it allows us to experience or fit into our personal map of reality even what we have not personally experienced.

But as much as language enriches us on the one hand, so does the pattern that limits us, because our experience of reality moves within given language frameworks and only a few cross those boundaries. Maybe that’s why it’s said, “the more languages ​​you speak, the more you’re worth.”

Mercury is primarily a process of creating our maps of reality, which is directly related to the functions of the Sun and Moon: The Moon is a container or material in the formation of that reality, so the Moon is regularly associated with the memory of our experiences.

The sun, in turn, is the center or reference (starting) point at which Mercury begins to create maps. We could call it the center of consciousness that allows us to differentiate, but also to connect things in a certain way.

But we must always be aware that these maps are only signposts through the world, not the world itself.

It’s something most of us forget, so we often identify with our patterns without even trying to modify them to look at the lives of ourselves and others from a different perspective.

Our topic for today is Mercury. The planet closest to the Sun, burned by its rays, is small and very fast: Mercury makes a full revolution around the Sun in just 88 Earth days. This means that while the Earth goes around the Sun once, Mercury will have time to go around it four times!

He works the same way: he is bored of doing the same thing for a long time, so he likes to do several things at the same time or almost simultaneously – he will start doing something, then he will get bored, he will switch to a new one, then he will return to the first … He reads books two at a time. All this is because he has a lively mobile mind that constantly requires variety.

In previous articles I wrote that each planet has its own age of manifestation, which is most consistent with the nature of the planet. When I talk about a planet, an image involuntarily rises before my eyes that is associated with this planet.

So, the Moon is a small child, a baby. Mercury is no longer a baby. By age, this is a schoolboy, a student of elementary grades. A lively boy who is interested in everything, very light, agile and inquisitive. However, not necessarily a boy, it can be a lively cheerful girl: gender does not matter for Mercury.

Astrologers say that Mercury is hermaphrodite, that is, he has two sexes. Do not let this provoke sexual associations in you. The point is that the qualities of Mercury are universal, they are not related to gender.

Let’s say emotions are very strongly related to gender: the emotional life of a woman is very different from that of a man. Will, too. And Mercury – the mind – has nothing to do with s*x. It is generally accepted that the female mind is different from the male.

Astrologers do not agree with this: the mind of a woman and a man is arranged in the same way.

The only difference is who rules, because Mercury is compliant and easily amenable to external influence.

Therefore, when a woman turns on a strong emotion, then Mercury loses its objectivity and follows the feeling.

And there are also very serious occupations: doctor, teacher, and scientist.

All this is work for a living mind, the only difference is in the degree of development of the soul – the more mature the soul is, the more seriously a lively and active mind chooses for itself.

So, Mercury is a very young creature. It seems to me that the best example of Mercury is Pinocchio. He also has a Mercurian nose – inquisitive. And the Mercurian type remains alive, mobile and very young – a boy or a girl until his death.

This is a clever traveling salesman, and a crook, and an apprentice, and a servant. He is a seller, a shopkeeper, but not a respectable merchant – this is Jupiter – no, Mercury is a small trader.

But he has more serious things to do: he can be an intermediary, a sales agent, a consultant.