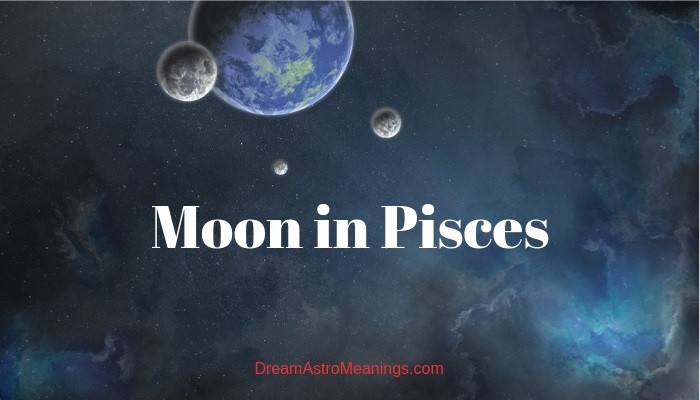 The most common explanation of its occurrence is that it formed from the debris caused by the impact between Earth and the astronomical body Theia.

Its rotation with Earth is synchronous and it always shows the same side to Earth, the near side. The far side of the Moon can never be seen. It is the second brightest body in the sky, following the Sun. The Moon’s gravity influences the ocean tides as well as the Earth tide.

The USA had the first man mission on the Moon in 1969 and repeated these missions six times during the period 1969 and 1972. After the last mission in1972, the Moon was only visited by spacecraft without a human crew.

In astrology, the Moon is the planetary ruler of the sign of Cancer. This planet demonstrates our subconscious content, our personal needs, our basic instinctive reactions and our habits. The Moon in our natal chart shows the person’s instinctive reactions. It also indicates how a person deals with problems and personal issues they encounter in their lives.

The Moon rules the tides, and symbolically rules human tides, the increase and decrease of energy. It is a mediator between our inner and outer worlds. It rules our habits and our beliefs, as well as our prejudices and our spontaneous and uncontrollable reactions. While the Sun represents our rational behavior, the Moon represents our instinctive behavior.

Moon rules all our intuitive insights, instincts, and unexplainable hunches. It is also responsible for our moods and moodiness. Moon also rules our expression in different forms, through some kind of art, or creative work, etc.

The Moon is responsible for keeping the past in our lives, through memories and feelings, and the Sun rules our present moment, and is unaware of the past.

People ruled by Moon are prone to introspection; they are adaptable, protective, and sentimental. They are often behaving irrationally, moody, and are restless.

The Moon’s placement in a certain sign describes our response to our environment, and our instinctive behavior and habits, which we display mostly in our home or with the people who are closest. The areas ruled by the house where Moon is placed in our natal chart are the ones where we feel most comfortable.

Men with Moon in Pisces are usually very emotional and sensitive to the suffering of all human beings. They can possess strong intuitive powers and ability to heal people. These men seem to feel what others are feeling and they are prone to change their mood accordingly.

These men are often very creative and artistically gifted and are able to express their personality through different forms of creative expressions and art.

In some cases, these people have very expressed healing powers and make healing and helping others their profession. They should be careful not to allow other people’s negative energy invade their inner space because they can have serious problems in letting this negativity out.

These men love nature and enjoy spending their time there. They don’t like crowded places where there is a mix of different energies which might be overwhelming for their nervous system.

They should take time off to recharge and release the accumulated negativity; otherwise, they might experience emotional breakdowns, and inability to deal with their reality and the requirements of other people.

They might be prone to dealing with these issues by using some extra stimuli, like drugs or alcohol, which only make them feel worse.

These men should learn how to protect themselves from the excessive energy of other people they are often exposed to and take time to release it from their system. They shouldn’t allow it to accumulate because it might make damage to their emotional stability.

Women with Moon in Pisces are as sensitive as men born with this placement.

They intuitively sense other people’s energy as well as the energy of a place. They are nurturing and caring beings always ready to help people but that might become overwhelming for them because they often don’t know how to protect themselves from the excessive energy some people and situations are emitting.

They need to learn a way to protect their wellbeing while helping others. These women are so sensitive that it’s easy for them to become emotionally overwhelmed and afterwards it often takes a lot of time for them to recuperate.

They are usually very romantic and prone to idealizing their partners. They have an emotional ideal they dream about and often end up getting the man of their dreams.

The main reason is their ability to visualize the things they desire to happen and daydream about them.

The good traits of Moon in Pisces:

The bad traits of Moon in Pisces:

– escapism, dependency, prone to depression, self-indulgence, easily overwhelmed by negativity and strong emotions, prone to drugs and alcohol to help them forget about their problems, etc.

People with Moon in Pisces are usually very emotional and can appear almost dreamy.

They are very sensitive and can feel the feelings of other people around them as well as their mood. They easily sense the energy of a space and their mood can change accordingly.

When there is negative energy around them they tend to feel an overwhelming desire to escape and leave the space.

Often they pick up on other people’s moods and cannot discern whether they feel in a certain way or is it some feeling they have picked up along the way.

These people need a stable and balanced surrounding to be able to feel comfortable and relaxed. Quarrels, conflicts, aggressive people, negative energy, etc. all these things influence their mental stability and can jeopardize these people’s emotional balance and wellbeing.

These people are often very creative or at least exhibit love for arts and beauty. They love all people and are always ready to help. They consider everyone as equal and don’t make differences between people considering that they all equally deserve their attention and help.

These people are emphats with an ability to sense other people’s emotions and instinctively sympathize with them. In some cases, they are able to almost physically feel the pain others are suffering and intuitively know the means to make their lives easier.

Because they have a tendency to store inside other people’s negativity, they need to frequently take time off to recharge and release the accumulated stress.

In some cases, these people could be prone to escapism and avoiding dealing with emotional issues up to a point they begin to cause great problems in their lives.

These people are very romantic and often have an idealistic view of relationships.

They can be prone to idealizing their partner and seeing them in a different light than it actually is. They are usually very compassionate, romantic, idealistic individuals.

These traits are often the cause of disappointments these people experience.

They usually have a strongly developed intuition and many of them have psychic powers, which they use to heal others and help them in other ways. They usually have good judgment of other people’s characters simply relying on their intuition.

Their likes and dislikes of people and situations are immediate and they have an urge to react accordingly.

These people usually begin exhibiting these abilities since their young age. Many of them have an inner knowing of things that will happen in the future.

People with Moon in Pisces have a vivid imagination. They are also prone to daydreaming and creating their ideal lives in their minds. They are very good at visualizations and don’t have a problem manifesting their desires into reality because they can believe that their dreams will become real one day.

Many of these people are gifted artists who are able to express themselves creatively through different forms of art and creative endeavors, like music, photography, film, writing, dance, painting, poetry, etc. If they don’t actively perform arts, they are usually art lovers.

These people are usually very spiritual and are often in a quest to expand their spirituality further. They have their own ideas about religion and the Divine and their beliefs can often seem awkward to other people. They have an inner ability to get in touch with the unseen forces and receive important insights regarding their future, but also regarding the future in general.

In many cases, these people could be prone to illusions, especially of romantic nature and deceiving themselves about things which most likely will never become true. If Moon has bad aspects in their natal chart, they can be prone to be deceived and lied to by the people they consider close, or they could have a manipulative and deceiving nature.

Many of these people often have the need to retreat from everyone to recharge their energy and distance themselves from the harsh reality. They are very sensitive and strong emotional experiences can severely damage their emotional balance.

These people are usually very compassionate and enjoy doing well for others.

They are usually selfless when it comes to helping others and they usually offer their help without expecting anything in return. They need to learn to protect themselves and their interests because many people could perceive them as naïve and use this trait of theirs for their own benefit.

Some of these people could have difficulty in dealing with the harshness of their reality and prone to escapism in alcohol, drugs, and similar things. They can also be prone to become dependent on other people.

People with Moon in Pisces are usually very sensitive and sense what other people are feeling. It is hard for them to ignore the energy of a person or a place, and they have a tendency to absorb it into their system.

In turn, that energy begins overwhelming them and threatening their emotional stability.

Because of their strong intuition and psychic powers they often possess, these people are sometimes able to see far into the future as well as to help others using their healing powers.

During that process they need to pay attention not to absorb the negative energy of their patients and get rid of it as quickly as they can.

These people have a humanitarian nature and enjoy helping others. Their ability to sense other people’s hurt helps them in finding the right approach and helping method. Their kind and helping nature make them an easy target for emotional predators who might use their naivety to manipulate them for their own good.

These people can be very idealistic and believing that all people are good and kind, which often leads them to disappointments and sorrow.

They also tend to idealize their romantic partners and fail to notice some deal-breaking traits, which in the end often proves to be detrimental for their relationship.

Their sensitive nature and inability to deal with stress and strong emotions often lead them to drugs and alcohol. They need to strengthen their confidence and ability to avoid negativity.