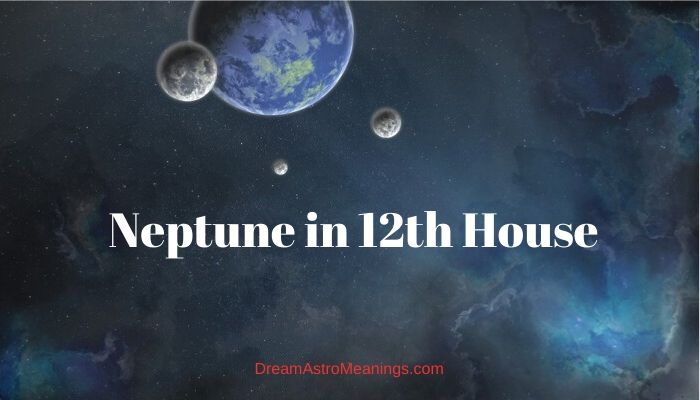 People have been looking into the starry sky for ages and ages, in search for answers to questions about our very existence and destiny. Could stars tell something about your life?

According to astrology, stars hide all the secrets about our individual lives. Natal charts are diagrams astrologers use to interpret our starry destinies. These charts were divided into twelve fields.

The fields are called houses and they were one of the basic elements of natal charts. Each represents a segment of life.

The native’s individual experience of a particular segment of life depends on the planets settled in these houses, at the time of the native’s birth.

We reached the end of the zodiac circle, settling in the Twelfth House, if it could even be said that a circle has an ending. Well, the twelfth field was the last one on the list and, according to many, one of the most important houses. All houses were important, though.

What the Twelfth House was about and why do some call it the House of the Subconscious or the Unconscious?

The Twelfth House is associated with everything hidden, mysterious, imaginative, abstract and secret. This is the house of the immaterial, invisible, elusive and untouchable. Dreams, intuition, subconscious and unconscious all have to do with the twelfth field.

Well, the Twelfth House is analog with Pisces and it is one of the cadent and Water houses.

This field is linked to the past and the spiritual journey, spiritual growth and enlightenment. However, this is also the field of deception and self-deception, the house of hidden enemies and threats.

The twelfth field is associated with loss, isolation, solitude, debts and poverty. Lost things are to be ‘found’ inside the Twelfth House.

Isolated and secluded places and locations are linked to the twelfth field, places such as hospitals, prisons or monasteries.

Interpreting the Twelfth House, we get in touch with many questions regarding the karma of an individual.

The Twelfth House has to do with everything that was taboo and forbidden, such as secret love affairs, for instance. The twelfth house could tell much to those whose relationship status or romantic life in general was complicated.

As for other secrets it hides and reveals upon interpreting it, the Twelfth House is associated with both hidden strengths and weaknesses of the native.

Neptune was a god associated with water, in Roman mythology. The theology of Neptune could not be reconstructed completely, mostly because the deity was identified with Greek Poseidon very early in history of the worship, so it is difficult to distinguish the two.

The story of Neptune could be told through the mythology of Poseidon.

Well, it is very likely that Neptune and Poseidon were originally deities of freshwater and not of the sea.

For example, there was a festival called Neptunalia, in Roman tradition. Neptunalia took place amidst the hot summer season, in July, and it was meant to please the god provider of water.

Neptune was understood as a god to give people enough water safely to live through summer draughts, without damage and loss.

The dominance over the seas is associated with the genealogical myth of the ancient gods. According to Greek mythology, Poseidon, Greek counterpart of Neptune, was one of the sons of Cronus and Rhea, the Titans.

Cronus (Saturn in Roman mythology) was anxious about the prophecy about some of his children overthrowing him; since he did the same thing to his own father and took the throne.

He was eating his children, so to prevent them from bringing him down. Unfortunately for the cruel Titan, his son Zeus was hidden by Rhea (Jupiter, in Roman version of the myth).

It must be noted that the new sea lord was not greatly pleased by his prize. Poseidon was said to be quite a volatile and aggressive god, hot tempered and violent. His nature was moody and unpredictable and he often fought his brother Zeus and other gods. He lived in a golden palace below the sea and he rode a chariot driven by giant golden-mane horses.

His horses were so strong and fast that his vehicle did not even touch the sea surface when he rode out of his underwater home. As for the horses, there is another interesting belief.

Poseidon was also considered the god of the horses, even before he was associated with waters. He was believed to have created the first horse.

There is no such connection with Neptune, although there was a mention of Neptunus Equestris, which would mean Neptune of Horses. However, it is likely that it was another Roman deity, originally associated with horses and reinterpreted under this name.

Either way, we have Neptune as the god of the sea and it how most of people see and understand this deity nowadays.

The water element is the meeting point of Neptune the god and the planet Neptune, which we are going to talk about taking the astrological point of view. Let us see what Neptune, the blue planet was about.

The blue planet Neptune is one of the modern planets, meaning it was discovered in more recent times, compared to the first five planets, besides the Earth, of the solar system ancients knew about.

Transcendental planets are associated with what was beyond both purely personal and intimate and social. As such, Neptune represents the higher octave of Venus.

Planet Neptune does not have much in common with its divine counterpart, the god of the sea, at least in its demeanor, so to say.

Neptune’s influence is pretty subtle. Neptune is one of generational planets, considering how distant and slow it was, from our earthly point of view. This means that Neptune affects generations of people and not only a single person.

For this reason, some people do not pay much attention on its activity, since it does not shape up one’s personality and destiny to a degree personal planets do, for instance.

However, all planets matter, when it comes to natal charts. Neptune could form strong aspects with other planets or its position could appear more effective, so to say. In any case, this planet is a tricky one.

Neptune is the planet of illusions, delusion, confusion, dreams and fantasies; it is the planet of imagination and intuition, healing and poisoning. Artists, musicians, priests, gurus, healers of all kinds are people under Neptune’s patronage.

Neptune is the ruler of Pisces, the most romantic, imaginative and dreamy sign of the zodiac. Many would agree on Pisces being the most mysterious sign, as well.

Neptune guides you through realms beyond the earthly life or it allures you into a fantasyland. Its touch could be a curse or a blessing.

Neptune in the Twelfth House – Neptune in 12th House

Deep waters and dreams, Neptune in the Twelfth House suggests. Neptune in this placement indicates incredibly powerful intuition and the power of imagination. This position is associated with inner strength and faith.

People with Neptune in the twelfth field could be incredibly strong, although they usually appear gentle, calm and soft on the outside. They are idealists and believers.

In times of need, these individuals are capable of gathering unbelievable strength from within; they could stand strong and calm, when all others lose their heads panicking and wasting energy.

These natives are faithful. They are believers and highly spiritual people; it does not matter which kind of a spiritual path they opt for. One way or another, their faith is their strongest fuel.

These natives are highly intuitive and imaginative, capable of reaching depths of the transcendental rarely one could. If they nurture their spirituality, they are happy.

They could be calm on the outside and typically very quiet, but they would offer you a comforting shoulder. They are compassionate and caring, in their own way. In times of crises, they could be fantastic spiritual motivators.

With good aspects of Neptune in the Twelfth House, natives tend to be hopeful and they could restore others’ hope in better days. We cannot say they were optimistic or pessimistic in a transparent way.

If they do not deny their spiritual nature and let them guide, these natives let their imagination flourish. They could find amazing channels to express their immense spiritual capacity.

On the other hand, their quiet nature could lead to self-destructive introvert behavior. Neptune in the Twelfth House natives are sensitive and emotional people and some of them would keep their feelings inside, which is not always the best option.

Some of them are unwilling to express their feelings or thoughts directly and are haunted by guilt.

This could lead to the pattern of avoidance, so the native loses touch with reality. These natives are especially prone to escapism, due to their self-defense mechanism. It often ends up badly, because they become too vulnerable even to normal, regular changes that come their way.

This also happens because they try to deny their own spirituality and doubt their inner strength. The truth is that the strength lies inside, but you have to believe in it.

This self-doubt and spiritual insecurity could strike people with Neptune in the twelfth House more than other people, because everything revolves around such concepts and questions.

The key term for natives with Neptune in the twelfth field is faith, belief. You have to believe in yourself.

The problem is that the dream Neptune and the even more perplexing House of Subconscious often make the impression of everything dissolving, everything being all and nothing and it makes the native think about the purposes of everything, often making it even more difficult to find one.

Some of the natives with this placement of Neptune find their faith and spirituality later in life, which is, of course, a good thing. Some have been aware of it all their life, but they needed first to build a stronger identity, so they could accept, handle it and express it.

In any case, a journey with Neptune in the Twelfth House is one of a spiritual sort.

Neptune in the Twelfth House indicates an idealistic point of view. People with this dreamy and sometimes overly romantic combo tend to idealize life, which could lead to ignoring the real life or pretending reality was not what it is.

Well, a little bit of fantasizing about valiant knights that would save the day and chivalrous world is not a bad thing. It is very desirable, in fact. Ideals are inspiring, driving, and pure.

If you can think of it, it exists, if nothing else, then as a concept.

However, do not let Neptune leads you astray, deeper and deeper into Twelfth House’s caves of sparkling illusions. You have to stay aware of reality and things as they are.

With Neptune in the twelfth field, you have a rare gift of a highly imaginative mind and soul; just do not employ it at the cost of the common sense and the perception of reality.